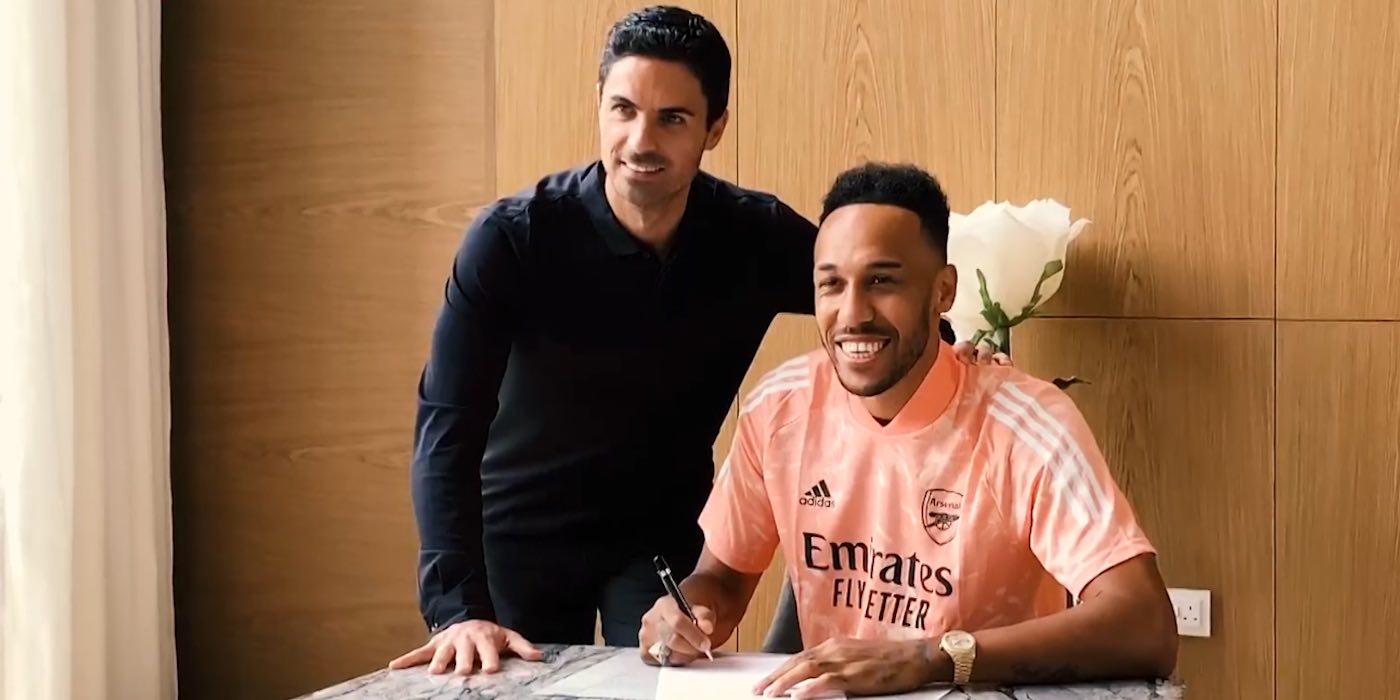 Ahead of tomorrow’s game against West Ham at the Emirates, Mikel Arteta ‘met’ the press (over Zoom), and not surprisingly a lot of the questions revolved around Pierre-Emerick Aubameyang’s new contract.

The captain committed his future to the club, signing a three year deal this week, and putting to an end the ‘Will he? Won’t he?’ speculation – although to be fair it was more about ‘When will he?’ in the last few weeks.

The Arsenal boss said he was pleased for the fans to secure the services of the leading goalscorer, and spoke in glowing terms about how much he enjoys what he brings to the team and the club.

“I am really pleased to have convinced Auba to stay at our club,” he said.

“It is a joy to work with him, I think we have a really transparent relationship. We have been really clear with each other on what we were trying to do, how big Auba was to my plans for now and for the future and the way he trains, the way he behaves himself and the way he performs is exactly what I want from him.

“I want him to do that consistently for the next few years.”

Aubameyang made it clear that Arteta’s desire to keep him and his vision of what the future holds were a key part of his decision making, but the boss played down his personal involvement.

“I think the big reason Auba is staying is because we have an incredible football team, football club, we have some fantastic people working here and because he feels how much love he has from the fans,” he said.

“I played my part, which is part of my job, to try to explain to him what we are trying to do and how important he would be while we are building and that is it.

“The club has to take credit for that and the people who have been able to put a project and a package to him to stay at the club.

“It took a lot of work and a lot of effort from the club, so thank you very much for supporting us as it was key to achieving it.

“It was a thing that was worrying me because it is so hard to find a replacement of a striker of that calibre, so I am really pleased.”

Arteta seems as classy as Wenger ?

He’s got the minerals!

He also got his Mojo

If this was say, Brendan Rogers, he would just be gassing himself up saying he was the reason auba stayed. Arteta praised the club, even though we basically know it was him.

That’s the difference. Arteta is here for the long haul. Classenal.

I hope you’re right that Arteta is here for the long haul. And I hope the owners back him up. All the signs are that there really is a solid rational plan to take us to the top again. I trust Arteta completely. But I’m still worried about the Kroenkes

The Lamp said he did the critical job in bringing Werner to his club.

no, we don’t know if it was because of him. it’s ok if you want to develop a cult based around arteta, i really like him too, but i think you’re being really unfair to the rest of the people working at the club. everything good that’s happened lately has been credited to arteta, and the other 500 workers at the club seem to be just anonymous personnel that does nothing. at the very least you can think he stayed because of arteta, but actually “know” that was the reason? jesus get some pressure off him and credit the effort… Read more »

Cannot bear the sight of that toothy one. Too full of himself if you ask me, just sayin’.

Hats off for having a non-mainstream opinion.

Our captain and manager. Both likable, hardworking and personable. Can’t wait till fans are allowed back into The Emirates to show their appreciation.

I’m hearing the contract requires Arteta to do a front flip when champions League is attained and Auba provides the coaching.