Arseblog News – the Arsenal news site
Home Staff Manager Arteta: Martinez had a very good offer, so we allowed him to... 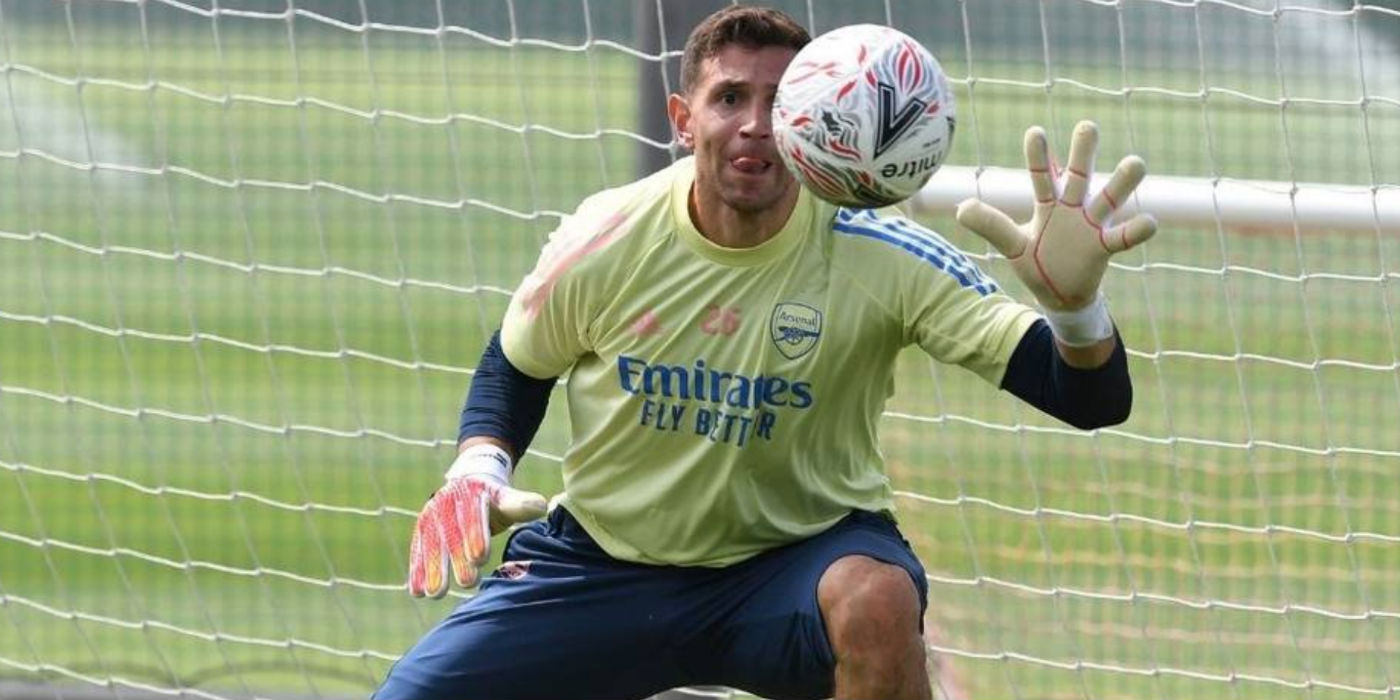 His departure came after conversations with Mikel Arteta, in which the boss made it clear to him and Bernd Leno that he viewed them both on the same level and wanted them to fight it out for the top spot.

However, the package on offer from Villa was something the club had to consider from a financial perspective, and that it was something Emi wanted himself to fulfill his own ambitions resulted in his eleven year spell in North London coming to an end.

Arteta was asked what it was that made him choose Leno as number one, and replied, “I was very clear with both of them that it wasn’t a #1 and a #2 and that they had to compete for the place like any other position in the team.

“To be fair, Bernd was superb before he got injured at Brighton and Emi was absolutely excellent with all of the games that he played and how much he helped us as well with winning the trophies.

“But at the end of the day, that created a big competition, some big expectations from both of them and we had to deal with that. I had many discussions with him and I think we all finished in really good terms.

“We were really open, trying to have those discussions and at the end, Emi had a really good offer, really well-suited to what he wants to achieve long-term and short-term and we allowed him to leave the club.”

The final aspect of the deal – receiving £20m for a player who a few months ago would have generated a fraction of that – was something Arteta had to consider in the context of players we’ve brought in and further additions to the squad.

“At the end of the day we have to find some balance between what we want to achieve with our squad and our finances,” he said.

“It gets to the point where if you want to achieve certain things, you need to sacrifice others.

“Time will tell whether we are weaker or not and obviously the recruitment we are planning to do to try and get our second goalkeeper, they will hopefully bring a really good performance level.

“We can see Emi being successful at Villa and we are all happy for him.”

The arrival of Runar Alex Runarsson is imminent according to the Arsenal boss, but he had to be registered by 12 noon today to be eligible for tomorrow’s game, so Matt Macey will deputise for Leno against the Hammers.

You need to sacrifice others. It tells we are in for a big signing.

Emi served us well and also fetched us good tranfer fees. Hope his form only dips while playing against us with all team giving him hug after our win.

It does look that way. Getting impatient.

Strictly speaking, the money from the Martinez fee has been swallowed up on wages for Willian and the increase for Auba, and then there’s the money paid for Gabriel. I think that there will be further signings but I guess these will ultimately be paid for by (hopefully) offloading the likes of Torreria and Kolasinac – who are likely to raise “fairly respectable” sums in the current market conditions (compared to, say, Sokratis and Mustafi who won’t, for a variety of reasons).

Update: from the latest story about Arteta’s views on transfers (on this site):

“We are trying all the time to adjust the squad in the most efficient way. It is clear at the moment that it has to go both ways and in order to achieve that we still have some time but we are pretty clear in what we are trying to do.”

Good luck Emi. Now don’t go out proving things and giving man of the match performances when you play us. We already know how good you are, nothing to prove here.

I have faith in him that he will keep 30 clean sheets and play 2 howler games against us.

“At the end of the day we have to find some balance between what we want to achieve with our squad and our finances, It gets to the point where if you want to achieve certain things, you need to sacrifice others.Time will tell whether we are weaker or not and obviously the recruitment we are planning to do to try and get our second goalkeeper, they will hopefully bring a really good performance level.”

In other words, he’s saying we have to cut our squad “coat” according to our financial “cloth”. If we can offload some of the (several) surplus players we have for reasonable money, we can bring one or two in.

Good business, with a touch of good fortune/timing given the form that Martinez showed when taking over from Leno. It’s very difficult to keep two goalkeepers happy if they’re both on good form (or potentially, anyway) so, unfortunately, one would probably have to go. That said, it doesn’t look like Arteta has given up on Raya from Brentford, although he would probably cost an increasingly large chunk of the Martinez fee if we did get him. Don’t know a lot about Runarsson, but he doesn’t look that good from reports – but you never know. Interesting times.

Considering how difficult it has been to move unwanted players on, £20mill for Emi is a great result for the club and I hope a successful move for Emi.

I hope they bring in a great second goal keeper. It takes an injury to Leno for us to finish out of top four. People are talking about saving money on Emi’s transfer but I disagree. Use the money to get a very very good keeper. Another keeper than Emi and it could have been bye to FA cup.

By the same note if we didn’t trust our youth system Emi wouldn’t have been there anyway and he was brought in 10 years ago for next to nothing. Hein.

In my opinion he will be at Villa for maybe 2 years before being bought by a top club. He’ll be 30 then and we all know with goalkeepers they can go on same quality level for bit longer. I hope he does get a European top or semi top club, 2 good seasons and a few call ups to Argentina and I have no doubt Emi will finish career at the top somewhere. Preferably outside England!
Top guy, top keeper!

We have options. Macey and Iliev plus if we bring in Runarsson for 1.8m.

We’ve produced some decent keepers recently with Szscesny (Can’t remember how to spell his name anymore) and Opsina also great alumni at Juve and Napoli respectively.

Fabianski, although sadly after he left us