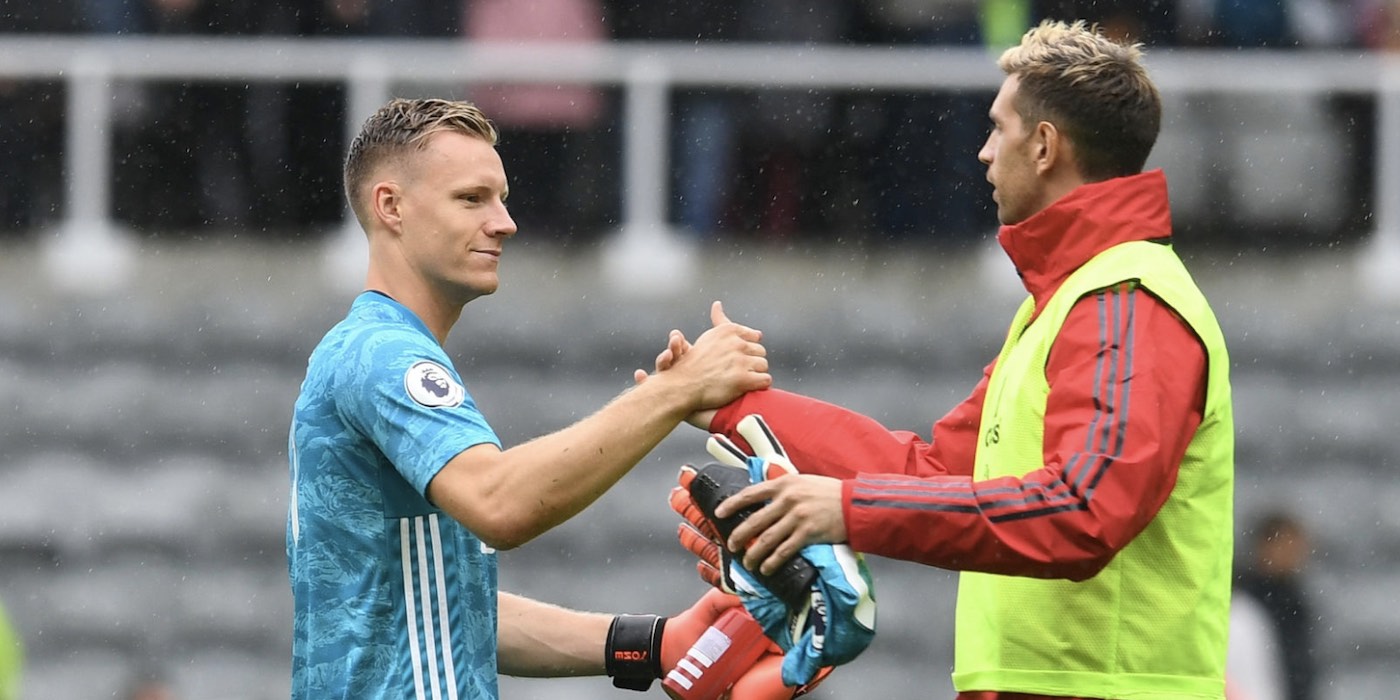 One of the big team selection issues for Mikel Arteta for the start of the new season is who gets the nod in goal.

Bernd Leno was the clear first choice last season but, having deputised brilliantly for him after the injury sustained at Brighton, Emi Martinez would feel hard done by to lose his place.

Some have speculated that Leno’s selection would precipitate his colleague’s departure as he looks for regular first team football, on the back of strong links with Aston Villa over the last week or so.

However, the Arsenal boss denied that tomorrow’s selection is an indication that the starter is the undisputed number 1 at the club.

“No,” he said when asked  if that were the case. “I don’t treat the goalkeeping position any differently to the others.

“I think the one that in my opinion is training better with the goalkeeping coach has the better chance to start tomorrow and my decision will be consistent like that throughout this season.

“Then it’s for the other one to push and make him better and when his chance comes, be ready and help the team as they both did last season. Both were fantastic in my opinion.”

Pressed on the potential departure of Martinez, Arteta played his cards close to his chest, saying, “I cannot stop all the speculation that we have about all our players coming in and out.

“I don’t want to comment on any individuals at the moment without having the right answers to give.”

The Gunners will be without David Luiz and Sokratis for tomorrow, meaning one of the young central defenders is likely to start, but who keeps goal behind him is a question we won’t have answered until an hour before kick off tomorrow.

Arteta also answered questions about Alexandre Lacazette who has been mentioned as a possible departure during the window.

He seemed to hint that the striker’s future lay in North London rather than elsewhere.

“He is really happy here, he wants to keep improving and contributing to the team,” he said.

“I know how good he is, the impact he is having. He knows about the competition he has with the front players, and again he needs to demand of himself to be the best striker at this football club, the same as the rest.

“He was very happy to hear that and the way he has been training and conducting himself has been excellent.”

Check out the season preview Arsecast

I would be very very sad to see Martinez go. I just feel he “gets” it..

But is he though?? I’m shocked by how confidently people are saying that off the back of 10 or so games, vs Leno’s excellent two seasons.

Emi is getting a huge bump with the fans due to the romantic nature of his story – career back up & long time servant of the club gets his chance and leads club to glory. That said Emi is one of the best keepers in the PL the past few years so there is simply no way that Emi should just be handed the #1 without having to fight for it. He might turn out to be an excellent number 1 but we do this with players where we build them up to be world beaters on the back… Read more »

##Leno is one of the best keepers in the PL.

Oh I very much remember Joel Campbell, but that was an even more extreme version of what we’re seeing with Martinez. People were saying he should start because of a couple of half decent league cup performances, Lucas Perez was another.

He is not. Just a bit taller.

I really hope they keep Lacca. He is a pain to defend against, great at holding it up and linking. He had a bad run with injury and finishing, but I think his quality will show this year. He is the BEST at turning in the box in zero space. Nketia is nowhere near yet, though hopefully will improve.

Yep hope he stays and gets back to his beat

I think this notion that a goalkeeper gets picked on how well he trains in the week is absurd. Sure, if his attitude is poor for whatever reason but how do you measure a goalkeepers performance in relation to a game. How many times in training for instance are they going to be commanding their areas and dealing with pressure moments. I’m becoming really twisted by this. Seems everything is always stacked in a way that works against martinez

Martinez has made zero errors and lost just two games since coming into the side. He doesn’t deserve to lose his place, let alone be sold to relegation-candidates Aston villa.

I’m not sure your last statement is true.

If Martinez performs in training, then he gets selected to start – it’s as simple as that.

Both Emi and Bernd are top quality goal keepers, we will need both for this season’s campaign.

I think goalie is a little different. If one guy isn’t putting the work in then fair you drop him, but I’d be surprised if Emi or Leno behaved like that. You want your keeper and defenders to get an instinctive understanding of each other and a huge trust which you get from consistent playing time. I’d be perfectly happy selling one as both are too good to be second choice and then getting a Mart Poom on a free or promoting one of the 25 gk prospects we seem to have. The fad for two top goalies just seems… Read more »

Like i said in some of my comments yesterday on a post regarding martinez, i feel he is just afraid of the competition and threat leno poses so he want a guarantee as the number 1, i have the feeling that martinez will be starting tomorrow but the fear of losing the number 1 spot to leno on the long run is what is making him seek pasture new, if he is so sure of himself and his ability or believe he is way better than leno then he should stick around and prove it by fighting for the number… Read more »

He is also on a low salary compared to Leno, at least Arsenal should make his salary that of a number 1 GK with regards to Marrinez.

He was offered a new contract on 75kpw or so, that is if am not wrong but he doesn’t want the money, all he want is the number 1 spot without fight and guarantee that he wont be displaced and returned to the number 2 spot when it wasn’t as if leno has been bad at his job, i like martinez but he should be ready to fight if he think he deserves the spot more than leno. We need to ask ourselves why we have just aston villa and now brighton on the queue and no top club fighting… Read more »

In my view Emi is the player in possession. That’s not Lenos fault just how it is. Emi has done 0 wrong and so should keep the gloves and start tomorrow.

So what was leno’s fault to lose the number 1 spot to emi, getting injured i guess, when leno was the only 1 saving us week in week out under emery(1 of the consistent players we have then, mayb he and auba week in week out carrying the team on their backs) and at a point when the defence is 1 of the worst in the league no 1 is crying out for martinez then n now that he got his 10 matches emiliano got talent to fame we are forgetting who has been there for us when everything was… Read more »

As for Lacca I really don’t think a team with pretentions for Top 4 and an extended run in all competitions can go into the season with 1 international/experienced striker. So he should stay and I think he does an awful lot off the ball and creates space for Auba and drops back into midfield.

We need to ask ourselves why we have just aston villa and now brighton on the queue and no top club fighting for his signature or did they all have better keepers than he is (what if we decide to put leno in the market will we also have just Aston villa and Brighton or even no club coming in for him, lets all think about it)

I hope Laca takes the challenge headon and comes out LANS this season!

Same here, i hope he does if he does not get sold and i wish he get hungrier for goals and not just settle for tracking back and out muscling his opponents, 15-20 goals from him in the league is not bad to ask or am i way over my head

Leno cost more so kroenke will demand that he plays.

First big mistake by Arteta. Martinez catches and can pass. Leno can’t do either but makes great “photo” saves…