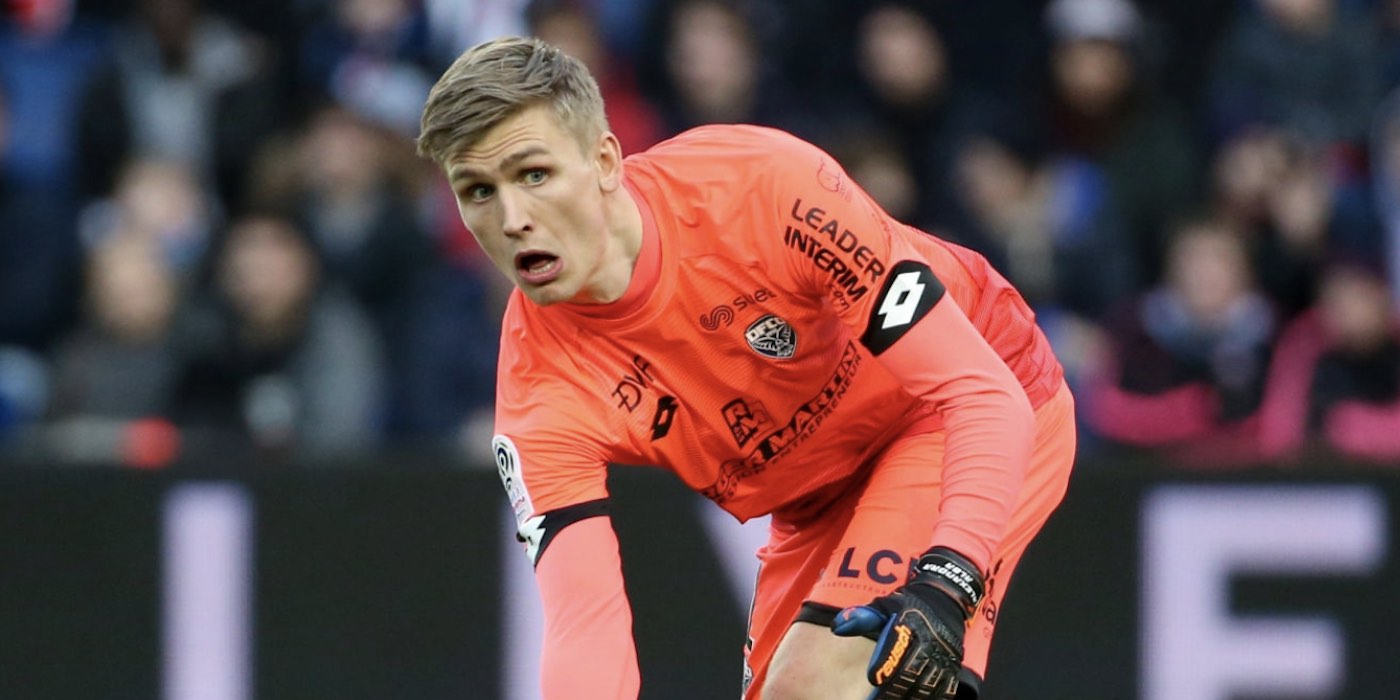 Mikel Arteta has more or less confirmed stories that Arsenal are set to sign goalkeeper Runar Alex Runarsson from Dijon.

The 25 year old has been linked with a move to North London to fill the gap left by Emi Martinez signing for Aston Villa, and from what the manager said it seems like it’s going to go through in the very near future.

A fee of around £1.5m has been mentioned for the Icelander who lost his place in the Dijon team, and is keen to work again with goalkeeping coach Inaki Cana Pavon.

“Obviously with the departure of Emi, which is a big loss, we have to replace him and we’ve been looking in the market.

“I think we’ll shortly be in a position to announce our new signing.”

Pressed on whether it would hours or days, the Arsenal boss wouldn’t be drawn, but it does appear is this is one which is almost over the line.

There have also been reports of multiple bids for Brentford’s David Raya, and while he didn’t go into specifics, Arteta didn’t rule out a move for another keeper because of doubts over the future of Matt Macey who, last week, suggested it was time for him to leave.

“Well, it depends on what happens with our third goalkeeping position as well, because we’ve had some talks about that in the last few months, and things can change.”

Runarsson promising to work his Runarss off

I would prefer having a youth keeper as 3rd choice then buying a 3rd choice, assuming Runarsson will be 2nd.

Var Will Solve The Problem
Reply to  Rens

Daveo
Reply to  Var Will Solve The Problem

Well his Dad was an Icelandic international midfielder – an actual Runar in midfield. Son of a Christian FWIW (Runar Kristiansson). Maybe we are signing the wrong Runar?

Sidenote: Does this mean if Runar has a son he will be Runarsson²?

Var Will Solve The Problem
Reply to  Daveo

So you are telling me it Runs in the family?

No, he will be Runarssonsson, obviously.

Though actually No to Gunnersaurus as 2nd choice keeper. Everytime I’ve seen him practice penalties at the Emirates his got beaten by 5 year olds

Seriously: yes. And, if a daughter, her last name would be Runarsdottir.

Hi-Jay
Reply to  Var Will Solve The Problem

I read somewhere that he used to be an outfield player until sometime in his teens when he switched to GK.

Most professionals can play all the positions I think. Cashley was a winger, Lauren was a midfielder, so was Toure. Cech was a striker etc etc

This sounds false regarding the 3rd choice situation. Runarsson must be either brought in as 2nd choice and promised game time in the cups OR he is brought in as 3rd choice.
We have Karl Hein who is 18 and already starting for the Estonian national team which sounds like he is good enough to be 3rd choice for us.

The spoon
Reply to  Steinn

If Macy was considered good enough for 3rd choice, then Hein must be, I know they rate him highly. Unless he’s going out on loan.

Wow got that sorted pretty quickly which is good but I do wonder what sort of back-up he will provide? I don’t know much about runarsson but some of the comments about him seem a bit negative or am I reading too much into it!!!

A few discussion points on this: I must say I’m not convinced by Runner Son of Runner. Reports on him aren’t great and this smacks of bias from out GK coach (as does our pursuit of Raya). I’m not saying he’s a bad coach or even a particularly bad judge of talent. But the lack of scouting concerns me a little here. We’re going for someone we know rather than scouring the market for perhaps better talent. The one thing I like is the price. He’s cheap and I think Andrew (Blogs) summed up the number 2 goalie options perfectly… Read more »

While I agree with your budget concerns, I think we have to give our club a little bit more credit here. Either the money is there to buy a good 2nd goalkeeper and still maintain the pursuit of our main objectives or the stories are lacking validity. This notion that we will spend £10m on a new goalie and then be like “Doh! Now we can’t afford Partey” seem to be a little lacking in trust of basic common sense. Arteta has a plan and the club clearly want to make that a reality. I don’t think that they would… Read more »

If we sign Runner son of Runner and then sign Raya, it’s hardly a vote of confidence in the former is it. Similarly it is a bit of a punch in the teeth of the youth GKs too that might see an open #3 position as motivation and give them belief that cracking the Arsenal team is within reach.

Sign them all – great!! Maybe there is a RAYA hope in getting AOUAR PARTEY started. But back in reality, I’m not convinced we have the funds for that. Anyway, time will tell.

Although we seem to worry about our club’s finances as much as our own these days, none of us really know how much there is to spend. We know what the club tell us but this could easily be a ploy to drive down transfer prices. Remember what Barca had to pay Liverpool for Coutinho when they knew Barca had £200m in the bank. We’ve already bought Gabriel so there must be surplus cash to spend. As regards Runarsson, he could immediately go out on loan and for £1.5m, he’s an absolute bargain and has the potential to make us… Read more »

A toast to the health of Bernd Leno!

I’ll drink to that!

Looking at our rivals 2nd goalkeepers, there is a fairly underwhelming amount of talent on display.

Any of these clubs would be in the shit if their main man got injured.

I mean is that really a bad bunch of Goalies? I’d take any of them as a number two TBH (without the associated costs of course). They’re all decent enough as a backup. Martinez was better than the lot, but I’m definitely on the side of the argument that we had to sell one of Leno or Martinez (just preferred Emi – although it is a good amount of cash we got for Emi so I’m ok) because I feel our priority is DEFINITELY a midfield upgrade over the luxury of having two outstanding goalies. While I’m not particularly convinced… Read more »

I’d only really take Henderson out of that lot, the rest are pretty poor.

Think you would have to say son of Hender was fairly decent last year. albeit that will be why he will agitate on the bench though

This is a strange one. If the stories about Raya are true it suggests we may not be as skint as we thought, or else we really want him for some reason.

Just because we need a very good second goalie.

That could be it

We could get Raya by making payments over the term of the contract, pay more over the term but less up front money. If he’s as good as they say with his feet, this might be our #1 keeper in 3 years time.

We must have known Emi was leaving for a while, I don’t know why we didn’t sign Joe hart, experienced and keeps our home grown players in check. Alternatively I’d go for Romero from United. Decent keeper, now 3rd choice there which he won’t be happy with. Sure they’d be happy to get him off the wage bill. This guy seems a bit if a strange one, if Leno is injured the defence will be under more pressure than usual.

We need a good back up to Bernd.

I feel injuries to goalkeepers are pretty rare. Even for us Leno’s injury was probably one that was comparatively long term in the last 7-8 years. Weird decision to spend money on 2 goalkeepers in the same window

Fabianski is 35 and his contract with West Ham expires in 2021. Just saying.

not opposed. Hammers got so much other work still to do though right?

It looks like he is intended as a third choice as his record at Dijon is poor, having conceded 67 goals from 31 appearances. He has been playing in a struggling team, but it does not bode particularly well if Leno gets injured. Raya may be targeted for 2nd choice.

Raya at 10 mil doesn’t make much sense to me. Neither does bringing in a veteran free agent on a super high wage. The Runner will be inexpensive, wages won’t break the bank and is still a sellable asset down the road. I’m fine with this.

Inexpensive but is he any good? 67 goals conceded in 31 games is form which could prove very costly to Arsenal in the long run.

Our goalkeeping coach (who probably gave some advice on the Leno v Martinez ‘question’) has worked with this guy and has gone on to recommend we buy him. He obviously has seen enough of his talent and mentality to think its a good fit for us.
The ‘but he conceded this many goals’ statistic is meaningless unless we have the detail behind how many of those goals were a result of his mistakes/errors.
I’d trust the goalkeeping coach’s opinion over a ‘keyboard warrior’ any day of the week.

He got dropped from a poor team. The clue is there.

From what I’ve read, Runarrson doesn’t look that good, but we’ll see. Raya still appears to be in Arteta’s sights though and one paper was reporting earlier that a firm offer from Arsenal has just been rejected. Who knows?

If we go scandinavian, I know a good keeper for Arsenal. Andre Hansen from Rosenborg. Very good shot stopper and 1vs 1,very vocal and a smart guy too ( educated lawyer). Was ranked as best keeper in EL group stages in 18 or 19.

Am I the only one who doesn’t like this guy? Not so good stats and the stupid comments about arsene. Surely we can find better talent at a similar price?