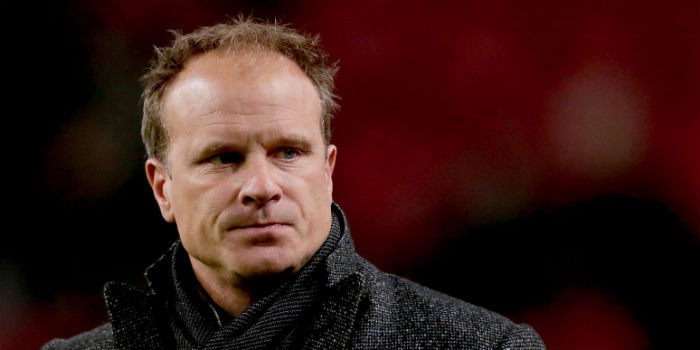 Earlier this summer, Dennis Bergkamp was fleetingly linked with a coaching role at Arsenal.

We’ve no idea if Mikel Arteta actually approached the Dutchman or not – we’re guessing probably not given the profile of the coaches he ended up recruiting – but, in the aftermath of Freddie Ljungberg’s decision to leave London Colney, there was a frisson of excitement at the prospect of bringing another club legend back into the fold.

It’s coming up to three years since Bergkamp was sacked by Marc Overmars and Edwin van der Sar due to ‘a difference of opinion about the technical policy to be implemented’ at Ajax and he’s been patiently keeping an eye out for a suitable position that fits the lifestyle he wants and the qualities he believes he can bring to the training ground.

He roughly outlined what he’s after in May 2019, but he’s recently gone into further detail in a fascinating interview with the BBC.

While explaining he’s not ‘actively’ looking for a job and that head coach positions are not of interest, he has reaffirmed a desire to work with younger players as they look to break into senior football. It actually doesn’t sound too dissimilar to the position Freddie fulfilled under Unai Emery.

Here are a few snippets that caught our eye.

On if he’s looking for work…

I’ve not worked full-time since leaving Ajax in 2017 and I am not actively looking for a job in football at the moment. But, more and more, I am thinking about getting back on the training pitch again, because that is what I love the most. Whatever I do next, though, I don’t want to be a head coach. It’s not my ambition and I like my freedom too much. I like to spend time with my family and have a life outside football, and I don’t think you can be a fully committed manager if you want to play golf sometimes as well.

What I have in mind is a role that worked for me at Ajax, which was a lot like the one I had as a player – a little bit in between the lines. I wasn’t really a striker or a midfielder, but in between. That’s how I see myself as a coach as well. I like to be involved with the first team but I think my power, my strength, is to bring players from the youth to the first team. Sometimes the youth team and first team can be like two islands. What I am talking about doing is like a bridging role between them, but I realise I’d have to have results as well. I wouldn’t be working for the sake of it; just to go to work and come home again. I’d like a challenge and to be really responsible for developing players and bringing them through.

His take on the developing role of data…

One of the biggest things to have changed is the use of statistics and how they are interpreted to show if a player is good or not. Again, it’s an area where things are evolving all the time. When I played, the stats were basic and I didn’t pay much attention to them for a long time. I had a discussion with Arsene once about them, and he said to me, because I was in my 30s: ‘I can see from your stats that your level is dropping after 60 or 70 minutes, that’s why I take you off most of the time.’ I said: ‘OK, boss, but your statistics don’t show that even at 80% I can make the important pass before the goal.’ I always called it the pre-assist – the moment that splits the defence and leads to a goal, even if it isn’t the final pass.

Stats are another window into the game, but it is not the only way. I still think your eyes make the definite decision on certain things, and then the stats can help you – maybe to prove that you see it right. One day, perhaps, all the stats you need will be there, but for now I know which players I love watching.

It’s always interesting reading Dennis open up on the game, so we fully endorse you taking 10 minutes out of your day to read the full BBC transcript. You can find it here.

Great man! Great interview! Great article! You’ll be forever in my heart Dennis as you’re the main reason I became a gooner 🙂

Read this last night and was impressed with the whole article. I believe him when he said he didn’t need coaching and just basically did his own thing on the pitch.

The greatest Premier League player ever.

I think Thierry Henry was much better. Some people over rate Dennis. I think Henry was the best ever player to play in the premier league comfortably.

Different players, both incredible. You can’t ‘overate’ Bergkamp as he was peerless.

Can we get him if we can’t get Aouar?

Between the lines, he wants Partey not head coach.

Whoever. At this point even a block of Vibranium-coloured, adamantium-flavoured molten cheese would make our midfield better. It would be strong and move about.

The greatest player ever to don an Arsenal shirt. Love the man!

So good, you couldn’t get his name right.

My favourite player ever! So far ahead of his time and a footballing brain like no ever. Would Love him back at Arsenal

How can someone vote this statement down???

Read this last night and was impressed with the whole article. I believe him when he said he didn’t need coaching and just basically did his own thing on the pitch.

The greatest Premier League player ever.

Oh Dennis, thank you so so much for bringing me to Arsenal. If that wasn’t you, I would definitely join the Manchester United brigade something like more than 20 years ago, just like my whole generation in Vietnam.
Always love you!

Rob Holding did a good impression of him recently. Got the hair spot on ?

Dennis Bergkamp is the perfect example of the stats not proving the facts. He is, IMO, the best player I have ever seen. I feel lucky to have seen him, and even in his latter years, he could produce magic. He may not have the numbers of Henry or Ronaldo, but none of them ever made actually speechless, unlike Bergkamp

DB10, the reason I’m an Arsenal fan. What a player and off the charts football IQ. Read his autobiography “Stillness and Speed” if you haven’t already for more on what made him so great.

People like Bergkamp are too valuable to mot be involved in the game somewhere. Too much knowledge and brilliance going to waste. I loved him as a player, my favourite just in front of Pires…

Always my first signing in FM.
And always in my heart, Denniboy.

Thank you for masterminding the 1997 comeback against ManU! It captured my heart to become an Arsenal fan forever.

Put your boots on, Dennis.

Our midfield is utter shite and Kroenke has banned Ozil from playing.