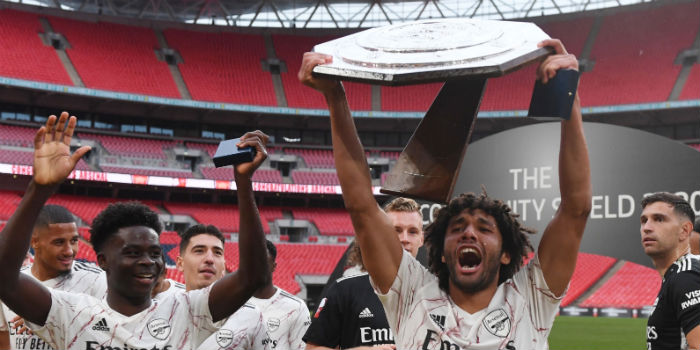 That Mohamed Elneny is still an Arsenal player probably comes as a surprise to many.

That the Egyptian international was so good in the Community Shield against Liverpool, arguably even more so.

It remains to be seen whether Mikel Arteta wants to keep the 27-year-old for the season but one place he definitely won’t be going is Besiktas, the club who had him on loan last season.

Such were the Turkish giant’s financial struggles at points last season, it was reported that our man had to fight to get his wages paid at times. Perhaps unsurprisingly, it was Arsenal’s asking price that ended up scuppering a permanent move even though Elneny became a lynchpin of the side.

“Elneny was the player we wished that he wouldn’t go, but his cost was too high,” manager Sergen Yalcin explained this week.

“He played in the starting line-up in the Arsenal vs Liverpool match. He has a high cost but is a quality football player. For us Besiktas, we have to adjust our budget and balance the budget given by TFF [the Turkish Football Federation].”

There haven’t been too many clubs linked with Elneny since he was playing in Istanbul. He signed a new contract at the Emirates in March 2018 and is under the contract until the summer of 2022.

Elneny: Arteta has told me he needs me on the team

I have no issues keeping him. Never thought he was as bad as everyone made him out when he was here, and seemed stronger and more forward aggressive in the Shield match than in the past.

Agreed, I think Arteta can make him better as well. Seems the type character that will do exactly what he is asked to do by the manager and give 100%

And he doesn’t look like the type to whine if he’s riding the pine.

Agree, we should keep him. Good squad player to have. I also think this would open the door for Wilock to go on loan for 6 months or a year just to get some more experience.

No worse than Xhaka.

Such a solid prem player, would be perfect for a mid team like Brighton, Wolves or looking even lower, Sp*rs. Are you telling me John Obi Mikel was better than him? Off with you.

I hate to state the bleeding obvious but right now we are a mid table team!

Keep him for rotation as a reliable outlet, awesome. Sell him for around 10 million, awesome.
Either way, we win tbh.

well, no. we need an upgrade/competition at CM. He’s clearly no competition for ceballos nor xhaka. Must sell so we can upgrade in this department.

Elneny is a good consistent unspectacular squad player. It isn’t bad for us to have squad players. The problem, however, is that we simply have too many of them and not enough quality starters especially in midfield.

Its a punt to keep him – will we see the more aggressive, pass forward version of the last game, or the pass backwards, negative player of the past few years?

Could be an Arteta turnaround type. Or another example of player not at true Arsenal level.

I think it’s pretty clear that he is a player who understands and attempts to carry out his manager’s instructions. He will play more aggressively (and, as an inevitable price, make more mistakes) if that is what he is supposed to do. He had several matches like this before he left, and he was pretty good. Absolutely good enough to remain in the squad.

He was always more positive than given credit for, whenever I’ve seen him. He’s almost like a poor man’s Partey in that he looks, on first glance, like a technically limited DM type, but he actually has a really good eye for a pass. I’d like to keep him, given how little financial benefit there is in selling.

Another player to benefit from the Arteta revolution.

If he continues to perform like he did in the Community Shield, then I for one have no problem whatsoever with him remaining on the books – a useful experienced squad player, who could yet play a part in this season’s schedule.

Always talking and with so little to back up their words

I was hoping one of the promoted teams would go for him.

I think Newcastle would be perfect for him. But happy to keep him around, like people are saying he is a good solid player who I never hear complaining. If the money isn’t out there for him then keep him. He can take Torreira’s squad place

Not surprising really, but the question remains: just who are we going to be able to sell (not want to sell, not the same thing at all) to balance the books and provide Arteta with funds to bring in further new players? Fans have their favourites and there are plenty of comments about why “A”, “B” or “C” shouldn’t be sold but there are far, far, fewer that come up with names for players we can actually sell for “reasonable” money in a fragile market. Flogging someone for a few £million won’t cover half of Willian’s reported basic wage for… Read more »

Injuries permitting the other list is Chambers, Sokratis, Mustafi, Kolasinac, Ozil, and Guendouzi.

Ah. Let’s look at those. I don’t think Chambers will raise a lot, assuming we can sell him – is anyone really interested? Sokratis is nearing the end of his contract and he’s over 30, so a low fee there (see Willian reference in earlier comments). Mustafi, well who knows what we’d get for him? He cost £35 million (in the good old days when we (over) spent money like water) – say, 10% of that at best? Kolasinac – last I read, he was hoping to go out on loan so little financial uplift there, other than his wages… Read more »

I hate to break this to you mate, but we’re not! Face facts. No one wants out dross (Mustafi, Kolasinac, Sokratis) No one wants to pay market forces money for our better players (Bellerin, AMN, Lacazette) When it comes to spending on anyone but himself or his family, Stan Kroenke probably doesn’t even tip kids that knock on his door on October 31st for Trick or Treat. We are in a stalemate. But all is not lost, if we hold on to all (and I mean ALL) of our top players and allow Arteta to bestow his unique brand of… Read more »

Keep him, loan out Willock instead. Willock can get valuable game time, Elneny can help us win the Europa league.

Alex Davis
Reply to  The spoon

A newly promoted team or a loan abroad would do wonders for willock. Preferably playing in his best position which is as a 8. Even to a championship team pushing for promotion would do him well.

GoonerBot
Reply to  The spoon

I know this is an unpopular opinion, but I really don’t think Willock is as good as we think he is or will be. He is at an age where he should really start to come of age eg (Wilshere, Saka, Martinelli, Torreira…bloody hell even Guendouzi). I have seen enough of him to form my opinion, and I dont think any amount of ‘valuable game time’ will improve him…

But hey, look at Martinez now…….so I genuinely hope he proves me wrong

It’s a marathon not a sprint

the season is long, our midfield is thin, and elneny is a reliable, if unspectacular, player.
he’ll be fine in the europa league and cup competitions, and may even provide some guidance and leadership to the younger players we have coming through.

Not being able to pay him regularly during the year might have been a bit of a clue…..

For the peanuts we would get selling or loaning him we should rather keep him. He’s a tidy player and we’ll need that through the season. Granit can’t play all the games, it’s impossible, so to keep a player like Mo would be sensible, he can cover in cup games, loves playing for the club, never complains and is always reliable.

If we keep Elneny, Guendouzi and Torreira (CDMs), I think we have enough cover and variety for a Thomas Partey type player. Pairing any of these with Xhaka or Ceballos should work, provided Arteta is able to find the right partnerships. This would then allow us to pursue Aouar much more aggressively and make him priority over Thomas Partey. We have enough ‘disrupters’ and box-to-box midfielders. This provides a good platform for more attacking midfielders like Aouar, Coutinho or Ozil (if Arteta can get him going). Given Arteta seems to get the team to defend as a ‘unit’ I think… Read more »

With the way things are going, it would be absolutely unsurprising if we can’t sign either Aouar or Partey. Those we would consider selling are too costly (Sokratis/Torreira/Kolasinac). Those we would like to sell, nobody wants (Guendouzi) or don’t want to leave (Ozil). Those we can’t or won’t sell are eyed by all the big-money thugs who want to price Arsenal out of a deal (Bellerin). Everyone knows we want to buy, and we don’t have money, and that we may sell to finance purchases. Blog’s post the other day, about nobody leaving, may not be so hypothetical after all.… Read more »

He looks more confident after his stint in Turkey. Arteta used to play with him at Arsenal so in Mikel we trust. He will know what Mo is capable of.

We can’t move on poorer assets bc they are on high wages. We try to move on better assets for low price. We don’t seem to be good at selling. And that has direct co-relation to buying/what we can afford. I feel we need to stick to our guns (not panic) 1)Peripherals need to be sold for 40m. Torreira’s deal with Fiorentina seems stalled. Torino were also interested. 22m the target(in installments fine). And then Kolasinac (proviso we don’t do anything stupid and sell Bellerin) for 12m to Italy (Roma?) Get those across the line will be 6m short which… Read more »

How we are not moving Elneny on is beyond me. Holding also fetching low price considering 24/25yrs and quality enough. Sokratis we are letting go for virtually free. Torreira we cannot close the deal on an 8m sale (structured to 22m) Bellerin we are trying to hawk of for 25m with potential consequence to backline already full of new faces Macey we want to sell bc we want to keep Martinez for some inextricable reason when we have Leno and also Iliev to challenge on Macey. Laca we hawk off before we confirm on Auba and now the French man… Read more »

I think Edu and company have not been good at judging and assessing other side and what they really want. He doesn’t have enough of a nose on the ground maybe or just lack of experience reading the other side or maybe lack of sufficient market awareness in terms of dynamics. Timing is key. BUT also realistic pricing. Some players we should simply move on others we can afford to hold for higher price. One we should just clear is Elneny. Ones which we should be able to fetch higher should be Sokratis, Holding. Kolasinac and Torreira are OK as… Read more »

I think they’ll turn their attentions to Messi now instead.

Thanks for giving me a laugh.