Arseblog News – the Arsenal news site
Home Players Men Ceballos: I had other options but I told Arteta I wanted to... 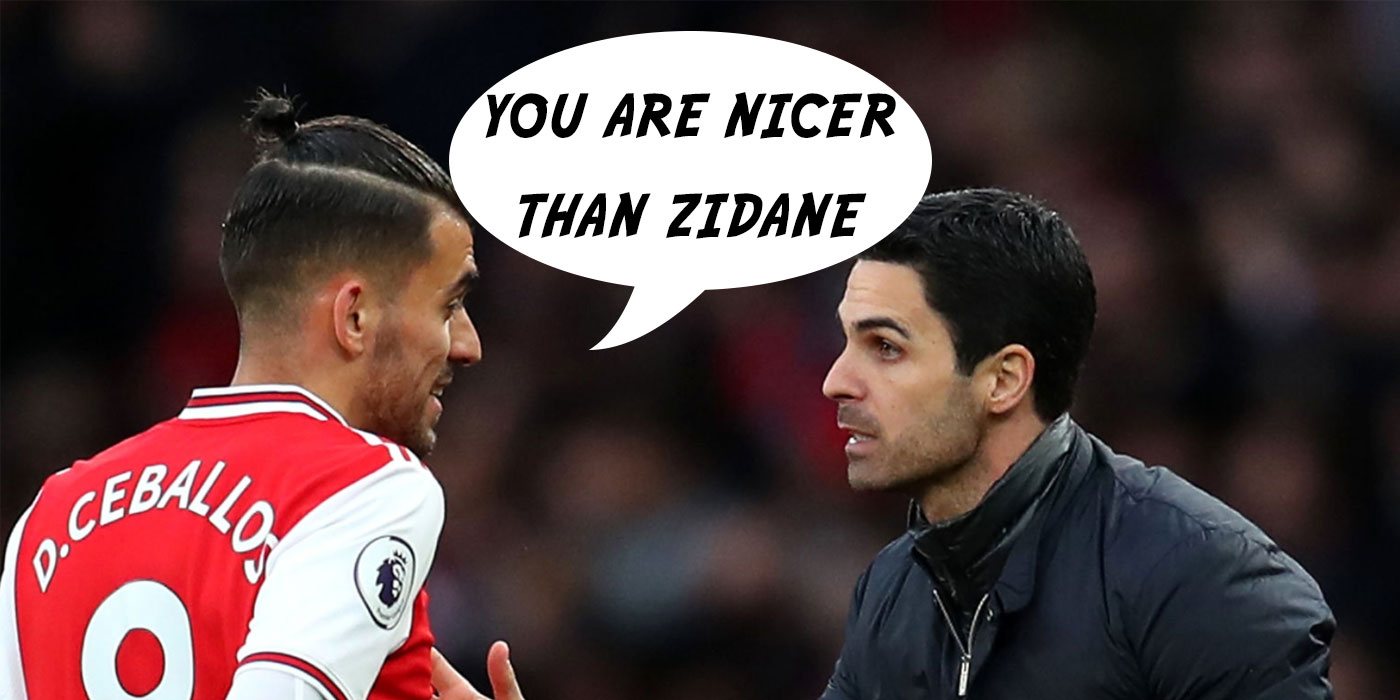 Dani Ceballos officially returned to Arsenal last night, signing a contract which will see him spend his second season on loan with us from Real Madrid.

The 24 year old had to make a decision about what do this season – particularly with Euro ‘2020’ taking place next summer – but he was in no doubt as to what he wanted.

“It’s true that I had other options, such as staying at Real Madrid and going back to the Spanish league, where there were teams interested in me,” he told Arsenal Digital.

“I spoke to the coach last year, before the final, and told him that I wanted to stay at Arsenal and win titles.

“I’d been really happy with what Mikel had built at the club since he came in. I had a great time at this club last season and there was never any doubt in my mind that I wanted to come back.”

He also thanked the fans with whom he made a strong connection last season. He caught the eye with his stand-out performance against Burnley in our opening home game of the last campaign, and despite some difficulties inbetween, finished strongly under Mikel Arteta once football got underway again after the lockdown.

“I think everyone will have seen last season that from the moment I joined, I bought into the club completely and always gave 100 per cent both on and off the pitch,” he said.

“The fans repaid me for that by showing me a lot of love. When I was at home they were sending me messages asking me to come back and saying that they needed me here.

“I think they’ll be as happy as I am that I’m back and I’m sure we have a great year ahead of us this season.”

Welcome back Dani, and hopefully he can pick up where he left off at the end of last season.

One of our best players post-lockdown. Would love him to repeat his form. Reminds me a tad of Aaron Ramsey without the goals.

I don’t think he’s quite the knack for getting in amongst the goals as Rambo did but I really hope we see more end product from him. But that relies on him having a midfield partner that gives him licence to do less defensive work and take more risks going forward….

Pepe The Frog
Reply to  goonero

Agree with you. To be fair, Dani’s got good vision. And his attacking output, while not great, is generally good. It’s just that we played in a more defensive set-up after the Brighton game.

Nah… Ramsey is just a decent player. He scored many goals in 1 season but that is a fluke. So when he din score enough goals for most of the seasons is the action reflection of his ability. Ramsey is overrated

He is in fact more a cazorla-style player, with his ability to carry the ball out of tight positions and regularly make what wenger termed as the ‘medium-value’ pass into forward positions. Such a playing styling doesn’t shine on the stats sheet with a lot of goals and assists.
It can be even more productive if players further forward then him who receive his passes can get more creative in terms of creating goal scoring chances. Willian should help in this regard. Pepe can probably up his game too.

Cazorla got 26G/A in his first season – not sure it’s fair to say he “doesn’t show on the stats sheet”!

Didn’t Cazorla play on the wings to start with?

Sadly Aaron couldn’t relied upon for even a few months at a time and you only remember 13/14 where he reached his full potential.

that was a fluke

Were his 2 FA Cup winners both flukes? Class act with injury curse but no fluke artist.

I’ve always felt theres something of Busquets about his technique – the way his feet are open. Not that he’s similar positionally, just technically. Hes not so mobile or incisive as some of the top attacking midfielders, but he’s good at manouevring the ball, shielding it and maintaining possession deeper in the pitch. From what I know he’s previously been thought of as an attacking midfielder, so I’m hoping that as he plays more in the deeper role he’ll progress even further than what we saw last season, because I think it’s something he’s suited to. Really happy to have… Read more »

Coupled with his technical ability and confidence in keeping the ball that you describe, I think he also has good vision and understanding, especially for what is still a young player. So, a bit more creativity in creating chances is certainly likely. I don’t think he will ever become the kind of bursting-in-late-and-scoring attacker that we associate with Ramsey.

I suspect he’ll get one or two more this year. He does have a fierce shot but he rarely attempts one. I remember a handful that came close after he just blasted it. Wouldn’t mind him or Xhaka having a pop or two a game.

Great news, welcome back Dani,his hair matching perfectly with Mikel rather than Zidane

That’s why Zidane got rid of him, he is insanely jealous of Dani’s mop.

“I spoke to the manager last year before the final”

Oh, you spoke to Arteta a month ago??

Very happy he joined btw. He fills an important role in our midfield system.

I think he is santi without the left foot!.

So kind of a skillful tricky hopper

Good to see him back. If he continues to improve with MA I could see Dani being one of the best CMs in the PL this season.
Now to find him a midfield partner.

Still no article or mention of Nketiah’s 10 minute hat-trick, 14 hours after the fact?!

He has the “Santi-ness” about him at CM, but doesn’t strike me as someone with goals/assists apart from set-pieces at the moment. If he develops that over the course of the season, then we have a player of immense quality in our hands.

Glad to have him back with us! His ceiling is high and I believe Arteta is the perfect manager for him to work with to become even better.

That’s good to know. No firm information, as far as I know, about options when the new loan expires. Watch this space.

Should continue to be a very solid regular first team player at the base of our midfield taking the ball from the defence and cycling it to more advanced positions. The question is how high is his ceiling and if he can reach Santi level elite quality

I started to really like Dani as the time went last season, so glad that he stays. And he seems to work very well with Arteta.

True. Many players seem to get along with Arteta and he brings out the best in several of them – I guess he’s “that kind of guy”. Lucky us!

I don’t think Arteta is that great with man management. He has not been able to get the best out of Guendouzi, Torreira or Sokratis all better players. He is OK. Certain players took on his instructions (Tactically he is good) and they got something out of it. And they can see if they went somewhere-else at the moment, they may not have as good an opportunity as with us bc we are light in some positions and need the help. Lets be real and not wet behind the ears with these things.Taking nothing away from Arteta’s better qualities, he… Read more »

You bring up 3 players who don’t fit Mikel’s system in comparison. Soka doesn’t have strong on the ball skills needed to play out of the back. Lucas got injured and we didn’t really get to see what he could do with Mikel. The dream of Guen’s ability and play is much larger than the reality. Truth is, he is limited and hasn’t shown significant improvement from the day he arrived. His output of 0 goals, 1 assist and a winning % of 43% in 56 matches is poor. I have to admit I’ve never rated Dani highly. Full credit… Read more »

You gotta love those players that want to be at Arsenal.

They would take a better option if available.

With Dani and Auba (announce already!) with us next season, and willian plus our new defenders, we are now definitely better than we were last season. Bring in a midfielder or two, and we will be a good shout for top 4.

I don’t see an Auba annoucement. Likely he will wait to see if he has any feature in plans with Koeman at Barca. PSG being the other potential but unlikely if they have Neymar and Mbappe.

You don’t think he’s not playing a game as well?

not bad at all for 50k/week

Loans definitely an option for us bc we don’t have the money to be buying two more unicorn options. We have already commited 25m to Magalhaes. Another 20m goes to Pepe and Saliba. Prob another 10m to Mari and Soares contracts plus Ceballos loan and the (IMO) unecessary and poor business Willian. That’s 50-55m already. I don’t think we can raise more than 110m, certainly 118m is the aim. We may sell one of Auba or Laca depending on interest and who will be moved for most money. Auba certainly can attract better money at 40m mark, Laca prob slightly… Read more »

If you find a manager that believes in you and gives you the opportunity, its better than being in a bigger club and being benched. Arteta has improved BOTH Ceballos AND Granit. This is where many tend to be disingenuous recognising one but not the other. The functionality of the deep lying duo contributed to a slight up tick in form and overall improvement as Arteta was able to eek out the best in both players. Bearing that in mind, rather than risking a complete new chapter and potential hurdles at Betis, it makes sense for ceballos to return to… Read more »

This has loose parallel to how we lost Gnabry in some sense albeit RM is smart and have him on loan. We foolishly did not push for Gnabry in first team (One of the few times Wenger did not act correctly on instinct) or did not force the issue at that time with the Ox to put pen to paper or promote the young and very hungry German. He then got sold (for nothing) went off on loan for a season and then to Bayern to great success…and we lost Ox as well thereafter. With RM they have ceballos on… Read more »

You seem to think Guen is the following things: A – Wanting to be coached. He has proven he is not. B – Talented – His hope and dream is much larger than his reality. I do hope we move on quickly from a player who, in 56 league starts has produced 0 goals, 1 assist and a 43% win rate. It is quite telling that we are offering him around and not a single upper tier club wants him. The problem with Guen is his inability to grow as a person and player. To put those shortcomings on Mikel… Read more »