It took a while for the official announcement but Arsenal have made Gabriel Magalhães the newest member of the Arsenal squad.

Before we get into the stats, I do want to comment that the PR content team did a great job to figure out a way to make a fun announcement, especially considering that the player is still quarantining.

I also want note that statistics for defenders is something that should be taken with a grain of salt. Defending statistics are heavily influenced by the style of play and tactics of the team. More importantly, it is trying to stop something from happening, and doing that successfully doesn’t always produce an action that has a statistic recorded for it, and actually recording an event could be because of a mistake allowing for that opportunity. 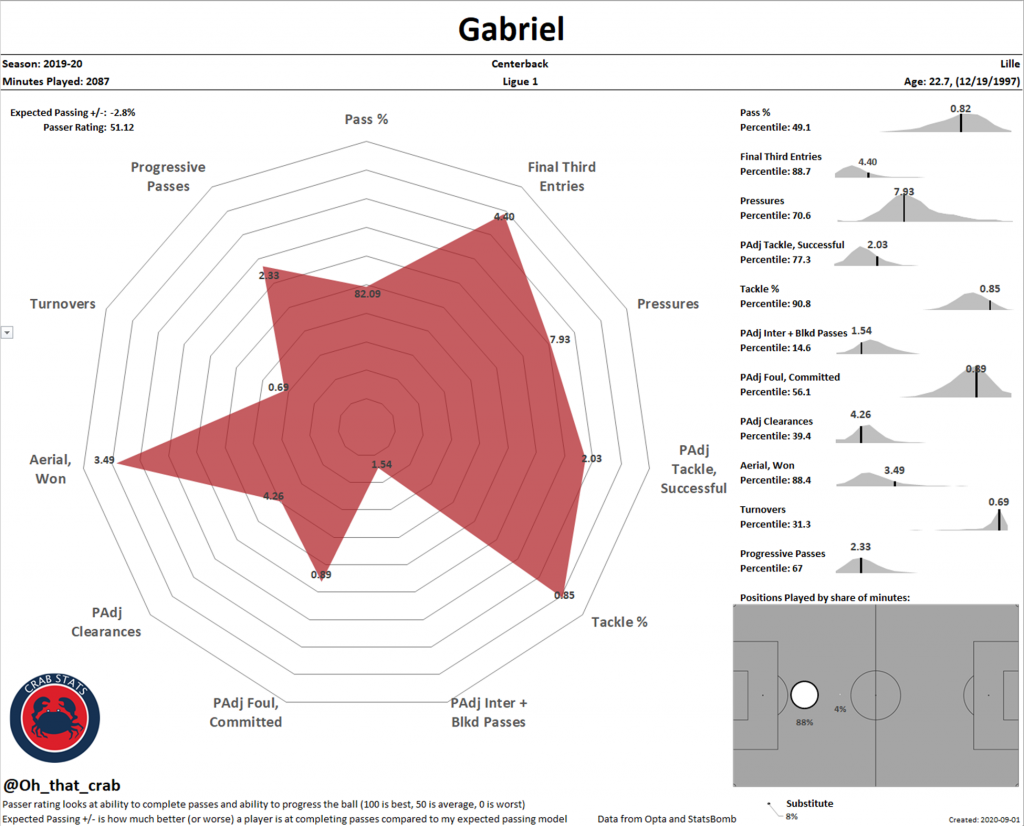 Gabriel Magalhães: By the numbers

Again defending stats are far from perfect and these will be not adjusted for possession.

I think that the statistics above are pretty interesting. For the most part, it shows a player that is slightly above average at defensive actions. Lille as a team are actually among the lowest at total defensive actions (20th in tackles attempted, 17th in interceptions, 5th in fouls, and 6th in possession in Ligue 1).

At 6’2″ it also isn’t surprising that he is good in the air and that is something that should be helpful in the Premier League. I also like that when he does attempt tackles, his team comes away with the ball at a high rate while also not picking up many fouls.

These are the statistics that make me excited about Gabriel.

He looks to be an above-average passing center back. His pass completion rate could use some improvement, but the lower rate seems to be affected by his propensity to try to advance the ball.

He has areas to strengthen in his passing, most noticeably is that he is one of the most one-footed players, even among center backs who aren’t that often tasked with passing with their weaker foot. He uses his left foot 88% of the time, making him the 15th most one-footed player among center backs. This could partially be explained that he for the most part did not face a lot of pressure, with just 12% of his pass attempts coming under pressure in Ligue 1 last season.

I think that overall this kind of ball progression profile is exactly what Mikel Arteta wants from his deep players. He looks like a player that will fill the role that David Luiz has held on the left side of the center backs.

I will be completely honest and say upfront that I have not watched him play any full matches. A lot of this is down to BeIn sports carrying Ligue 1 and the channel not having a wide carriage him in the US. From the scouting reports I have read (this is a good one and I think Mark is one of the go-to people for scouting on defenders)  and the stats I have seen above makes me optimistic about this signing.

I think the fact that Arsenal have Luiz in front of him will be a positive, as he shouldn’t have to be thrown into the fire early in his time with Arsenal. I think he fits the profile for Arsenal to be a ball dominate possession team, adding good ball progression from deeper positions. William Saliba has a similar profile, giving Arsenal two very good ball-playing center backs for the future.

It is exciting to see the potential for a long term settled center back partnership at the club.

Sources: Opta via Whoscored and my own database, StatsBomb via FBRef

Welcome to The Arsenal GM6! Hope you turn out to be world class alongside Saliba. Scott, great job with the numbers as usual. Would be interesting to see the effects of a solid backline! COYG

I have seen him play and believe me arsenal are in for a reality check. he’s a good player with good potential if coached properly that is why I think he may turn out just fine. BUT he is very raw, he is also not as comfortable in possession as some of our other defenders. for a Brazilian he is not very technical. if I had to say it this way he is not a real ball playing center back, his ground pass from the back is not very accurate and sometimes weak because most mod the time when he’s… Read more »

Makes you wonder whether or not numbers really mean anything.

Good job we haven’t sacked our whole scouting operation in favour of a big old computer programme. You’d have to be really…

I particularly liked the number 29, which happens to be the number of thumbs down you have at the time of writing.

Scott makes a very good point about judging defensive numbers. We will see how he works in our set up in due time, but the above stats suggest he has a decent chance of doing well for us.

So now we have gabigol and gabinogol!

Jeez, I hope they aren’t like matter and anti matter and just annihilate each other upon contact.

Often I just comment “LOL” but this time I actually physically laughed.

Our VVD… for many years to come!

This is the kind of ridiculous hype that all but ensures a young player will disappoint. Let’s just hope he develops well and becomes a quality starting Premier League centre back, for now!

I am really excited about the future with Arteta. I wish the Board had given him the reins immediately after the great Arsene.
The way he is going, we will certainly give the present Top 4 a huge fight.
If we bring in any of the touted players in the middle, I’ll tip us to break into the Top 4.

Would be interested to see these numbers but for under-23 defenders. I suspect his numbers would really jump out and explain why he was so sought after. He looks prodigious in some areas and has room for development in others, but at 22 he looks well ahead of the curve.

Don’t be mean. He is above average. I hope his distribution is normal too.

thanks for sharing these numbers. i think that you should state the total number of cb’s that make the cut to the ranking, because being ranked 132 ain’t the same if there are only 140 cbs or 300. maybe you could just use percentiles as you do for the 3 seasons’ span. it’d also be useful if you gave some insight on why you chose to take into account the past 3 seasons and not the last 4 or the last 2. in the 2017-18 season gabriel was 19 i believe, and was loaned to two different clubs that season.… Read more »

Between those stats, the scouting report (which I thought was excellent), and my own experience watching Lille, I think there’s reason to temper expectations. He’s 22, and clearly not anywhere near a top Premier League CB yet. The fans will want a Gabriel-Saliba partnership ASAP but Mikel probably won’t, and probably shouldn’t, rush them into the first team.

Hopefully we now have a young defensive core of the future, though.