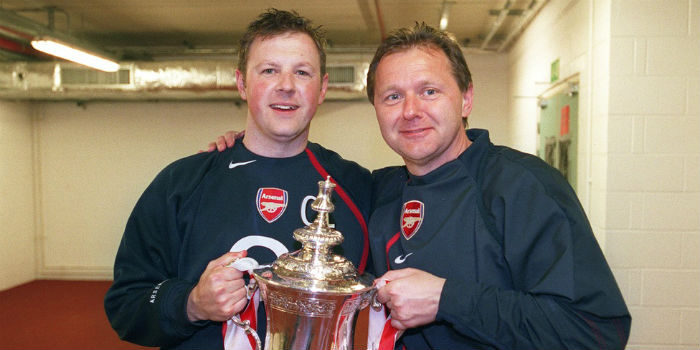 What was the ‘red zone’? What really happens in a pre-transfer medical? How does it feel taking pelters from press and fans when injuries stack up?

Over the course of 32 years at Arsenal, Gary and Colin Lewin, who headed up the club’s medical team from 1986 to 2018, rarely said a word about the challenges they faced on a day-to-day basis. With at least one of them in the dugout alongside Arsene Wenger throughout the Frenchman’s tenure, they were the definition of ‘seen but not heard’.

Even with the advent of social media and the explosion of interest in every facet of footballers’ lives, they kept their counsel. It turns out, they had to.

Bound by patient confidentiality, they weren’t in a position to speak candidly about Kim Kallstrom’s back, Abou Diaby’s ankles or any of the other myriad injuries that took on near-mythical status during their spell at Highbury and the Emirates.

When the day job handed me an opportunity to chat with the duo on behalf of Proximie, I jumped at the chance.

The brief was to get a clearer picture of how their profession has developed across three decades, which, unfortunately for you, meant a level of professionalism that necessitated I didn’t ask Gary about how bittersweet it was saving John Terry’s life on the pitch in Cardiff in 2007.

Anyway, during the course of our chat, we touched on a few snippets – cut from the original interview – that I thought might be of interest to an Arsenal audience.

On Arsene’s use of the term ‘red zone’…

Colin: It’s not quite a myth but it was certainly something that was more subjective and not entirely objective. All the data in the world is helpful but sometimes you have to ask a player how he’s feeling. You can have the greatest data in the world pointing to everything being fine but if a player says, “I’m exhausted, I can’t play tonight” that has to carry a fair bit of weight. That ‘red zone’ wasn’t always defined with objective data. There were algorithms in the background based on certain parameters that gave us an idea of when someone was drifting away from their best but that tag of ‘red zone’ was always a bit too simplistic. In every decade of football, players have claimed fatigue or tiredness, call it the ‘red zone’ if you like, call it knackered.

Gary: We all work, if last night we only got three hours of sleep, we’re going to come in knackered today. If a footballer has a problem with that kind of sleep problem at home for non-footballing reasons, they are going to be tired. That means they might be in their ‘red zone’ when they are training. That doesn’t mean they can’t train, that doesn’t mean they can’t perform to the highest level. It does mean they might need a bit of extra recovery time afterwards. Just because they are in a ‘red zone’ doesn’t mean they can’t perform, it all comes into the context of the information that you are building around a player of what is normal for them. Every player is different.

On the reporting of injury records…

Gary: I was at The FA for many years and we tried to get an FA injury audit, in conjunction with the Premier League, off the ground. I think it was 2011/12 and unfortunately, the Premier League decided to go with Uefa and it has fizzled out now. Until you get that baseline of injury data that is mandatory – not optional – from the Premier League, you’re not comparing apples with apples. For example, in the post-lockdown period, if somebody says there were a lot more injuries in the final games of the season, my reply would be, how do you know? Their answer will be, I read what was in the papers. You should never make the assumption that the papers are reporting all injuries.

On the perception of medical teams…

Colin: People need to change their perception of what a medical is. A medical is not a “Are they fit? Aren’t they fit? Can you sign them? Can’t you sign them?”. A medical is a risk assessment. If you’ve got a player worth X amount of money spaced over a four or five-year contract it could cost the club £20 to £100 million. A medical is a risk assessment of what value the club will get out of that player. A player can sign with injuries but if you’re confident that that player will go on to play every game and you can manage their injuries, it’s a low risk.

Some clubs use a flag system; red, amber, green. A red would be a player you don’t think will play 10 to 15 games a year. An amber might be a player that plays 25 to 30 games a year. A green would represent someone who is likely to play every game. It’s not as black and white as it’s made out to be.

As for what happens in a medical. You’ll do cardiac screens, looking for any abnormalities that may increase the risk of cardiac issues which are obviously very important. If they fail that, it would be a red flag. Then you do joint assessments, muscle assessments, strength assessments, core assessments. You’re building up a database on that player on what the risk is to the club if you sign them. If you think of them as risk assessments rather than medicals you’ll get a better idea of why some clubs buy certain players. If you’re paying nothing for a player who is 21-years-old and has never had an injury, your risk assessment is very easy. If you’re signing a player who is 30-years-old on a four-year contract at £25 million a year, your risk assessment becomes more difficult.

To read my full Proximie interview with Gary and Colin Lewin, click here.

Very insightful! Especially that part on the medical.

I am surprised there isn’t a pre-bid medical, a bid-up medical on top of the final final medical.

They probably have to check everything down to the teeth.

Yes, the medical part was very insightful. I liked the last sentence, made me think Willian must have provided a hell of a risk assessment to get his contract!

This is interesting. ‘Red zone’ – I miss Arsene’s contribution towards the language of football.

Injury records are also down to how well players acknowledge and respect their duty of care to their fellow professionals when on the pitch. I haven’t forgotten the sheer violence dished out to our players – encouraged by certain managers and pundits, and ignored by officials – during Arsene’s reign.

Quite damning of how the club was run for them to say about injury records.

Oh, has the violence stopped?

Salibaba and the Forty Thieves
Reply to  Magneto

Maybe I’m in the minority but I never once thought Arsenal’s tragic injury record was due to our medical team. That’s like saying COVID infections are due to NHS staff.

I always thought it was a lack of protection from referees; perhaps a disadvantageous training regime and player discipline.

One of Arsenal’s nutritionists gave an interview saying that some players are very serious with their dietary intake whilst others are reluctant and would rather coast by instead.

Gary & Colin are legends in my eyes.Just reminded me of what happened to Eva at Chelsea. The grand manner Arsenal treated it’s employees…

Very interesting. The family were links to the likes of George Graham through to Wenger and then to Emery. Quite rightly they won’t talk about individual players, but under Wenger we retained several players who were obviously “crocked” for way too long. In the end, ironically, to no advantage for the players concerned or for the club. Those decisions weren’t down to either Lewin of course, but I don’t think that would happen today.