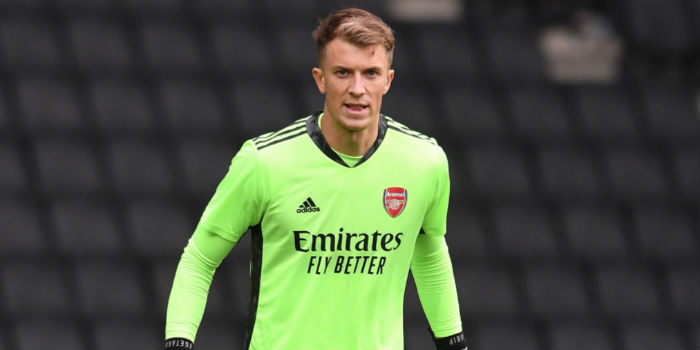 Matt Macey has confirmed that he and Arsenal are in agreement that he should play his football elsewhere this season, whether that be as part of a loan or permanent move.

The 26-year-old keeper has been at Arsenal for seven years since joining from Bristol Rovers and will be out of contract at the end of the season.

He has two first team appearances to his name, made in the League Cup and Europa League in 2017, and provided back-up to Emi Martinez at the tail-end of last season when Bernd Leno was injured.

In an interview with The Telegraph, the 6’7″ glove butler explained that he’s at a point in his career when he wants to play more regularly after a fruitful loan spell at Plymouth Argyle in 2018/19.

“For me it is all about playing regular football again,” he says.

“My focus is to go and find games wherever I can. The club are keen for me to go and play and be successful, wherever that may be and whether that is on a loan or a permanent deal.

“I am desperate to get back to that [Plymouth] environment again. It was a tough season but I got a lot out of it, personally.

“Being a massive part of the team and having that responsibility on my shoulders — that is the sort of challenge I want to face every morning when I wake up. Not having that in the last 12 months has been incredibly frustrating and I have had to find new ways to stay motivated.”

Macey and Arsenal have plenty of time to find him a new club before the transfer window closes in October. Presumably, if he’s talking in public now there could well be a few irons in the fire. Given he can walk away on a free in 12 months time, it makes sense to try and get a fee for him now before promoting one of the younger Academy keepers to third choice.

Mikel Arteta and Edu also still have to decide whether to keep hold of Emi Martinez or not.

The full interview with Macey is well worth a read. He’s obviously enjoyed his time at Arsenal and shares some interesting insight into training with world class players and Mikel Arteta’s impact. Read it here.

If the life of a second keeper can be challenging, can only imagine what it must be like for a third line keeper. And keepers are never subbed!

He’s been around for a while, and even picked up a FA Cup medal last year – so best of luck to him in the future!

Let’s get a few quid in the bank!

jumpers , coats, bags and bikes for goal posts ? arguments about “that was a post and in!” and “that was well over!” ? great days!

Those chancers who’d twat the ball twenty feet above the line then walk off pumping their fist like they’d scored a worldy.

Assumed he was going to step up to number 2 if and when emi goes. Not sure we have any gks in the academy ready for first team football.

Fair play to him for wanting to get out there and play and all the best kid.

Looks like Emi if off and if true key takeaway from this story is that Macy wasn’t going to be promoted to our No 2.

I sincerely hope that Arteta doesn’t make the same mistake as Wenger made when he sold who is now of the best keepers in the world. Martinez has proved clearly he’s our best keeper since Lehmann and a vast improvement on Leno.

Martinez has been great but ‘a vast improvement on Leno’ isnt fair on Leno. He was in pretty great form before injury and I think many of us were shitting it when he got injured.

Martinez is vastly superior in every way. Better at crosses where he doesn’t flap, more dominant in his area, far better and faster on ball distribution? Deals with one on one better and far less error prone. The defence looks more confident with him in goal.

Clearing the decks is an understatement. This is a ridiculous squad overhaul we’re on!

With the exception of Mustafi and The Set Piece Clowns, we’re not as over-staffed as you might think.

Take out a few key individuals and, for argument’s sake, pretend their on a long term injury and you’ll see that the squad we have is about normal for a club going for three domestic prizes (top four being the principle) and a European pot.

If we can get £90 M for him then it would be a successful widow.

Don’t look at me, we paid 4M for Park Chu Young

COMMON ALREADY! We hit the refresh button one thousand times a day. Bring the new signing already. We are just one signing away from top 5.

No way is this guy anywhere near Premier league standard, so with talk of Martinez being sold to raise money, he could have been second choice – a nightmare scenario. I saw him in an actual league game, Plymouth – Southend, he fumbled the ball several times, including spilling the ball after a free kick, fortunately for him the Southend forwards were too inept to take advantage. I think he lost place soon after but regained it to his credit. Goalkeepers can improve with age, I hope he has a good career, I see it being at League 1 or… Read more »

Iliev is of similar standard to Macey and about the same age.

Hein, Okonkwo, Hillson and Smith are all as good as Macey and Iliev, in my opinion.

There are also 3 highly rated keepers in the under 18.

I think we have more keepers at the club right now than the rest of the league combined – Leno, Martinez, Macey, Iliev, Hein, Okonkwo, Hillson, Smith, Graczyk. Okonkwo appears to be a superb talent and we need to clear some of them and create space for him (unless he goes out on loan). But I think it’s very optimistic to expect to get any kind of fee for Macey – he’s L1-2 level at best and clubs at those levels are hardly awash with cash at the best of times. Sometimes it’s in everyone’s best interests to just part… Read more »

Maybe teams should have two 3rd choice GKs. Rotating out on loan and sitting around twiddling their thumbs.

Team should sell Martinez (or Leno) generate the income and allow the two third choice keepers to compete for number two.

Jesus 26 years old. I thought he was 19 of so. He definitely needs a permanent move elsewhere

Agreed, I don’t think he’d be too happy to look back and think he Stuart Taylored away his career. I like the attitude of him wanting to play and have responsibility. Good on him

It’s a bug*er to keep keepers “happy” for understandable reasons. Sooner or later, we’re going to have to bite the bullet between Leno/Martinez as it’s highly unlikely we’ll be able to retain both for any length of time. It was bye, bye Martinez until recently (and could still be with Villa apparently sniffing around) but he seems to be more secure now. If one is going, we could raise some much needed cash for re-investment in the current window. Decisions, decisions…

We have two potentially good keepers in Macey and Iliev. Makes little sense to have to bring in a keeper. We should be considering selling one of Leno or Martinez given our inability to generate income thanks to inexperienced trasnfer team and poor appropriation of priorities. Therefore if we sell say Martinez for 20m-25m and then have to buy a keeper for 10-12m, effectively we’ve only generated 13m for losing a good asset and it won’t go much toward meeting some of our goldilock signing targets. The same (if not worse) for Bellerin at again 25m and then bringing in… Read more »