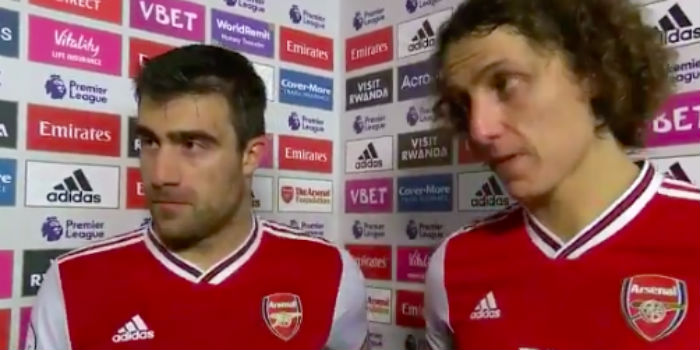 Arsenal have confirmed that David Luiz and Sokratis will both miss tomorrow’s opening game of the season against Fulham leaving Mikel Arteta with something of a headache when it comes to selecting his defence.

While new boys Gabriel Magalhaes and William Saliba are both available, the only other bona fide centre-back with Premier League experience is Rob Holding. It seems unlikely that we’ll play both of the new boys from the start so that could mean utilising Kieran Tierney on the left side of a three-man backline.

Luiz is suffering from a neck spasm but is responding well to treatment while Sokratis, heavily linked with a move to Napoli, has sustained a mild calf strain. Arsenal have three other centre-backs who are also injured. Pablo Mari, Shkodran Mustafi and Calum Chambers are long-term absentees.

The Gunners have also confirmed that Emile Smith Rowe won’t feature at Craven Cottage. The youngster’s arm is in a sling following a shoulder injury although the prognosis is a swift recovery.

The ‘only’ other absentee is Gabriel Martinelli. His knee problem, which required surgery in July, is set to keep him sidelined until the end of the year.

Arteta in constant dialogue with Luiz about his future

also , dont we normally play everton on the opening day ?!

Arteta will probably play Auba on the left, so Nketiah over Willian/saka

Please play our best keeper who clearly is Martinez

Sokratis, Pablo Mari, Mustafi, Luiz and Chambers out injured yet we still have 3 CBs in holding, Gabriel and Saliba available…. Talk about depth!