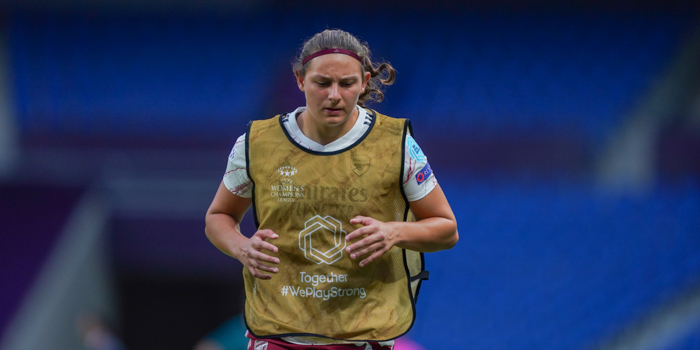 Arsenal’s young midfielder Mel Filis has joined Championship side London Bees. The 18-year old made her Gunners debut against Reading in January 2019, setting up a goal for Katie McCabe and was a regular feature in the match day squad last season.

However, her starts were limited to a Conti Cup run out against her new club, against whom she scored a hat trick and a start in the FA Cup against Lewes. Filis will join fellow Arsenal academy graduates Amelia Hazard and Billie Brooks at the Hive.

Bees manager Lee Burch said, “Mel has come in a little bit later than the other players, but we’re really excited to have good young English talent coming through the door. With what’s happened in the WSL with more foreign talent coming into the league, it’s going to make the top flight an exciting league.

“But many have said what about the good young English talent and we’re a Club who have brought in four talented young British and English players. For me, it’s giving them an opportunity that they won’t get at other clubs.

“Mel saw what Amelia (Hazard) did last season and it’s becoming a pathway that plenty of good young players have done by playing for good Championship clubs.”

#TB Mel Filis's assist for Katie McCabe's goal against Reading in the 2018/19 #BarclaysFAWSL was her first touch of the game, and it was her first-team debut. Promising ? pic.twitter.com/eQPLtWHrQX

Good for her for getting playing time, but still… *Grumpy Viv pic*. I just hate it when we lose promising kids.

Thought Mel had broken through into the first team for this season but perhaps the lure of regular game time was too large a carrot to turn down given where she was likely to sit in the midfield pecking order at Borehamwood.
It does make you question what the Academy is for when you look at the squad and the number of promising young players that have joined other clubs.

Same time it shows the quality cap. To have game time at Arsenal, being promising youngster isn’t enough, because ahead of you are only world class or high international level players. Straight from academy to Arsenal first team is possible to get only when player is once in generation talent, like Leah. And it is same in Chelsea and probably also City. We have lost a lot of talent in last few years, but none of them are in the level, where she would start for Arsenal (I don’t think Chloe Kelly would start for us). And if we wanted,… Read more »

Wise words. I hadn’t seen it that way. So is Ruby Mace staying because the club really rate her?

Looking at recent years the “break” time comes around 18th birthday when the girls become women in the sense of signing pro contracts. I believe Ruby Mace is still only 16. So another couple of years of training in the first team squad environment will do her development no harm. Of course she may well be the “next Leah Williamson”.

Glad you mentioned Lotte Wubben-Moy and Anna Patten – they were quite the duo and in difficult circumstances, too. Would love to see them back at some point.

A good question. What is the point of running an academy? Apart from FA rules that it is mandatory to have an academy to qualify for a WSL licence. If it was to produce a steady flow of talent for the first team then Silent Stan’s bean counters would have cut the expense a few years ago, since one first team regular (Leah) in 10+ years couldn’t be classed a run away success. The talent loss this summer seems (to me) particularly annoying. Silvana Flores( Chelski bah!), Ruby Grant (West Ham until her US college deal can be resurrected) and… Read more »