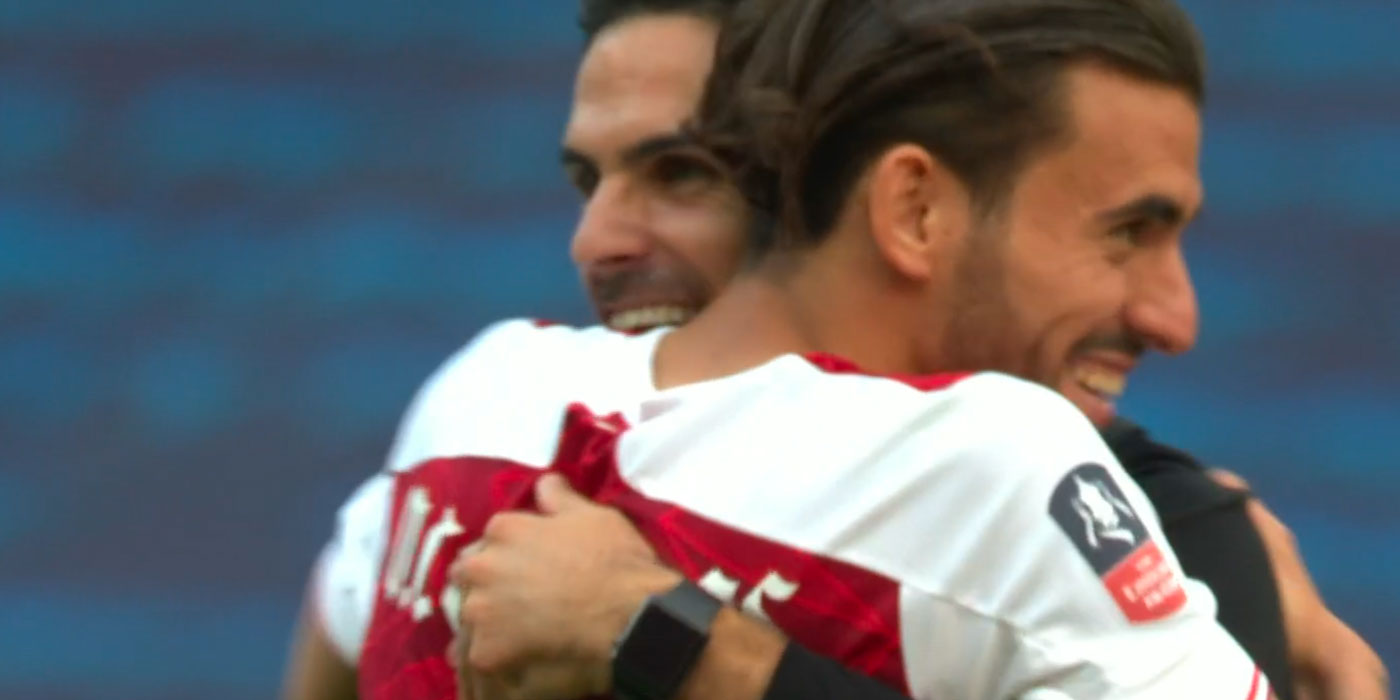 The Spanish international become an important component of Mikel Arteta’s side last season, and played a key part in our FA Cup success.

He formed a solid partnership with Granit Xhaka, catching the eye with his energetic, committed performances, which also brought some small measure of creativity to our midfield.

It was quite a turnaround from a few months previously when he gave serious consideration to cutting short his loan spell, but having been challenged by the Arsenal boss, he responded by ‘training like an animal‘, winning over his compatriot to become a regular starter.

Arteta was keen to bring him back, saying, “Dani knows really well what I think about him. He was pretty clear with me as well that his intention was to remain with us.

“We really saw in the last few months of the season what he is capable of bringing to us.”

Last season, Ceballos made 37 appearances in all competitions, despite missing months due to a serious hamstring injury, scoring twice and making two assists. He will be looking to improve on those stats during the new campaign.

It’s good news for the Arsenal midfield, which is still an area of uncertainty, but securing the 24 year old – who is desperate to play for Spain in next summer’s European Championships – is a positive development.

It’s believed there are no obligatory purchase clauses attached to the deal.

“We’re all delighted to welcome him back and we look forward to seeing him pick up where he left off.”

Really hope there’s an option to buy in there too

As much as it would be nice i don’t see how we don’t get the option, whether its contractually obliged or not. Maybe it’s for a lot more money than it would be now, but by all accounts he absolutely loves the club, so assuming he does well I dont see how that would change. Perhaps its £40m rather than £25m, but I’m not desperately worried about losing him to someone else. Blind optimism perhaps..

Welcome back Dani…. Delighted to have you with us. Now let’s complete our transfer biz as quickly as possible so we can bed in the new players seamlessly given as the season starts in just over a week. An Aouor and a Partey would be nice

Fuck yeah! Love this lad. Took a while to win my trust but I’d take Dani over Partey or Aouar at the minute. Just goes to show what a special manager Arteta is. Ceballos was misfiring a little and it looked like he could be back on the plane to Madrid. From there he could have ended up anywhere and hit a cul de sac in his career. But Mikel nipped it in the bud, got him motivated and now we have one of the most promising young midfielders on the planet for next season. Loving our work this summer.… Read more »

You mean keep getting him on loan until he becomes a free agent ?

Sounds like a wrestling move or sex position: the reverse Wellington

What a great news!
I think if we add only 1 more piece of the puzzle (Partey or Aouar) we will be ready for a fight against any other team…

Yeh, I think a CM to come and a few more to leave and that will be it. I’m excited for this season!

Reflecting on where we were just nine months back.
Now– close to back in the hunt. Players committed to a dynamic manager. Beating quality teams in pressure situations.

Anyone know what is the details of this loan deal? It is not mentioned in the article. Will Arsenal has a option to buy at the end of the loan and how much will it be?

We will discuss that later. For now let’s enjoy the good news

Let’s hope there is some firm information to discuss. Some details usually come out so watch this space, really.

Here’s hoping the season goes so well that he won’t want to return to Madrid. Welcome back Dani.

Yes, but we’re in a Catch 22 situation here. Assuming there’s no purchase option in his new contract, if he has a cracking season for us Madrid will want a cracking fee for him. We may, or may not, be able to afford that – and at least two other European teams were sniffing around. Clearly nothing came of it this time or wouldn’t have returned to us but at the end of next season, who knows?

Would take a one season wonder, who knows his buy out cluass, if he’s good enough we can sing him his own song, when he feels the love defo 5 year contract signed.. ooops forgot No fans this season..

We have him for this season, game by game.

I think this is great for both clubs. Arsenal get a player that really came on during the restart with Arteta. Saves us spending a lot on 2-3 midfielders. He will get games with Arsenal and improve. And Real will get a polished player to either keep or sell.

He always celebrates all of our goals really passionately. Love that about him.

And from the way he was watching/celebrating the Community Shield match!

Yes! Welcome back Dani. Love his passion for the club. Also, without his goal against Sheffield in the FA cup, we may have missed out on Europe!

We need partey next!

Potentially the most important signing of them all

Is he officially the first player to be on loan to Arsenal for two consecutive seasons? And the second to actually make an impact inhis loan season (after Yosi Benayoun) ?

Great news. I understand that this is his final year in Madrid meaning he stays with Arsenal for free after this season.

No, he still has 3 years left on his contract with RM

You need a new source for your intel

You were thinking of Cedric….

He’s one of us already. He love the club and fans love him. We should make his loan permanent. I think Arteta will make him a top deep laying midfielder if he stay longer with us..

Other than Auba signing a new contract (still waiting!) this was the most important piece of business IMO. He brought so much to our game.

So so glad to have him back

Good news. Let’s hope he stays injury free so he can get a really good run of games from the start. No firm information about any options when the loan period ends, perhaps something may come out in the coming days.

Tactics —> Pep Talk —> Passionately —> Pick up where you left off!

Not bad news, that’s all.

Huge for the club, midfield is where we had the biggest problem and he solves it, at least for a year.

Now do a Guendozi Party swap, swap loan deal between Ramsey and Ozil and we are done

Agree! Özil + Ronaldo again would be a dream. And at least Juve wouldn’t pay a player for nothing as they do for 450 000 € a week Ramsey.

In the FA Cup final, after the first 10 mins when we were under the cosh, Ceballos dropped a bit deeper and was suddenly dictating things from midfield, we then started to push more up the pitch. He has a big influence on how we play, this is a good thing for us.

This is indeed excellent news. We can’t afford too much flux. As is the backline is a bit of an IF given 3 new players in Mari, Saliba and Magalhes have to gel. Plus we don’t seem to be able to shift Laca to Juve (Suarez being offered and Barca clear out will have an impact) Thereby Bellerin potential sale may carry further risk for us bc it may mean we will retain Kolasinac on left as back up to Tierney with AMN shifting to back up Soares. And that may have its own impact on transfer money as Kolasinac… Read more »

Dude. Just start your own blog.

For what, for more people to ignore his constantly negative takes?

Just a thought: we have Tolaji Bola from the academy who has shown through some strong U23 performances that he is more than capable of being a good backup LB. Regardless of the Bellerin situation, I would still consider Kolasinac a ‘sellable asset’.

…would be good to know how much he may cost us a season down. Open end means they can jack the price on us should he continue to perform and improve.

Would have been good to have an offer for option.

To watch…what Barca/Koeman will do after they move Suarez on.

Who do they want up top. De Pay mentioned, surprised they have not gone for Dembele.

On that note, some rumblings Auba is waiting on Barca potential offer.

If it happens we need to sell and for a big amount.

So chuffed to have Dani back with the squad. 37 appearances with injuries sandwiched between is pretty great. He really must have pushed himself to regain fitness.

Whatever his expectations are for this loan, I hope he meets them?

So same cost as last year? £15M. To please him so that he can be fit to play for Spain. Passion, my a$$. The same was said for Sanchez.

Ignore him. He’s a troll who copy-pastes the same point in every Ceballos-related article.

Really, really, really! happy with this. The centre of our midfield has lacked someone with his skill for many years now. I’m hoping his renaissance last season wasn’t just a fluke, but is the start of something beautiful. Welcome back Dani!

Things are getting exciting now as the signings tick along. Ceballos was bringing alot to that position already and I can see Arteta making him even better this year. Technically great player with good movement who really seems to enjoy playing football the Arsenal/Arteta way. More good times ahead Dani! More silver as well!

Great news!!! Anyone know why the Abu deal is taking so long? What we waiting for? Abu’s contract should be our number one priority over all other transfers.

I read a comment of a fan wishing the club would re-sign Ramsey. I also love Rambo but who would you start between him and Dani at 8? Why? Then would Ramsey be willing to sit on the bench?

If, over the course of the season, we are going to transition to a back four, we either need at least one more midfielder, or a revolution from internal players — not impossible, but …

I really can’t understate how happy I am for this. I had real worries about midfield. Both in numbers, talent and type. He seems to really be a type Arteta needs. And solid DM signing and and Star AM and I actually think we have a squad with the potential for top 4

Why do you want to understate?

Excellent. I do think Real are being cautious about selling him though. I think they know he’s a talent but Zidane doesn’t fancy him so, in the case Zidane flops this season and they’d sack him they can bring Dani back with a years playing time under his belt and a place in the Spain squad. Suddenly he’d look like a new signing to them and they have done none of the hard work.
That’s worst case scenario I guess. I hope, by the end of the season, he will be our player permanently.