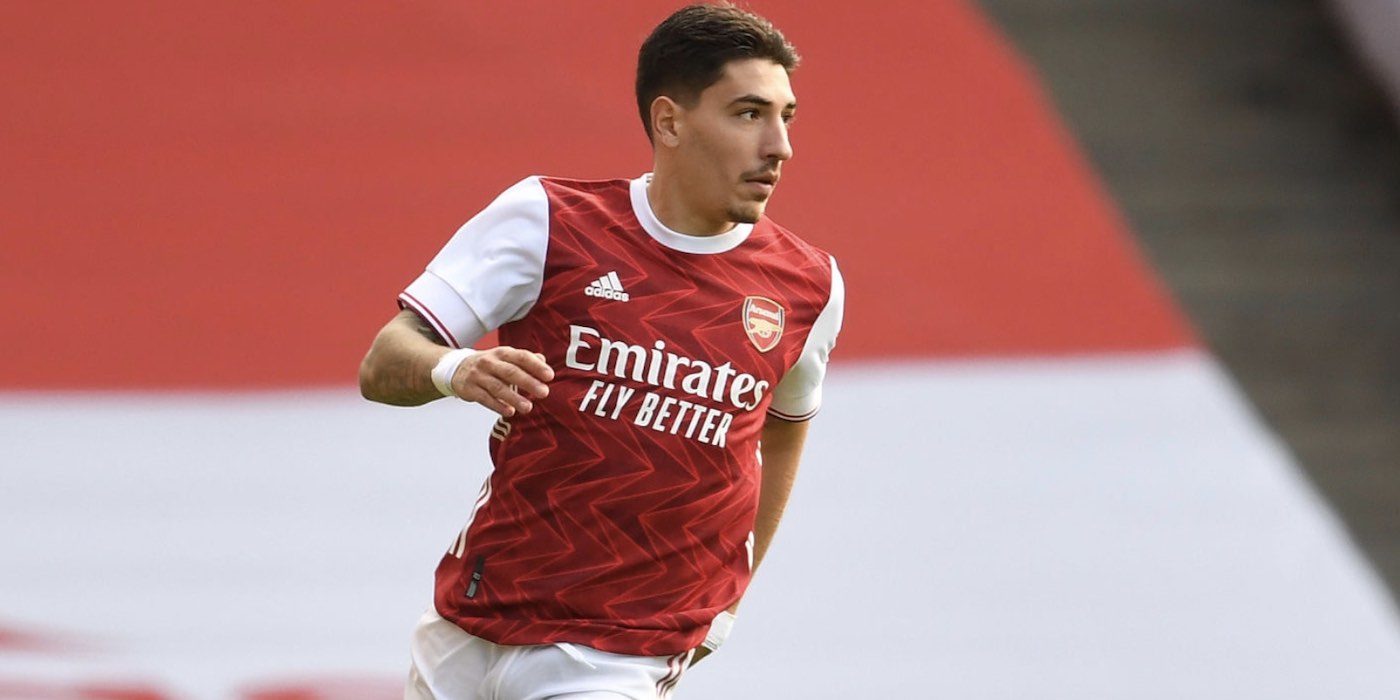 According to Catalan daily Sport, Barcelona have explored the possibility of a move for Hector Bellerin.

The paper says that an initial conversation took place between Edu, our Technical Director, and Barca’s technical representative – but that it didn’t last long.

This is because, apparently, the €20-25m it would take to bring the right-back to the Camp Nou is beyond their financial ability right now.

Arsenal fans will be chuckling at the idea we might let Hector go that cheaply anyway, having sought more from PSG after their offer in that ballpark, but the Catalan side’s situation is complicated by their need to sell incumbent right-back Nelson Semedo.

They are trying to move him to the Premier League to get the money to reinvest in Bellerin, and are looking for his agent Jorge Mendes to make something happen (perhaps a move to Wolves?!).

The report does not state that Barcelona execs have travelled to London, and all in all this feels typically like one of the spurious transfer stories that emerge from Spain during every single window.

Bellerin, of course, began his career at Barcelona, leaving La Masia to come to Arsenal at the age of 16.

We’re not feeling this one, so the Poo-O-Meter is high.

50 million and then we can think of it.

50 million, Coutinho and a vial of Barcelona DNA that we can sprinkle over Ozil.

An anti-ish Ozil post, but it made me chuckle nonetheless. Only you could get away with that, J4H. ??

If only…. There’s very little chance of getting that kind of money in this market. Look around, with the exception of Chelsea (for whom the usual financial rules don’t really apply for obvious reasons) nobody is splashing substantial cash. Lots of talk, there always is, but little “do” when it comes to transfers. The fact is we need to bring in money to balance the books and give Arteta funds. It’s been all one way so far – money out and hardly anything coming in. I think we’ll seriously consider selling Bellerin if there’s a “real” bid of over £25… Read more »

Hector is a boss. He’s arguably one of our most valuable assets. If they aren’t stumping up the big kahunas they can jog the fuck on.

You do realise Biggles and his begging bowl will be here putting you to rights any second now……..

Yes, if that works but a player is only worth what the particular club is prepared to pay. If you’re lucky, that’s a good sum (for example, Valencia couldn’t have believed their eyes when we paid £35 million for Mustafi – using that 2016 “benchmark”, quality central defenders would regularly be sold for around £100 million each now). We need to raise money – if it’s not Bellerin, Martinez, AMN, Lacazette, etc. etc. (we’re good on this site at saying who shouldn’t be sold), who are we going to sell for the fees we need? Torreria may be in the… Read more »

Incorrect, a player is worth how much you sell him for.

Aaah, don’t be a spoilsport, he’s got his eye in now.

50m a bit unrealistic when his current market value is at 35m.. I’d say if he goes he’d go for anywhere between 35m -45m no one is going to spend 50m on Bellerin lets be real. But I won’t sell him for anything less than 40m, If Barca or PSG want him they can have him for 40m+

£50m or they can fuck off. Thank Christ you’re not in charge of the club’s transfers.

Ha! You write, “But I won’t sell him for anything less than 40m, ….”
﻿
Better let Edu and Arteta know. They are SURELY both waiting with bated breath for you input on player deals.

50 million and Lionel Messi. That should do it

I’d rather keep Hector at the club to be honest…

Would this make Hector the first ever Cockney to have Barcelona DNA?

A swap with Messi is not a bad idea.

Swap him Coutinho and we have a deal

I think Messi will re-sign for Barca

A Different George
Reply to  gooner

What? No one is willing to pay his release clause?

This time all those poohs actually give me relief! I don’t mind if there isn’t any “movement” in this case hehe

The all-new joys of constipation.

As Anti-Arsenal-Shit-Stirrers go, they’re right up there with TalkSport and The Daily Mirror.

Swap with Messi then we’d think about it ?

please echo this until it gets to edu kasper karlsson plays like c.ronaldo he is just 22yrs & better than all our youth attacking midfielder. Arsenal sign should sign this lad.

hector and mustafi in a double deal for £90mil , messi on loan for 2 years and we contribute 5% of his wages. and first refusal on all their academy players until 2050. and some jamon ruffles.

You forgot the chocolate river and the publishing rights to The Beatles entire catalogue….?

And, anyway, even in the most far-fetched of circumstances – even ones that would appeal to Roald Dahl or Michael Jackson – how is anyone going to be interested in a deal with Mustafi in it?

And that gnashing sound you jist heard is them getting ready to bite our hands off.

Never look a gift horse in the mouth.

I’d consider a swap of Messi for Bellerin, if they cover 70% of the little guy’s wages.

They’d also need to take Guendouzi on loan with an obligation to buy for 35+ million.

Not sure even a Messi-swap deal would change my mind. Hector is basically one of our own (even though he came as a teenager)! And I’d rather we stick with him.

I would have taken Semedo and some cash as a swap deal for Bellerin if we hadn’t already signed Cedric.

I do not know why this is being down voted. Semedo is younger and still has that pace Bellerin is looking to have lost. He is more solid defensively than the open/gung-ho Barça system allows, leaving him exposed, usually and we get to make some money whilst providing sufficient cover for the position.

I do not know why this is being down voted.

A huge premium on the price for them being the biggest cunts on the planet. God I loathe that fucking club.

A Different George
Reply to  Goldfingered

I don’t get this. Compared to who? Real Madrid? PSG? Man City, Chelsea, Juventus, Bayern?

With Bayern we’ve got the Gnabry saga and chelsea of course Cole, but both pale in comparison to how disgracefully Barca behaved in tapping up Cesc when they didnt even then use him.

Whatever the ownership situation or business practices of the other clubs there just isnt the same beef as with Barca.

Is it bad that I’m happy that Barca are in such a mess right now? Thinking back to 2006 and all the shit that went on with Cesc after, it’s no wonder I’m happy

Also, we’ve had some theatrics going on for a few years, and I’m sure Barca pay well and the weather is nice – but it’s a complete circus there.

This isn’t me trying to convince him to stay at all… just.. you know… PLEASE DONT GO!!!

Make a sensible bid or piss off.

Honestly, what a joke this club have become thanks to Kroenke’s refusal to invest.

The whole of world football thinks we’re fair game for a pittance. Pathetic.

Looks like our Mr.Blogs has taken a one big dump this time with regards to this. ?

DNA thieving so and so’s have started again??

Meanwhile, Kroenke is at the SoFi stadium ‘ribbon-cutting’ night.

Shame the fucker couldn’t cut a few purse strings in our direction.

They did Cesc dirty with that ? No way we’re falling for it again.

Fuck off Barca you rancid club.

Who wouldn’t mind getting Semedo in a Swap deal?

I know straight swaps are always rumoured and never completed, but what about Hector for Semedo? They want rid of him, clearly, and supposedly want Hector, so they would presumably be interested. As for us, I think Semedo is a comparable sort of talent to Bellerin, even if his stock isn’t at its highest right now. They’re both very good going forward, with Hector maybe having better physical attributes while Semedo is more technically capable, particularly with his left. Both can be defensive liabilities at times. So we’d get a similar kind of player, but with the ability to play… Read more »

I would not sell to Barcelona. After getting Henry for only £21Million, they want to pull a fast one and buy one of our stars on the cheap. I am not sure why Arsenal cannot sell their best players for good fees, we always sell on the cheap.
I would rather him go for free than to give him to stingy Barcelona. They are a terrible club with terrible people and I wish them a life long of misery.

No way they’re having one of our 5 captains. What kind of club goes about with only 4 captains?

He is a captain of my fantasy team against Fulham ?