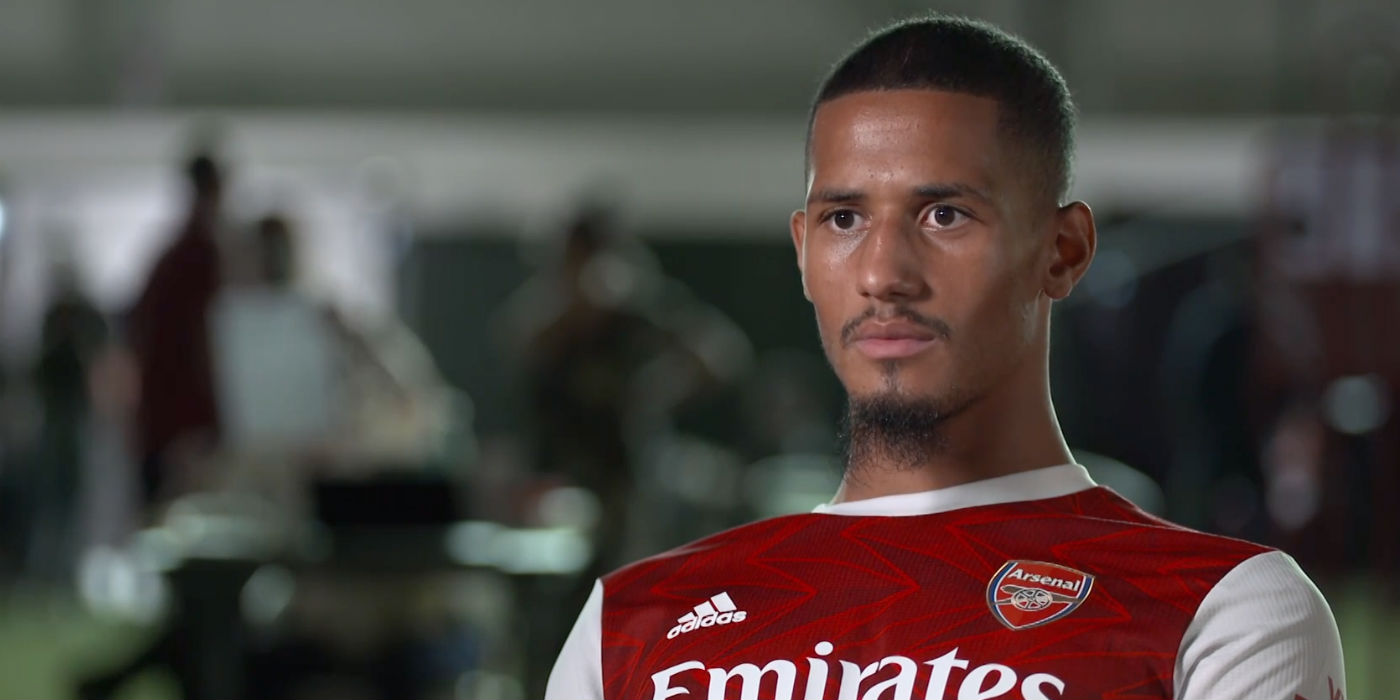 Williams Saliba has revealed he owned an Arsenal shirt with Thierry Henry’s name on the back when he was growing up and admits it’s exciting to be following in the footsteps of so many great French players.

Having spent last season back on loan with Saint-Etienne, the 19-year-old defender, thanks to a spate of centre-back injuries, could make his long-awaited Premier League debut against Fulham tomorrow.

Ahead of the trip to Craven Cottage, he attempted his first media interviews in English, telling BT Sport, “I’m very happy to be here and I’m very excited for the next [step].”

He added: “Yes, [it’s a dream come true] because it’s a very big club. When I was little I bought an Arsenal jersey with Thierry Henry [printed on the back]. Some years after, I’m wearing the Arsenal jersey. I’m so proud.”

The teenager also revealed that he’s already struck up a rapport with fellow new boy Gabriel Magalhaes via a mutual friend.

“I’ve already played against him in France and I have a friend who knows him,” he revealed.

“I’ve spoken to him since he’s come here, I’m very excited. We are young so we have to learn from defenders like David Luiz and the others.”

“I want to protect the player” – Arteta on Saliba loan move

The best striker of all time.

Now people will be owning Arsenal shirts with Saliba on the back, for many years to come

This guy looks awesome; power and strength Our rock, hoping he can be as good as Van Dyke.

Who is Van Dyke? Let him be as good as John Terry (apologies)

God is a Gooner
Reply to  Thierry Bergkamp (non negotiable)

Love that he’s rocked up to the new club with a buzz cut
He means business!

Dave cee
Reply to  God is a Gooner

We are young so we have to learn from defenders like David Luiz and the others.”

Well that’s us fucked then.

Lots of people in this site dont understand jokes. How sad.

We do, we just know the difference between good and bad jokes.

Good and bad are subjective. Grow up, the world’s not revolving around you kid.

Seriously, though, I have never heard–in any sport, and I follow quite a few closely–of so many players on one team ever citing a veteran mentor like David Luiz as much as the guys on this team have. It’s just Luiz, Luiz, Luiz–you could be forgiven for thinking it’s some kind of inside joke among the players, it happens with such frequency.

Anyway, it’s funny, but I guess it really does help to explain the value the club sees in Luiz.

Well done mate. Managed to avoid saying that you were a Sp*ds fan……

Had a great game. Decent goal, off the shoulder. He’s a big fucker isn’t he. Just what we needed. Can’t wait to see how he gets on ?