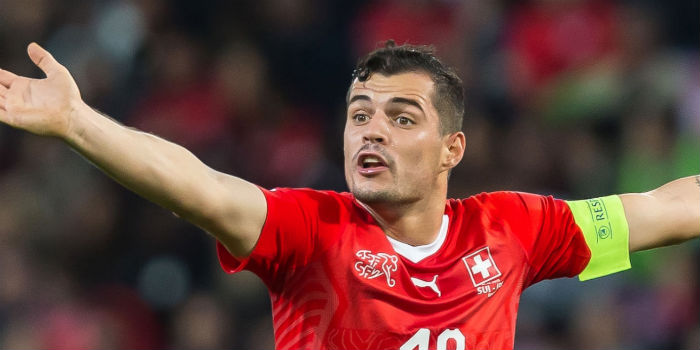 Switzerland have confirmed as Granit Xhaka as their new captain.

The 27-year-old inherits the armband from ex-Gunner Stephan Lichtsteiner who has decided to hang up his boots in August.

Xhaka has led his country out before in Lichtsteiner’s absence but, unsurprisingly, he’s honoured to take on the role full time.

“It’s a real pleasure to meet again with the national team after a ten-month break,” Xhaka said.

“As the new captain, I am extremely proud to be able to play for my country, and moreover to represent it in the captain’s role. It’s a dream come true.

“We are happy to be able to count on your support and we promise we will do everything to bring you joy in the upcoming campaign and also in the future.”

The news marks the latest upturn in fortunes for a player who was stripped of the Arsenal captaincy at the turn of the year after a very public falling out with the club’s supporters.

Since then he’s earned the trust of new boss Mikel Arteta, regained his place in the Gunners midfield and picked up a couple of bits of silverware.

Switzerland face Ukraine and Germany in the Uefa Nations League during the Interlull.

This man probably has had the best redemption arc in the club’s recent history.

He may not be the most mobile but so isn’t Henderson. Surround him with quality players and he is a decent enough option.

Are you kidding? Henderson’s work rate monstrous compared to Xhaka’s!

Henderson’s strength is his athleticism, which is what Klopp’s Liverpool demands. Klopp’s Dortmund played differently with Götze and Kagawa. Liverpool wants more options from MF, which is why they’re trying to replace a workhorse like Wijnaldum with Alcantara, a technical upgrade. Xhaka is a deep-lying playmaker. He was compared to Xabi Alonso when he was making a name for himself at Monchengladbach. We are looking for Partey and Aouar in addition to Ceballos for more dynamism, energy and technique. It’s the system that matters. As Arteta has shown, with good coaching, a team of average players can look competent.

Henderson is a weird comparison seeing as his mobility is arguably his greatest strength.

All the same, Xhaka hasn’t put a foot wrong since Arteta joined and is easily playing his best football in an Arsenal shirt since he got here. Will he continue to perform as Arteta seeks to make us a more expansive, front footed team? We’ll have to see.

Sometimes when a person has a lobotomy, they get weirdly athletic.

Is it just me or does he play a bit like Arteta used to? Don’t Lynch me!

Decent at best. If arsenal played the Swiss National team I’d really hope we could beat them—captain of Switzerland isn’t much of a standard for an arsenal player. We need to sign partey and start him alongside ceballos and bench xhaka.

Matter of time before he tells an entire nation to [email protected]&k off then.

That may not be fair or true or right. But it is funny!
Have an upvote.

People are too sensitive, this is funny.

I sincerely hope you weren’t one of the toxic supporters who sent him abusive tweets including wishing his daughter had cancer. Maybe he has some excuse for being angry

Up vote for the comedy.

I know you’ll downvote me, but i would offload him while he still has some value. It would raise funds for quality and perspective players in same position. Unfortunately, our mid is pretty shambolic right about know, and others are on the way out, so he is an automatic starter, when he should be a sqaud player at best (excluding all the controversy). He did look solid in 3-4-3 but this is makeweight formaton for Arteta since we didn’t have quality mid (still the same) or def (hopefully getting sorted). With 4-3-3 and more attacking football, he shouldn’t be in… Read more »

The reality is Arteta is getting more out of average players than a lot of coaches would, but the fact remains they are still average and we should always be looking to improve in those areas. Unfortunately we haven’t got an unlimited transfer budget, which is why it’s quite incredible to see what Arteta has done over his tenure.

Are you really suggesting that Xhaka is no more than average? Also I can’t think we have a surplus of average players.

Xhaka is no more than average.

Put it this way. If we were to sell him you think any of Chelsea, Liverpool, Manure, Mancs or even $p*r$ would be in for him? Remember when he was available it was Newcastle and Hertha – average teams in for an average player. He is perfectly suited for teams like that. He is disciplined and tactically astute and performs well when we sit back and defend. When we try to control the game, he gets exposed on the counter, his strengths are easily mitigated (forced right – passing shut down & pressed to limit the time on the ball… Read more »

That’s why he’s made captain? A good Xhaka bis reliable.

He’s certainly improved under Arteta’s coaching, no doubt about that. The captaincy of his country will no doubt be a boost for him.

Gotta hand it to his parents.. They knew he was a future captain of his country, so he totally deserved being in charge of the house keys ahead of his brother.

Lol, I’m not following. Is there a pun I’m missing here?

When they were young, his parents gave him the house keys over his older brother because he was responsible and reliable. I hope you now follow?

A Different George
Reply to  MarcOverPass

The real humour is the fact that he himself told that story when he arrived at Arsenal to show his leadership qualities.

Oh wow that’s incredible?. Thanks for explaining, I didn’t know of that anecdote from Xhaka.

Who knew asking a genuine question can lead to cause a disapprovals.

Ain’t nobody got no time for you so called ‘fans’ who don’t know every detail of every players personal history.
😉

We need to know the answer to the real question – who are the other 4 captains of Switzerland?

Who the troll knows?

Captain Hook, Captain James Cook, Captain Jack Sparrow and – determined by dressing room vote – Özil. He was offered the role of non-playing captain for 350,000 francs a week, but was rumored to have a better offer with lighter work schedule elsewhere.

The joy of Arteta is that I had forgotten all about Lichsteiner.

This surely says a lot about Xhaka. There could be limitations to this player but there must be something about the man that makes people see a leader in him. From Gladbach, Wenger, Unai, Arteta and Swiss team, he’s always been a mainstay in those teams.

Fair play, peace and success to you Xhaka.