ARSENAL 1 [McCabe] SPURS 0
There isn’t much to analyse with Katie McCabe’s free-kick other than to purr over the execution, so let’s break down the move that led to the free-kick. Joe Montemurro urged the team to “find their rhythm more quickly” and they responded to the call.

Shortly before Schnaderbeck is fouled, Arsenal build down the right and Mead’s pull-back is cut out. Arsenal go back to Jen Beattie when Spurs half clear the ball and she passes to Williamson to her right. Look at how far Arsenal have already pushed Tottenham back in the opening seconds. 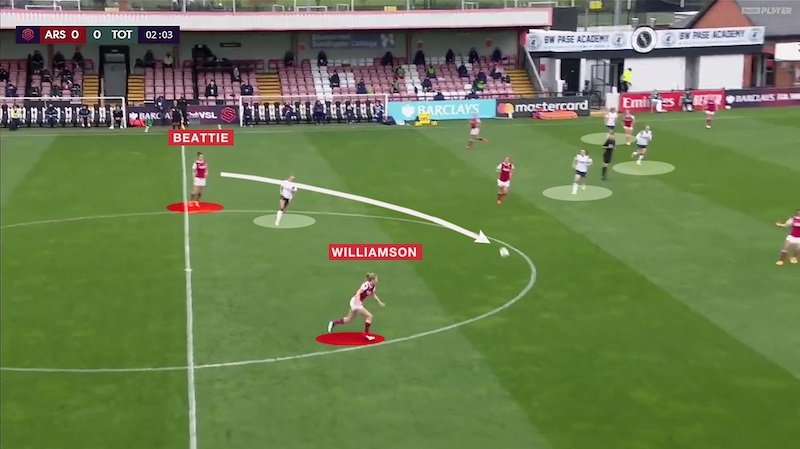 There is plenty for Leah to do as she slaloms her way past two Spurs defenders. Williamson drags Addison away from the left-wing and look at Beth Mead, who has moved in from the right flank and taken Spurs left-back Kerys Harrop with her. 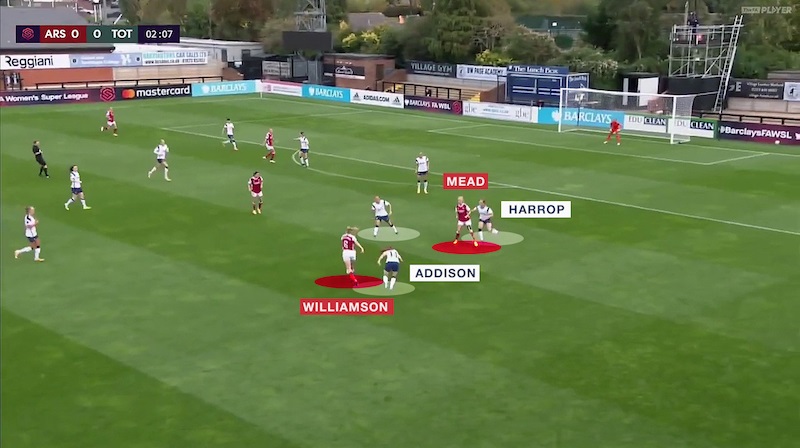 Williamson’s dribble and Mead’s movement in from the flank has opened up a big space for Schnaderbeck to attack. Harrop realises she is out of position and has to rush to Schnaderbeck and make a rash foul. 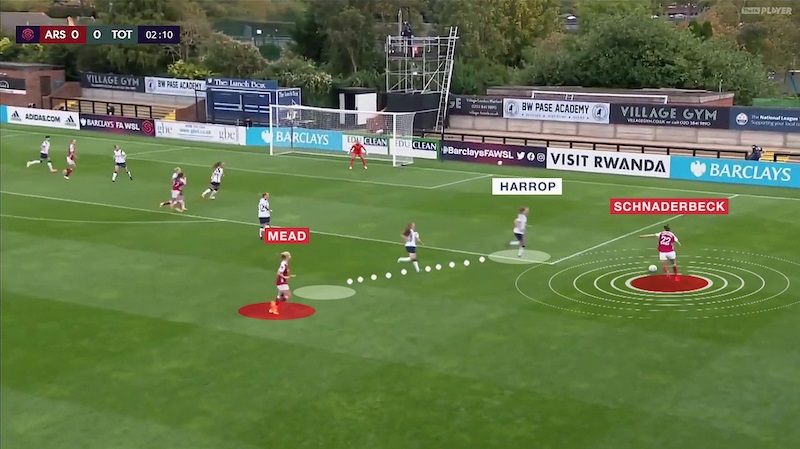 For the second goal Arsenal take advantage of the Dutch connection with van de Donk and Miedema combining. Foord has her part to play in this goal despite not touching the ball. Once again, Miedema and Foord have swapped roles, with Viv able to drift to the left because Foord is filling the centre-forward role. 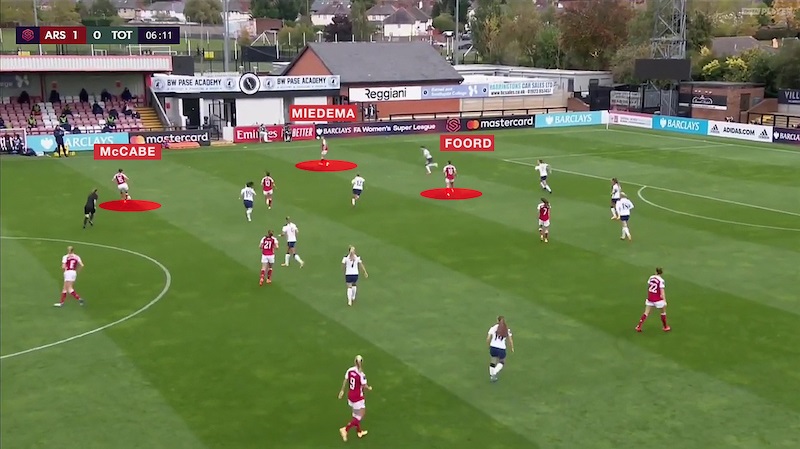 Miedema collects the ball from McCabe on the left and brilliantly dribbles her way past two players. As she does, van de Donk has already pictured the next sequence in her head. Initially she had drifted into the centre to see if someone can put her through on goal. As Miedema beats the two Spurs defenders, she comes away from the number 9 spot and races into the number 10 zone. She already knows that Miedema will continue her run so she has come short to knock the ball around the corner. 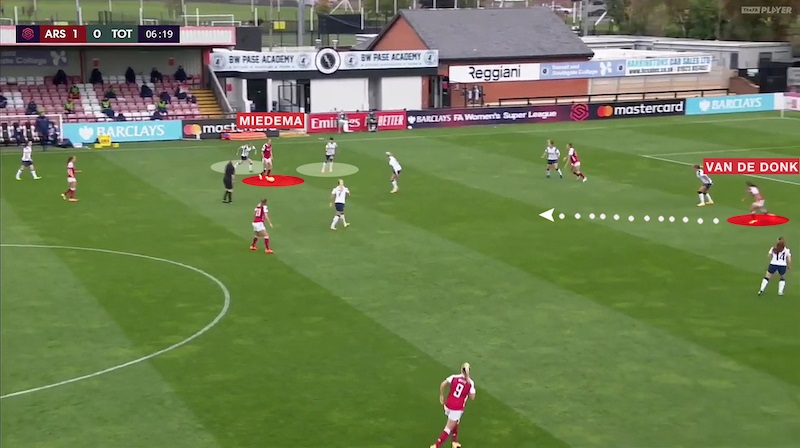 Because she has already forecast the move, van de Donk has time to consider her delivery and she obliges Miedema’s run with a gorgeous touch with the outside of her boot and Miedema’s pace and onward momentum sees her streak ahead of the Spurs defence. It’s an ambitious move in a tight area but van de Donk and Miedema know what is going to happen before it happens and that gives them the edge. 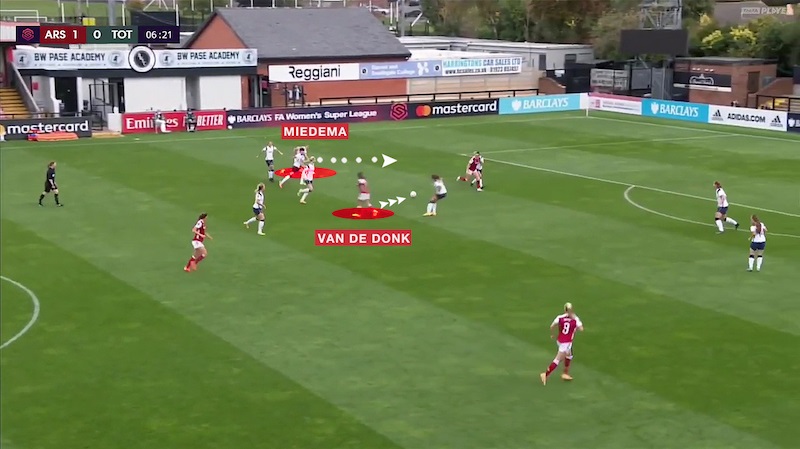 There is a potential to cut back to Foord in the six-yard box but Miedema made her mind up very early in the move that a give-and-go with van de Donk would put her in on goal and that single-mindedness shows with an emphatic finish. 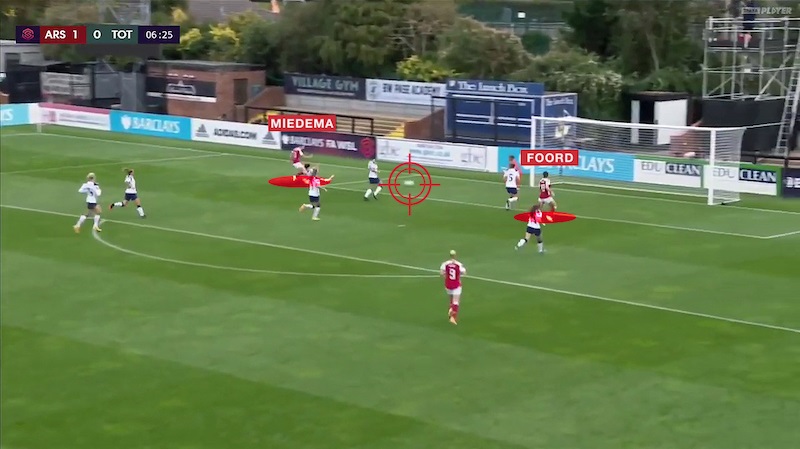 SHE'S DONE IT!@VivianneMiedema gets her 50th #BarclaysFAWSL to make it 2-0 to @ArsenalWFC! 🥇 pic.twitter.com/P7fi6BdoI8

This goal owes a lot to the understanding between Miedema and Foord once more. Williamson plays the sort of pass that has become her trademark [remember her identical pass to Jordan Nobbs against Birmingham in January].

On the face of it, it looks like a straightforward pass into space for Foord to finish but, again, Arsenal’s movement suckers two Spurs defenders away from their area. A few minutes earlier, Williamson has the ball in the right centre-half position. Arsenal prepare this play often, with Beattie and Williamson spreading wide when Zinsberger has the ball to separate Tottenham’s press and give themselves space to play forwards. Miedema comes short on this occasion and Williamson passes to her and Spurs press Viv successfully, forcing her backwards. 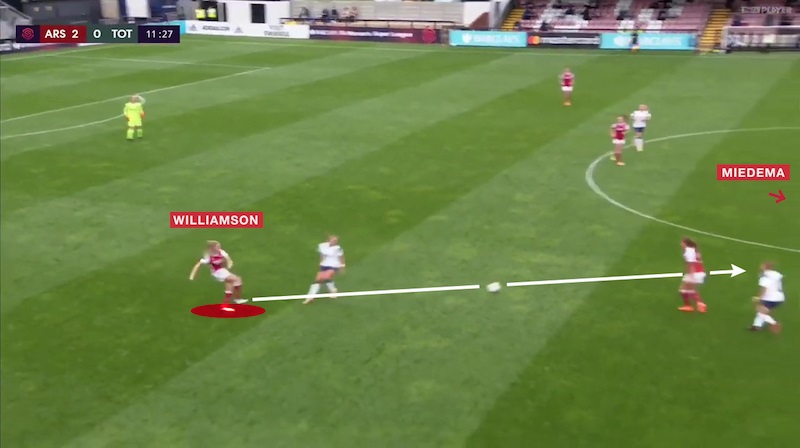 The success in snuffing out that move gives Spurs the confidence to follow Miedema again when Williamson receives the ball in an identical position three minutes later. Miedema offers to come short for Williamson’s pass and Kerys Harrop- playing in an unfamiliar left-back role and Shelina Zadorsky are both attracted away from their defensive line. 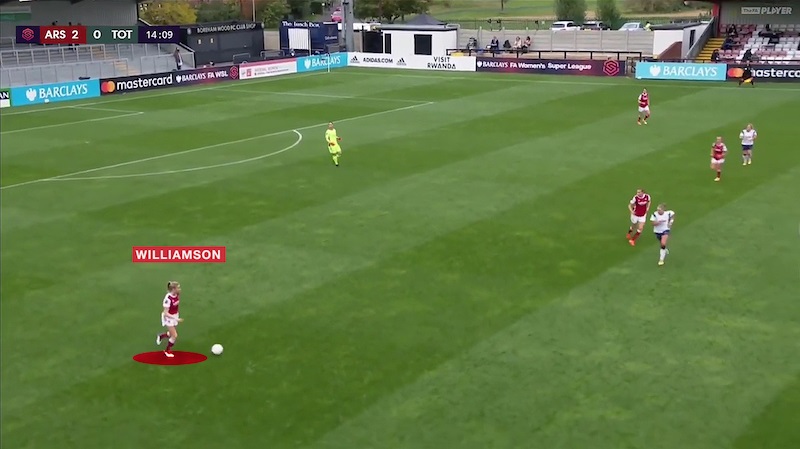 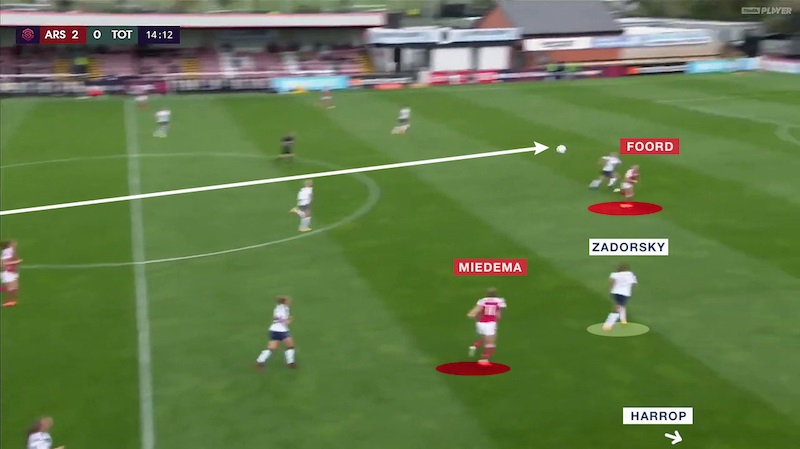 By the time the ball arrives at Foord’s feet, look at where Harrop and Zadorsky are. Being attracted to Miedema has taken them away from Foord who now only has to fend off one Spurs defender before slotting past Becky Spencer. 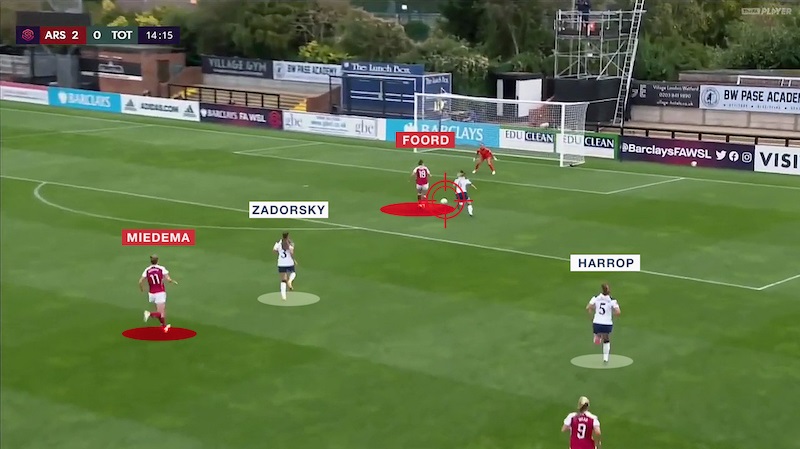 The fourth goal is as much about Tottenham’s sluggishness as Arsenal’s quick thinking. Once again, Arsenal make Kerys Harrop uncomfortable, with Beth Mead standing in the right half-space. Harrop is again not sure whether to engage Mead or stay in her position and she ends up making a clumsy foul on Mead. 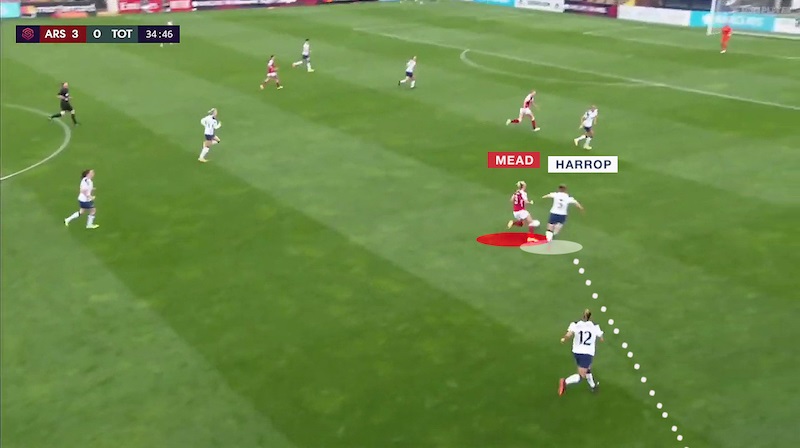 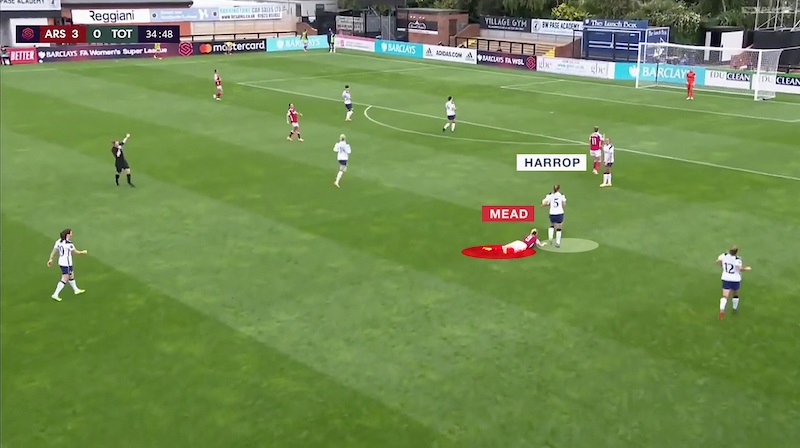 Tottenham’s decision to play a solid centre-half like Harrop at left-back proved to be a huge error. At this stage, Karen Hills is preparing a double substitution which may contribute to concentration levels dropping as Arsenal size-up the free-kick. A lot of Spurs players were candidates to be subbed and a fair few might have been hoping for a swift exit.

It doesn’t take an awful lot of analysis to deconstruct what happens next. Miedema is ambling towards the area and she spots a big space to run into. 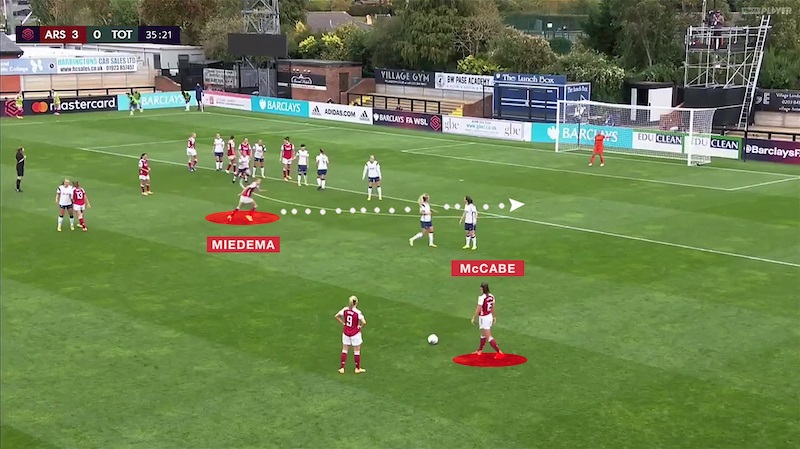 McCabe appreciates the run and plays the ball into the enormous space. By the time Spurs realise what has happened, Miedema has already shaped to shoot and Alana Kennedy’s last-ditch slide tackle can only help divert the ball into the net. 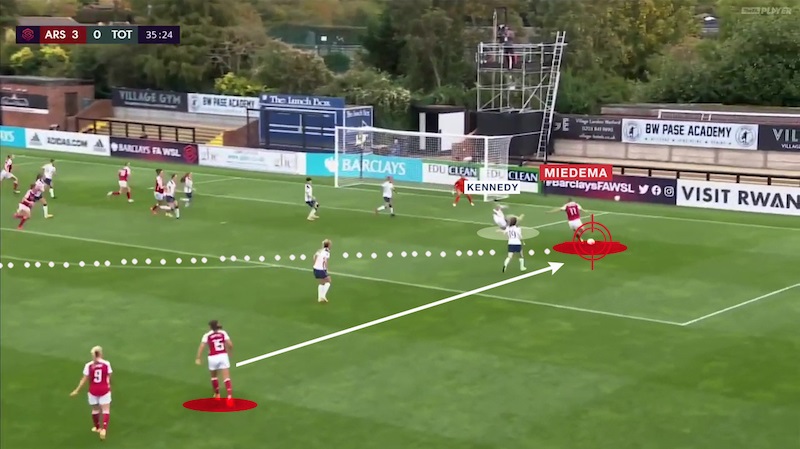 Running RIOT! 😱@ArsenalWFC have a fourth – who else but @VivianneMiedema?! #BarclaysFAWSL #NLD pic.twitter.com/z7hAeQ8lit

Once again, the fifth goal is about Miedema being more alert than a Spurs defence who, by now, are starting to daydream about getting back on the bus. The partnership between Miedema and Foord is at its best in this example.

Malin Gut has her role to play in the goal too, it’s her driving run forward from the centre circle that starts the move as she powers towards the area. 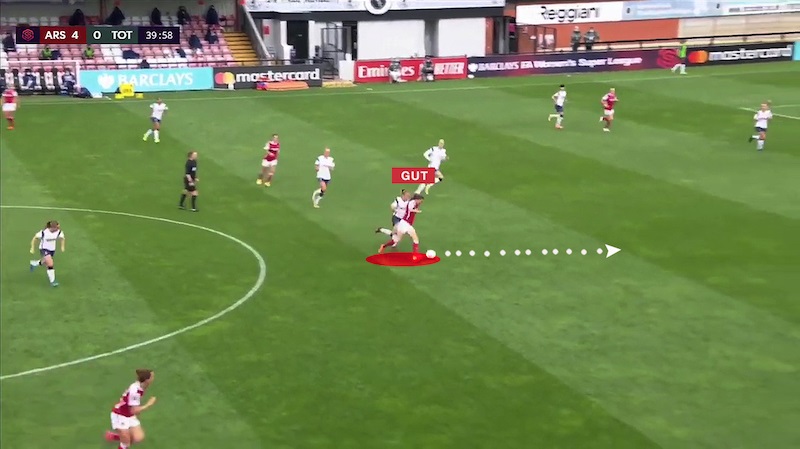 Miedema comes away from the front line and Foord stays in the area as Gut brings the ball. Yet again, Harrop is attracted in-field to track Miedema leaving an ocean of space behind her. Schnaderbeck could just as easily receive the pass in this example, but Foord spots the space behind Harrop and runs into it. 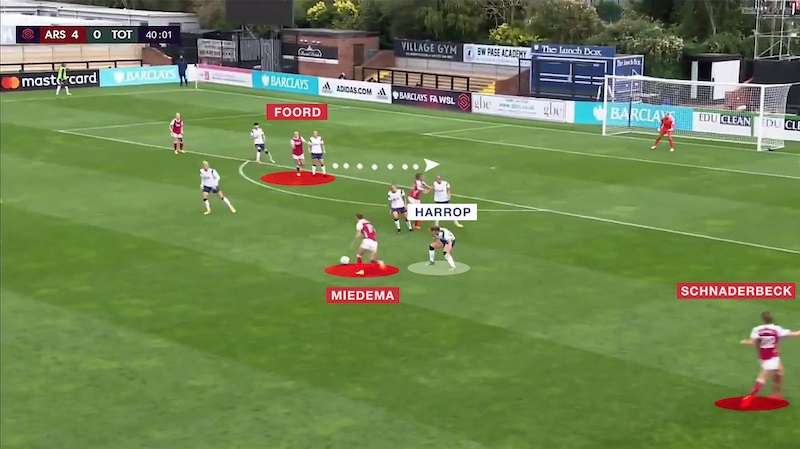 Once Miedema plays the ball to Foord, Filbey, Kennedy and Percival all stop but Miedema carries on her run. Caitlin must hear Viv shout because she unselfishly squares to the number 11 for her hat-trick. 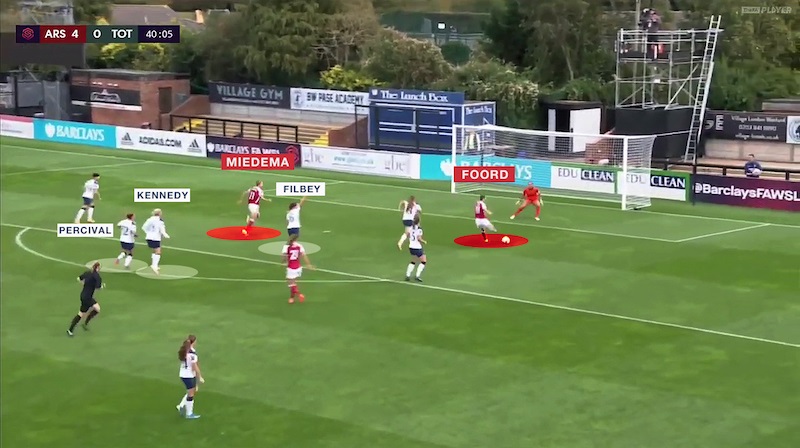 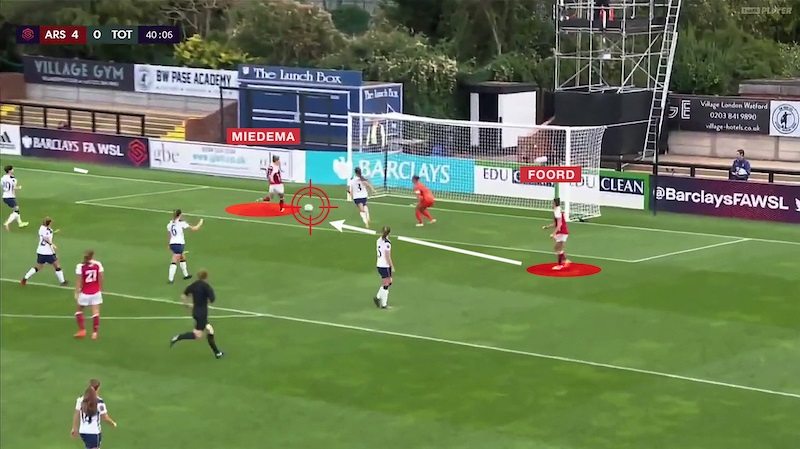 It's a hat-trick for @VivianneMiedema! 😅@ArsenalWFC are now 5-0 up in the first half…#BarclaysFAWSL #NLD pic.twitter.com/LlNOCqa6zt

Once again, this goal owes plenty to the understanding between Miedema and Foord. Ashleigh Neville miscontrols a McCabe throw and Foord and Miedema are totally alive to the situation. She plays the ball first-time to Miedema from the turnover and Spurs are on the back foot. 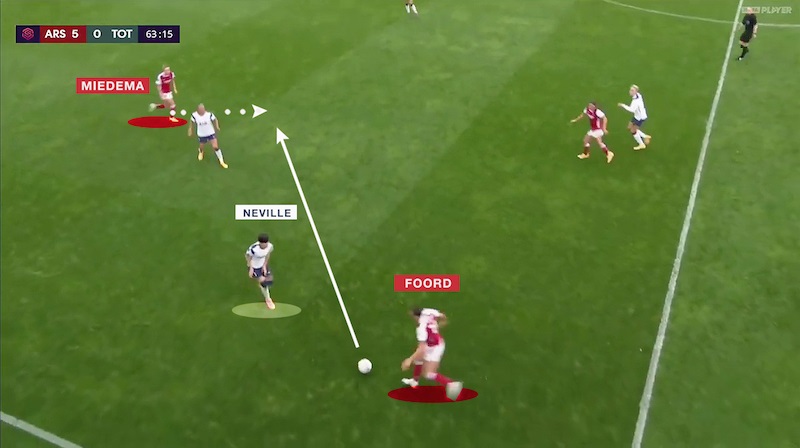 The front three of Mead, Miedema and Foord are in their expected positions as Miedema sizes up the pass to Mead on the right-hand side. It’s what happens next that is interesting. 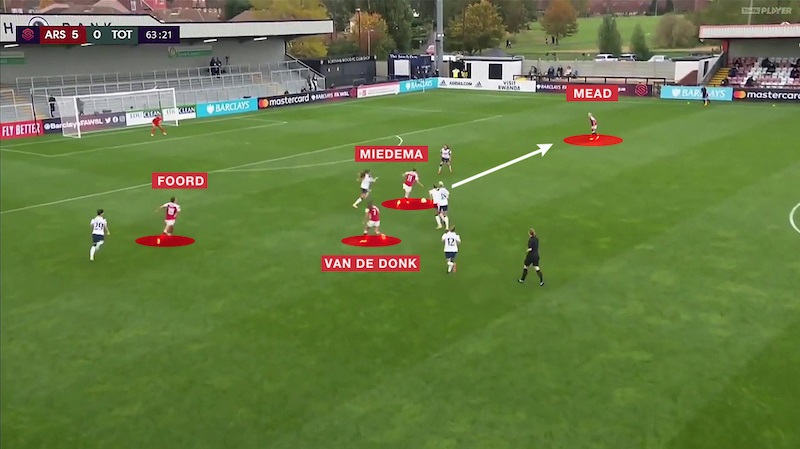 As Miedema plays the pass, she immediately retreats to the edge of the area in case of a pull-back option, while Foord attacks the six-yard area. 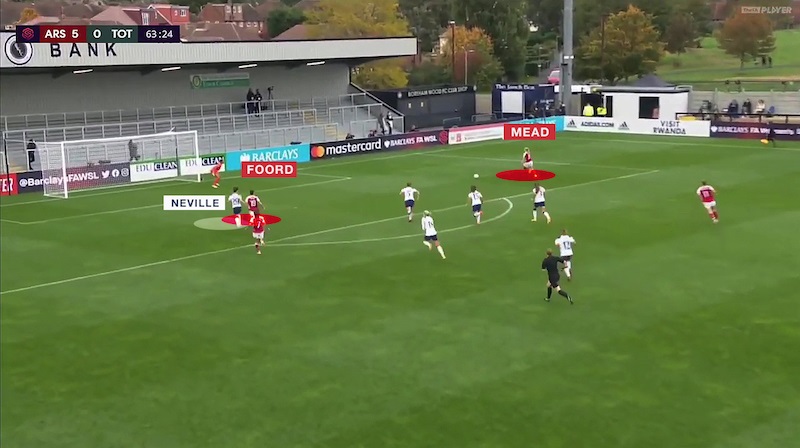 Neville tracks Foord’s run well enough but Caitlin just halts her run at the edge of the six-yard box by slightly pulling to the right, allowing Neville’s momentum to take her towards her goal-line. This creates a half-a-yard for Foord and gives Mead an avenue to pick her out. It proves to make all the difference, with the Australian forcing the ball over the line via a ricochet off Neville. 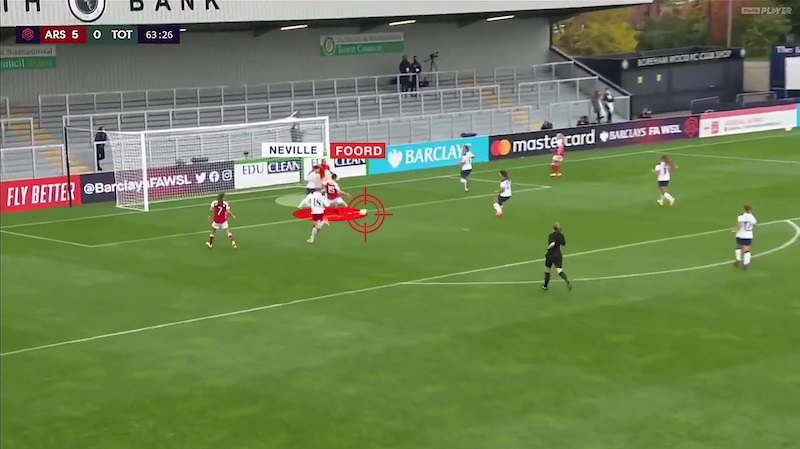 It's 6⃣!@CaitlinFoord gets her second for @ArsenalWFC #BarclaysFAWSL #NLD pic.twitter.com/XGFsgpxlkU

Previous articleManchester City 1-0 Arsenal: By The Visuals
Next articleMertesacker loving his role as Academy manager

Can we just take a second to acknowledge the awesomeness of Miedema! GOAT!

Thanks for the breakdown. The movement and understanding of this team is just beautiful to watch. COYG!

Not so much a team as a single organism.

I thought Viki was good too as a makeshift attacking right back so deserves a mention. She was the one brought down for Katie’s super curling free kick which knocked the stuffing out of the visitors within minutes of kick off.

She also played as a left back in the later stages. Malin Gut and Viki were my secret women of the match. But they all performed very very well. DVD did even the tackle of the game on the right side. Tremendous performance 😉

Thanks again, Tim, for bringing the match to us.

Thank you Tim! Great thing. Keep it up.
Up The Arsenal!

Wow, this is really helping my understanding of what Montemurro means when he says that e.g. Miedema’s movement off the ball is often so important.

Hi, I am interested in a 2021 Arsenal Women’s calendar – i support the team and don’t know how else to inquire 🙂

What’s going on with arsenal women this season. Everywhere is red

A is for Arsenal

I love the level of detail provided on the women’s team on the site. Can I make a friendly suggestion on this type of analysis? Much of it is a written description of what everyone can see – where it becomes really insightful is looking for the non-obvious tactical and technical insight. Please don’t all hate me for this, I am trying to be constructive.

And yet women’s football is still treated like a minority sport by the media. Even WSL matches are hidden away on the BBC red button channel so they’re not easy to find and there’s scarcely any reporting in the newspapers on women’s matches. The FA player channel is brilliant but I can’t get it on my TV.

You could get it on your PC though!