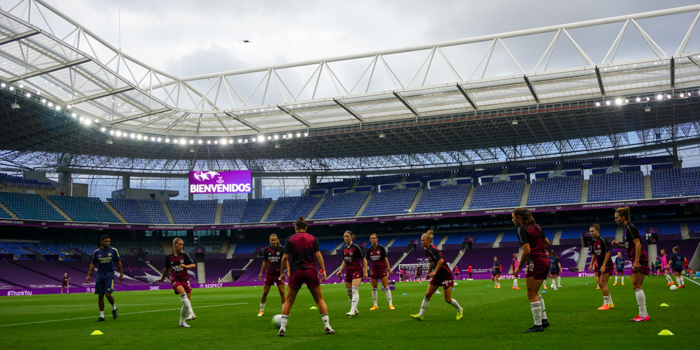 For the next couple of weeks, I am going to trial a new series of articles and see whether people enjoy them. I will produce a tactical breakdown of the goals Arsenal Women score [assuming they score of course!] in each of their WSL games. Starting with this weekend’s 3-1 win over Bristol City. Forgive the slightly crude Microsoft Paint graphics, if these prove to be popular I’ll look at a way of making the graphic element a little more professional!

Arsenal’s equaliser is a nice marriage of the patience of Lia Wälti, the relentlessness of Jordan Nobbs and the movement of the three forwards. Just before the move that leads to her goal, Jordan [circled] tries to set Caitlin Foord free down the left-hand side.

It doesn’t quite work, the ball is intercepted and is worked back to Lia Wälti. Unperturbed by the pass that doesn’t quite come off seconds later, Jordan has again moved into space and demands the pass from Wälti.

Wälti doesn’t like the angle of the pass, turns away and plays a one-two with McCabe on the left touchline. Lia’s patience pays off and she can see Cailtin Foord making a run down the left-hand side and this time the Swiss midfielder does release the pass. Nobbs doesn’t stand on ceremony having not received the pass the first time and has stayed in the half-space.

Wälti sets Foord away on the left and when the Australian looks up she has four options in the box and this sort of movement is drilled again and again in training. Miedema and Mead [circled in red] run towards the front and back posts, taking a host of Bristol City defenders with them. There is a second line of attack ten yards behind them, with van de Donk and Nobbs [in yellow] waiting for the cut back. The runs of Miedema and Mead have cleared a space for either Jordan or Daan to take the shot. 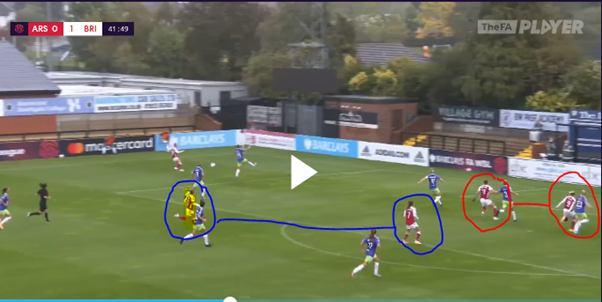 Jordan [in yellow] makes the late run unobstructed thanks to the movement of Mead and Miedema and smashes the ball into the corner first time. Montemurro talked about his team’s patience after the match and this is what he meant. Jordan didn’t get disheartened not to receive the pass from Wälti a few seconds earlier, Foord didn’t get disheartened when the pass from Jordan didn’t come off first time and Mead and Miedema’s movement cleared the path for Nobbs to finish.

Jordan Nobbs: ? of one touch worldies.pic.twitter.com/1hDceqZPK0

Nobbs takes charge for Caitlin Foord’s goal that puts Arsenal ahead. On this occasion, Jordan returns Caitlin’s favour for the equaliser by teeing the Australian up with a cross of her own.

Again, the move requires patience before it comes to fruition. Look at this still at the beginning of the move. Viki Schnaderbeck has the ball on the right flank with options in the area. But Nobbs [circled] is instructing Schnaderbeck to go back to Lia Wälti to start the move again, rather than throwing a hopeful cross into a crowded box. Schnaderbeck does so, going back to Wälti. 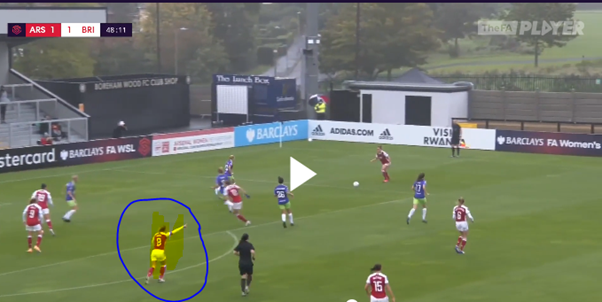 Arsenal eventually win a throw in and the ball is worked to Nobbs on the corner of the Bristol area. However, Jordan can, again, see the angle is not favourable for a cross and she decides to go back again to Wälti. Arsenal do this often under Joe Montemurro, they are not afraid to go backwards to go forwards. 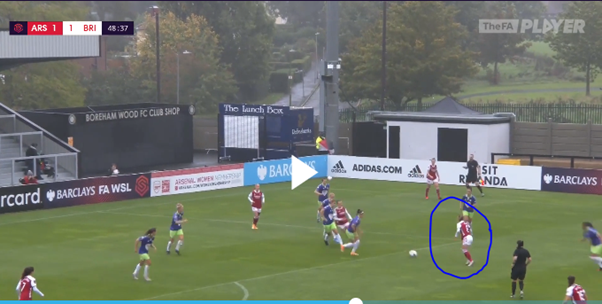 The ball is worked back towards the edge of the box, where Nobbs and Wälti play a one-two. Now Jordan senses the moment is right to cross. Look at how their patience has attracted four Bristol defenders away from the six yard box, which creates space for Caitlin Foord to latch onto the delivery. 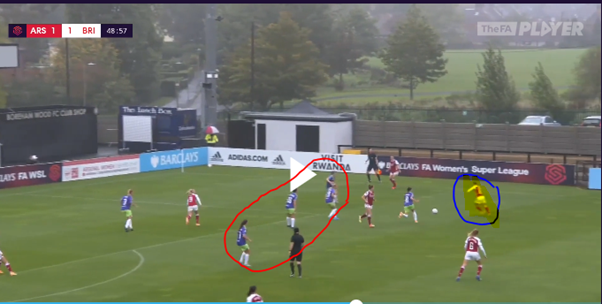 The patient approach has cleared a big space in the Bristol area [in yellow] and now Jordan’s cross only has to evade one Vixens defender, which it surely does and Foord is left with a tap-in. 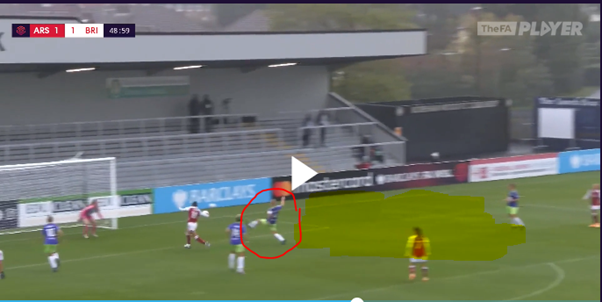 The Gunners are quick out of the blocks! ⚡️@CaitlinFoord puts @ArsenalWFC 2-1 up! #BarclaysFAWSL pic.twitter.com/osxftdhC0k

The third goal is simpler to break down. 2-1 down with five minutes to go, Bristol have to commit players forward. Arsenal are still dominating possession but when Katie McCabe is forced to shepherd a loose ball back to Zinsberger, Bristol are invited on to press the ball in search of a late equaliser. 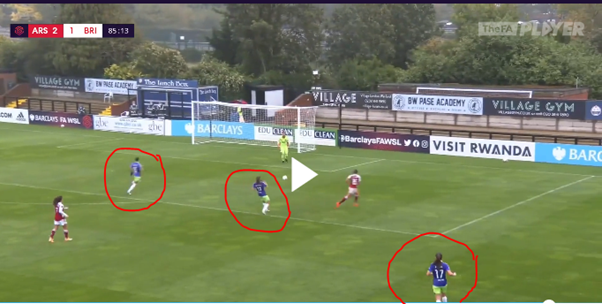 Zinsberger’s lofted clearance is contested and drops to Beth Mead inside her own half, with Bristol attracted forward, she quickly appreciates that Vivianne Miedema has space to run into and there’s only one course of action when that’s the case. Much like her first-time, snapped pass to Jordan Nobbs for her goal against Manchester City on Thursday night, Beth thinks quickly and stabs a perfectly weighted, lofted pass into the space for Miedema to run onto.

It’s the only time in the match that Miedema has space to work with and there is only one outcome when she has this kind of a run on a defence. The finish is absolutely ice cool, so nonchalant in fact that she slightly catches Sophie Baggeley off-guard in the Bristol goal. Miedema just stabs the ball without ever really shaping her body to shoot and giving the Vixens goalie a chance to anticipate the finish.

Miedema just toe-pokes the ball into the far corner without breaking stride and seals the points for Arsenal.

Love it. Thanks for the insight.

This was interesting, thanks Tim!

Great work, Tim.
That Viv goal was cheeky and a beauty.
Great way to come back from the fa cup mishap.

I’ll be looking forward to more of this. Thanks! You’ll have a lot to breakdown when the team scores half a dozen or more.

thanks Tim, I would love for more articles like this! I’m relatively new to soccer, never having played myself, and this sort of play by play breakdown really helps me appreciate the game even better 🙂 minor suggestion for improvement if you keep doing these – post a video which covers all of the moves you describe (right now for the first goal it does but for the latter two the videos start later than your explanation). Thank you for making high quality journalism available for the women’s game!

Another detail to note post-Nobbs goal, DVD has presence of mind to go retrieve the ball rather than join in the celebration. Goes to show that Arsenal weren’t satisfied to just be tied with 2 mins left in the half – she wanted to hurry up and see if they could get a go-ahead goal.

Yes, I clocked this too- she points at the ball immediately and then goes to get it.

Just wanna let you know that I love this!

I think a game like this (with lots of possession and a very defending team against you) is very interesting to break down like this. Where plenty of people will scream they need to be pushing more, it shows the deeper thought behind playing the game.

I had a feeling you wanted to write this since the beginning of the season, but decided to do it now because they scored too many goals against Reading and West Ham…

Thoroughly enjoyed this with that being said!

A ‘yes’ from me Tim.
Totally, unrelated to this content….a plea to all AFC & AWFC supporters “SAVE GUNNERSAURUS”

Appreciate these insights Tim – thank you!

Amazing! Looking forward to more of this. It’s a great way to appreciate the thorough technical approach of our coach and players.

And it’s a thumbs up from me too! Thanks for adding this analysis to the women’s section Tim. Quite happy with the graphics; they do their job.

Still think Bristol are the Robins and not the Vixens ?.