THE LOWDOWN
Arsenal face Tottenham Hotspur in the WSL on Sunday afternoon aiming to maintain their perfect start to the league season ahead of the October international break. The Gunners’ next two league matches are away at Manchester United and at home to Chelsea, maintaining their perfect record is paramount heading into a defining part of the season.

Montemurro’s side had to wait 70 minutes to break Tottenham down in their recent 4-0 win over their North London neighbours in the FA Cup and in the previous meeting of the sides, last November, they were made to wait 67 minutes before breaking the deadlock. Patience will again be the by-word for Arsenal against a Spurs side that will look to sit deep and frustrate.

There will be little room for Montemurro to rotate his side with seven first team players nursing injuries- a situation that Joe Montemurro told Arseblog News had sparked “a massive internal review” on Wednesday. An international break will immediately follow this match and Arsenal won’t have a game for two-and-a-half weeks.

A lot of players will go off to play with their countries, of course, but the 31st October / 1st November will be a free weekend due to the FA Cup Final between Manchester City and Everton. Arsenal have averaged over four goals a game in their first four WSL games so far this season and with an average score of 22-0 over Spurs in their last four meetings, another comfortable victory will be expected.

TEAM NEWS
Noelle Maritz will miss the next six weeks with a knee injury, while Jordan Nobbs [hamstring], Steph Catley [calf], Jill Roord [knee] and Lisa Evans [calf] won’t return until after the international break. Lydia Williams returns from an ankle injury but fellow goalkeeper Fran Stenson is now out with a thumb injury. Kim Little has trained this week and should be fit to return from a minor hamstring problem. Leonie Maier has pulled out of the Germany squad for their friendly against England next week due to a knock on the thigh that forced her out of the Brighton match last weekend, so her participation has to be in doubt too.

LAST TIME OUT
Arsenal were 4-0 victors over Spurs in the FA Cup just three weeks ago thanks to a wonder goal from Jordan Nobbs and a hat-trick from Lisa Evans.

PLAYER TO WATCH
Lia Wälti gave a midfield clinic against Brighton last weekend. With Kim Little, Jordan Nobbs and Jill Roord unavailable, there was extra onus on Wälti to produce. The Swiss midfielder grew up with a fondness for skiing and ice-skating in her native Switzerland and it shows with her ability to swerve away from pressure.

Lia is comfortable playing with both feet and this constantly opens up new angles for her to build play from the number six position. Wälti is able to choose the best pass and not just the easiest pass with her strongest foot- a foible that spoils too many potential attacks in elite level football. Wälti’s “snake hips” nickname is immediately self-evident when you watch her play. 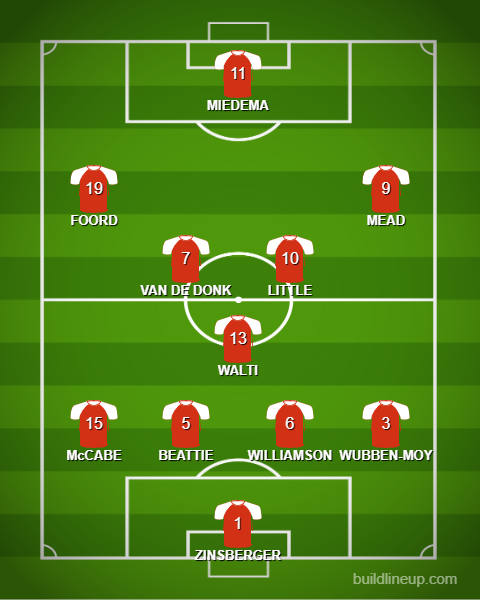 THE OPPOSITION
Tottenham narrowly lost 1-0 at home to Manchester United last weekend, foiling Casey Stoney’s side for large segments of the game. They have successfully frustrated Arsenal for long periods in their two previous meetings too but, as they did against United, Spurs squandered opportunities at 0-0 that might have changed the course of the game.

Alex Morgan has yet to make her Spurs debut having not played for 14 months following the birth of her daughter in April. Morgan might make the bench for this match and if they can keep the game tight until the last third again, they will be very tempted to bring her on. If Spurs can create a chance at 0-0 and it falls to Morgan, it is unlikely to be squandered.

"We're moving in the right direction, the girls just have to believe in themselves a little bit more."

HOW TO CATCH THE GAME
The game kicks off at 2.30pm on Sunday at Meadow Park. It will be shown on BT Sport in the UK, NBCSN in the US, Optus in Australia, Sportsnet in Canada, Ata Football in Italy and Germany, Sky Mexico in Central America and Viasat in Scandinavia and Finland. Everywhere else, it is available on the FA Player app free of charge.

COMING UP
We will have match reaction from Joe Montemurro on the site on Sunday afternoon and, assuming Arsenal score, a breakdown of their goals on Monday evening. We have content planned for the international break with a player analysis profile, an exclusive player interview and another Arsenal Women Arsecast.

We should have a psychological advantage over Spurs considering our performance against them; I do worry about our goalkeeper though. I have not overly convinced with her this season.

Thanks, Tim
With all our missing players, this is probably Spurs best chance so far. I don’t think we will keep a clean sheet, but we will outscore them.

Well Viv has a hat-trick, is now WSL all time record goal scorer and it’s already 5:0 and only half time!