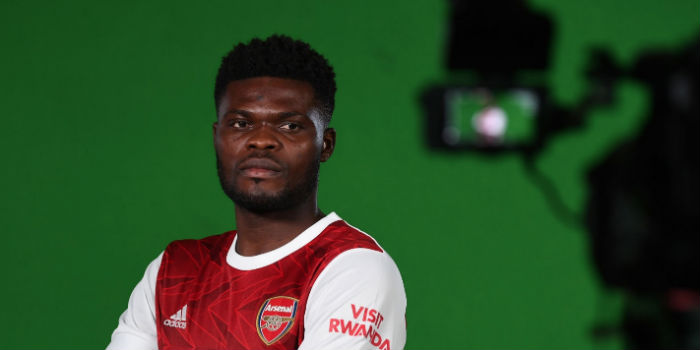 Mikel Arteta admits Arsenal were very short of options in the centre of midfield by the time they made their move for Thomas Partey.

After sanctioning loan moves for Matteo Guendouzi and Lucas Torreira, it looked like the Gunners might try and get through until January with just Granit Xhaka, Dani Ceballos, Mohamed Elneny and Joe Willock as viable central midfield options.

It wasn’t until very late on deadline day that the club decided to trigger the Ghanaian’s release clause and, in the blink of an eye, we swapped €50 million for the 27-year-old.

Only after he’d signed did we find out that Arsenal had tracked the player for a couple of years and that personal terms had been agreed well in advance.

Having called for the club’s owners to be bold in the transfer market, Arteta is quite obviously pleased to recruit a player of Partey’s profile.

Facing the media ahead of Saturday’s trip to Manchester City, he said: “We need a balance between a lot of young players that we have in some breakthrough and development phases and others who are at the peak or twilight of their career.

“We believe that he [Partey] was the right recruitment for us in terms of age and his history, his career, where he’s been educated, the amount of experience he has, the quality he has to adapt to our game and to this very competitive league that we are involved in.

“As well, because of the numbers. We were very short in midfield and we needed to strengthen there.”

He added: “I think he’s going to give us a bit more versatility in our way of playing. He can play in two or three positions as well when we’re able to change formations or game plans against certain opponents. At the moment, I think he gives us something that we don’t have in the team.”

While Partey insists he doesn’t feel under any pressure, the club’s big financial outlay will inevitably mean his early performances are closely scrutinised. Arteta believes the new man has the pedigree to deliver but he may need a small window to settle in his new surroundings.

“There’s a lot of expectations but we have to give some time to players to adapt,” said the boss.

“The Spanish league and the English league are completely different. The style of play between Atletico Madrid and us, there are some big differences there as well.

“What is unquestionable is the quality of the player, the level he’s been playing at for the last five to six years. That will obviously be a big help. If he has the support of all the coaching staff, the players and the fans, which I can see he does, then the adaptation will be quick.”

Having said he’d give the midfielder a couple of training sessions to get to know his new teammates, Arteta now has to decide if Partey makes the travelling squad for tomorrow’s game with Manchester City. Not a bad place to make your debut…

Start him tomorrow. They will not have KDB as he is out with injury. For the first time in a long time we may have the opportunity to be stronger in the midfield when compared to City – Partey, Ceballos and one of Xhaka/Elneny should give us solidity defensively but also the drive and zip to not solely rely on counterattacks.

Let’s see what happens – I am excited for tomorrow and for the future in general.

Let win it again tomorrow and have another party.

Is it just me or are the cheesy partey/party jokes getting a bit annoying now??

You sound fun at Parteys ?

Var Will Solve The Problem
Reply to  Poopy pants

My head says don’t start him but my heart wants him to start. Reading between the lines, seems like the boss will choose the former.

Partey or no Partey, im excited as well for tomorrow. Couldn’t wait for this Interlull to be over with! Also, this is probably the first time it feels like City just might be the underdog under Pep against Arsenal. (Not trying to jinx it …)

Sunny
Reply to  Var Will Solve The Problem

I’m hoping Partey starts as well but the fact that he joined the squad so late makes me thinks he’ll only make the bench.

But here’s hoping he starts off the same as Gabriel.

I tell you my brother, this midfield combo is going to be one of the toughest to contend with. If this midfield performs optimally every match we will go a long way. I’ve never been this confident in our team for this long.

Sorry just realised that’s 12 players (I’ve had beer and lost the ability to count. Something like this with Auba down the middle and Willian as number 10

12 players in our team sounds fair to me. The ref will probably be on City’s side, so thats 12 on each side ?

Luiz should be in there cus of the experience

I’d have Pepe rather than Willian – otherwise, I agree.

Not sure why I got down voted so badly, I’m sure Arteta will stick with a back 3.

Is it just me, or does Partey look like the scariest player we’ve had in the squad for years. He looks like he won’t take any shit (but might just bite your legs)

I would say Vermaelen and Sokratis looks more menacing when we signed them.

Lauren and Keown looked pretty hard. I wouldn’t call either if them a prat in a dark alley.

The hardest bastard to ever pull on an Arsenal shirt.

At that time, in the late 60’s and early 70’s, even Chelsea’s Ron ‘Chopper’ Harris and Leeds Utd’s Hunter, Giles and Bremner all respected Storey.

Graeme Souness, Vinnie Jones, Roy Keane – Pete would have had them all in toast, had he played against them.

Partey must start tomorrow. He’s match-fit and rearing to go.

I want us to be more aggressive than against Liverpool. City’s big weakness is their defence: let’s get in there and score a few goals. Pep’s boys look vulnerable at the moment and we have to take advantage.

Damn fatgooner, I can finally give you a thumbs up

He may get a chance for a run out against City. It will be a tough debut if he does as we’ll do well to get a point I think. Overall, it will be a second chance for the players to see if they’re beginning to close the gap with the top teams in the PL (cup competitions are different scenarios). It wasn’t too encouraging against Liverpool as we know, but still early days of course.

I will play a 352 to overload the midfield and play auba and pepe upfront to run at them.
Luiz, Gabriel Tierney; Saka bellerin, xhaka Ceballos partey
I think this team will trouble City today. But then, what do I know

I hope we give them problems. There have been some surprising results in the PL so far and perhaps we can “do a Villa” and give one of the top teams a real fright. Although we’d love to take all the points against City, realistically I suspect Arteta will be quite happy sharing them though.

Pep seems to be repeating the same first big error of judgement that Arsene made post invincibles – disregarding the importance of physicality and defensive work rate in his players He’s stubbornly chasing this pure, expressive, technique based style of play that doesn’t really exist. Meanwhile his players are struggling to even get close enough to opposition counter attacks to commit their tactical fouls Their technical abilities and passing patterns will still carry them through against most sides. But if their attacking stars have a slight off day against an organised team with a decent counter attack, they’re stuffed Pep’s… Read more »

Arsenals problem most of the time against superior opponents is that they respect them too much.. Arsenal needs to focus more on themselves at times and play their own game rather than make it all about your opponents.

With Partey, it’s going to change gradually. Partey is a tough guy,our own Yaya Toure.

Yes, that’s a fair point. Generally, we have a very poor PL record against the top teams, better recently at home, but truely terrible away. It goes back to about midway through Wenger’s tenure and got increasingly worse (can we forget the regular thumpings we got in his latter years?) as we fell further behind. It’s confidence to a degree, but in Wenger’s time it was also down to lack of overall quality as well, particularly in defence, and the lack of real “leaders” on the pitch. Arteta is certainly addressing the former and there are signs of improvement in… Read more »

We will enjoy Partey.

Here’s to us finally being able to have a go at teams within a team that can compete ?

Without Ozil this team has no creative player kindly add ozil in your Mr.Arteta

???? It’s too late pal. The ship has sailed. And don’t expect Artetato back down now and include Ozil in the Premiership squad. He won’t. What we now have is a fucking Panto – aka ‘The Fucking Great Gaping Arsenal Midfield Creativity Black Hole’ that is going to give the tabloid journalists and those twats on TalkSport miles and miles of mirthful copy for the rest of the season. Still, there you go. Every seven days another £350k is eaten out of the coffers for Mesut Ozil to do a few stretches, do some flicks and keepy-uppies, have a luagh… Read more »