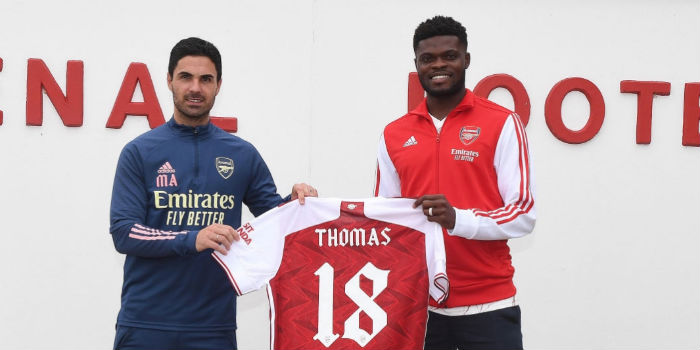 Mikel Arteta says he’s waiting to see how Thomas Partey performs in training in the next couple of days before he decides what part the new midfielder will play against Manchester City.

The €50 million deadline day signing only arrived in London on Wednesday following two games for Ghana and still hasn’t met some of his teammates with other players only just returning from international fixtures of their own.

Given the circumstances, it seems most likely that Partey will start on the bench at the Etihad but Arteta isn’t ruling anything out.

Facing the press on Thursday morning, he said: “Well he was here just yesterday, he is getting familiar with everything around the club. Today he will have his first training session, so everything has to come really quickly for him. We knew that before we signed him that he is fit, he is very willing to start playing and we will see how he goes in the next few days.”

He went on to add: “He needs to do a training session today first. We’ll see how he goes in the next 48 hours and then we’ll make a decision as to whether he plays or not.”

A long-term target, the Gunners left it very late to trigger Partey’s release clause. The excitement amongst the fans has been palpable ever since.

“I have seen the buzz around the place,” reflected Arteta, “the fans are really happy, I have seen some really positive reactions after we bought him, the same with the team, the squad and the staff. I think he is a player we had the radar on for a long time and we have managed to bring him in and I think he will be a really important addition to the team.

“He got to know some of his team-mates [already]. Not all of them, because some are still on international duty but we will have everyone back today and it will be a good day for him to get to know everyone.”

All eyes are now on Partey’s ability to adapt to England and the Premier League. While some players hit the ground running others have taken six months to consolidate a place in the team. Arteta says it’s hard to second guess how his new man will cope.

“I think it is something very individual, depending on many factors,” said the boss.

“How they settle first of all here in the city with their family, whether they speak the language or not, whether their qualities fit the team and the Premier League more straight away or if they need some adaptation and some development in those areas.

“It is very particular, you see some players adapt really quickly and some others taking a long time.”

Well, I should fucking hope so.

Partey will set the ball rolling, he speaks English and physical so will adapt easily.

No kidding! He is willing to start playing! For a short while I wondered if a £260 000 per week player would accept to kick a ball for the club that paid him 50M €. What a relief!

Irrespective of Partey starting, I feel differently about facing ManC now as compared to when we faced them in last seasons FA Cup.

Seems like we have a chance of winning now

They are a wounded lion. They’d be smarting from the bites they got from the Foxes the last time around at the Etihad. Be that as it may, salt could still be rubbed on an injury. COYG!!!

They’ve the interlull to let the emotion die down. It won’t be easy, but I don’t think they’ll be rabid to tear us apart either.

The Partey pun would never go stale. It’ll get better with time, like wine.

Whenever he goes rampaging through the middle: “Choo. Choo. Motherfker”

I hope he plays, as an anchor in our midfield trio, using 4-3-3 system. Ceballos and Xhaka should thrive knowing they have an ”octopus” behind them to guard the defence. Would also surprise Pep, anyways chances for a victory are slim, it is an away game but the lack of fans in the stands and what Leicester did could be a blueprint for Mikel. Though Pep will not allow this to happen again. Tough game anyway you put it.

Or Arteta could have simply said, there is Aubameyang and there is a Pepe

I don’t get this whole start on the bench thing. He’s a fit senior player and we need to put our strongest team out against city to have any hope of a result. Play him.

The strongest team is one in which all players have a clear understanding of the system that the manager is playing and what is expected of them, so if Partey is not bedded into the structure of the team and the style of play that Arteta wants, it could be detrimental to start him. Hopefully a few training sessions will be enough to get him up to speed, but we can’t hold it against him or the manager if it isn’t.

I don’t get this whole ostracise your best creative midfielder whom you’re shelling out £350k a week for, but I digress. The Premiership is the fastest league in the world. Robert Pires spoke of how he sat out what would normally have been his debut; he was told by Wenger just to watch the speed of the game. So, I can understand to a degree why Partey may be on the bench for the City game. But, generally speaking, I wholeheartedly concur with your point – you should play your strongest team – especially against the top clubs in the… Read more »

I love your stance, Bro.

Is Arteta talking about another player who was bought for a fortune and has not performed for us with on way too many occasions? Does Partey already speak the lingo…

Partey is built for this league, no fear.

It’s about far more than just his physical fitness (which I assume is fine). Is his mind fully focussed, or is he still settling into his new surroundings (house hunting, looking for schools, etc.) Also, has he fully understood what Mikel wants of him yet – don’t forget that the vast majority of this squad couldn’t do it under Emery, but function much better under MA. Finally, has he connected with his team mates yet? Does he know what runs they’re likely to make? Do they know what sort of pass to expect – and where? I’m happy to let… Read more »

One of the advantages Thomas has must be the language, as Ghanas native tongue, apart from African dialects, is English. They also
learn French in most schools, but hearing his interview, one could also reckon out that hes probably quite good at Spanish,too. I personally think that it´s a large barrier that has to be tackled when you`re not familiar with the local . Looking forward to seeing him do his thing!