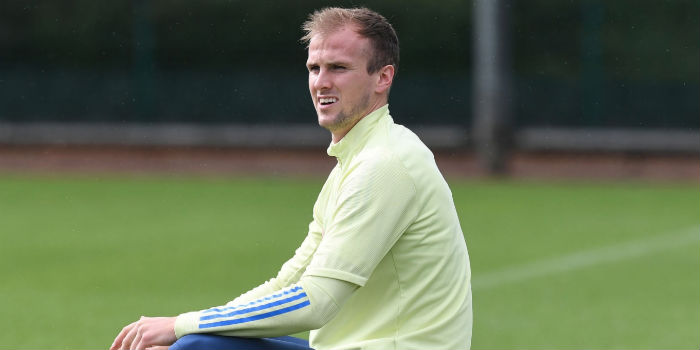 Mikel Arteta has confirmed that Rob Holding sat out this evening’s defeat to Manchester City because of a hamstring problem.

The centre-back had been selected to start the match at the Etihad but was withdrawn before kick-off after picking up an issue in the warm-up.

David Luiz took his place in a three-man backline that also include Gabriel Magalhâes and Kieran Tierney.

“We don’t know [how bad it is],” said Arteta when asked about Holding’s situation.

“But it was bad enough to make the decision to get Rob out of the game and to get David in.

“David was really focused, he came on and I think he had a really good game.”

Following a two-week Interlull, the Gunners now have three games in quick succession. Europa League games against Rapid Vienna and Dundalk are sandwiched by a clash with Leicester.

Even a minor hamstring problem could see Holding, who up until this evening had featured in all our league games, ruled out until next month.

Get well soon Rob. And bring in Saliba! Oops. He’s not in our UEFA Cup list is he.

He’s under 21 but doesn’t qualify for the B list because he hasn’t been at the club for two whole seasons. To include him we would have needed to drop another player to put him in the A list, we were two short already so he was left out. It’s a pity as the draw was kind and he could have got games.

I’ve just got home.
I was gonna go for a mad bet…….arse and Newcastle to win……Fuck

I’m starting to feel that Rob is going to be one of those players who never reach the level they might due to one ill timed injury after another. Fingers crossed it’s minor, best of lu k Rob.

Surely this is just another part of Rob’s slow comeback. I’m amazed Hector has been on such a smooth increase in performance and looks great now.

Be afraid. Be very afraid.

Anyone know rough return date for Mari and Mustafi?
If Holding is out for long time does that mean we can recall Sokratis?

I think I know why Holding pulled his hamstring. I mean, what really happened. Here is an excerpt from an F.B.I. leak of papers recovered when Swiss authorities raided rooms at FIFA’s hotel conference in Zurich: [TITLE] The Laws of the Game: Special Rules Concerning Arsenal FC #3 AFC is not permitted to have adequate defensive cover. . . . 3.4 If AFC has the requisite number and quality when all first team players are fit, then injuries will occur to reduce the number of fit players for subsequent matches of all sanctioned competitions. New injuries to available defenders should… Read more »

Please don’t say “Days, not weeks.” I can’t take another one like this again.