The graphics in this article were provided by @miedemastuff who you can, and should, follow on twitter if you don’t already.

Arsenal dominated Brighton in the wide areas today and all four goals came from crosses in one respect or another, with two coming from corners.

Vivianne Miedema’s opener came as Arsenal worked a short corner between McCabe and van de Donk. Arsenal often play short corners under Montemurro and it’s because defences are less set if you slightly delay the delivery into the area. There is more prospect of a defender losing concentration or getting sucked towards the ball and that’s what happens here.

Look how the Brighton players have drifted towards their own goal line as McCabe lines up the cross and Miedema just tiptoes away from the crowd scene to the edge of the area, where the space is. She knows if Brighton only half-clear the cross, there is a good chance the ball will fall to her. 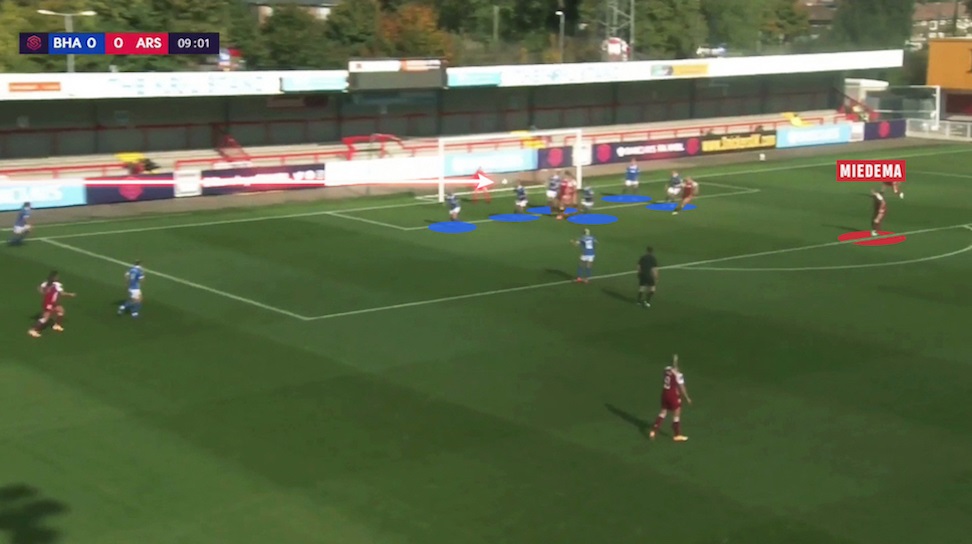 Brighton do clear it beyond where Miedema is lurking but Wälti is on hand to latch onto the clearance and poke it back towards Miedema- still in a decent position. 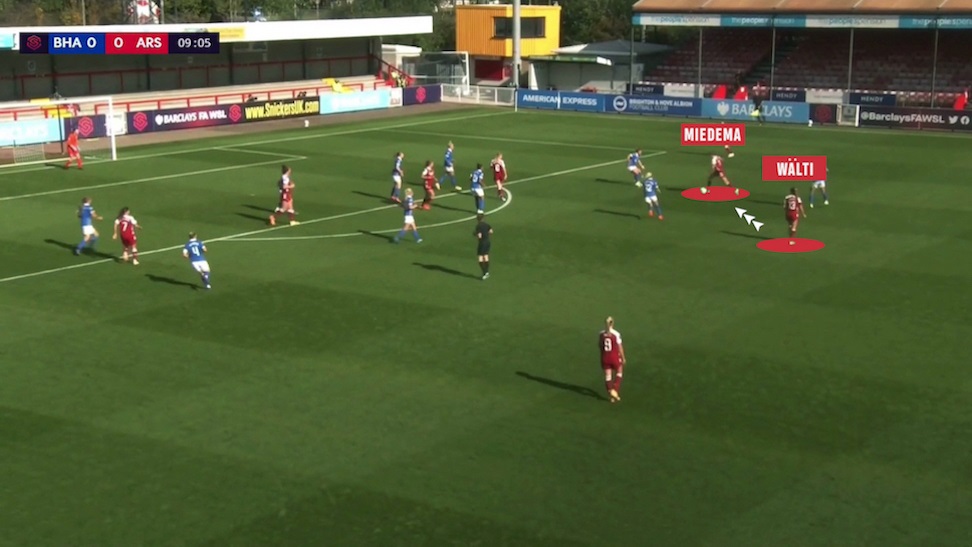 However, as much as Arsenal often score nice team goals with good patterns of play and off the ball movement, what happens next is really down to Miedema’s individual quality. She feints her way past Gibbons and that creates space for a shot. There is still plenty to do when she shoots and Brighton are not set up badly at all at this point. It is simply a brilliant shimmy and shot.

? @VivianneMiedema opens the scoring in Brighton!

Her sixth goal of the season ?#BarclaysFAWSL pic.twitter.com/wtNNdFtITM

It’s a smart shot too. When you look at the behind the goal camera angle, you can see that a shot across the goal is likely to be blocked by the Brighton defender closing down from Miedema’s left. The near post is where the gap is so that’s where she shoots. Miedema is able to make these calculations in micro-seconds and it’s what makes her an elite player. 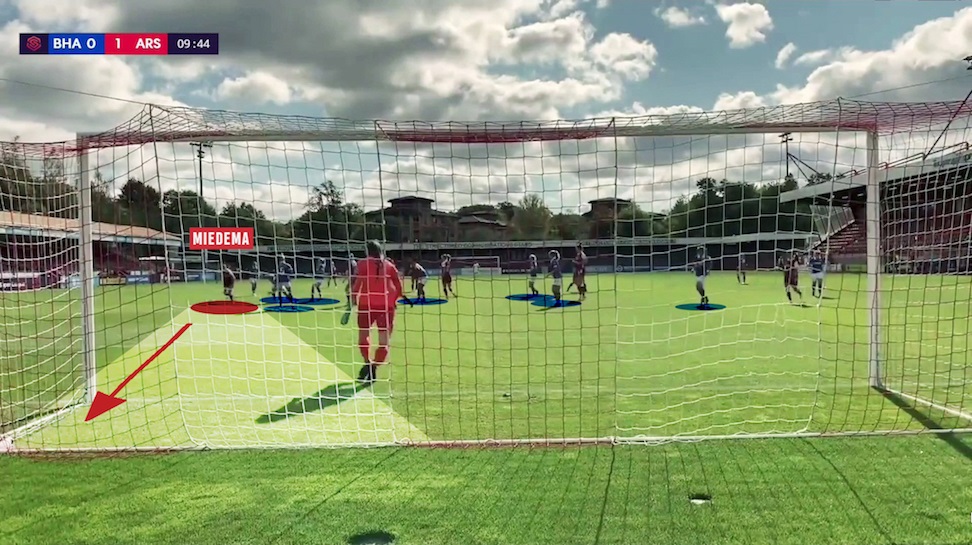 One of Arsenal’s great weapons under Joe Montemurro is the quick switch of play, being patient on one side of the pitch, attracting the opposition over before hitting them with a quick switch and that’s what happens with the second goal. McCabe, Wälti and Beattie set a trap for Brighton, playing the ball around in the left-back area. 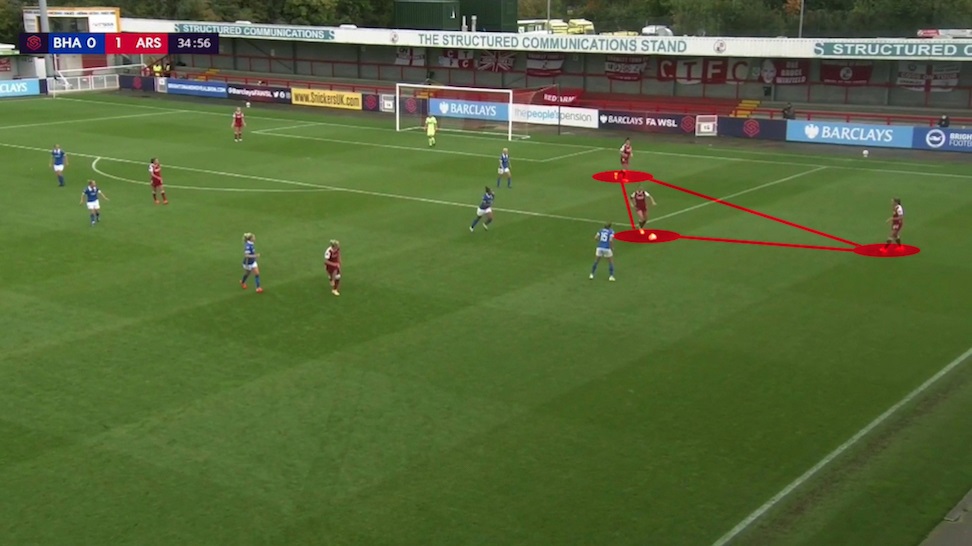 Eventually Beattie clears it down the line and the ball drops to Mead in the centre of the pitch. Look at the big space Arsenal have opened up between Brighton’s midfield, who have all been attracted forward and their defence. Within five seconds of looking hemmed in near the corner flag in their left-back area, Arsenal now have their attackers isolated against Brighton’s defenders and Mead is able to weave a pass to the right flank. 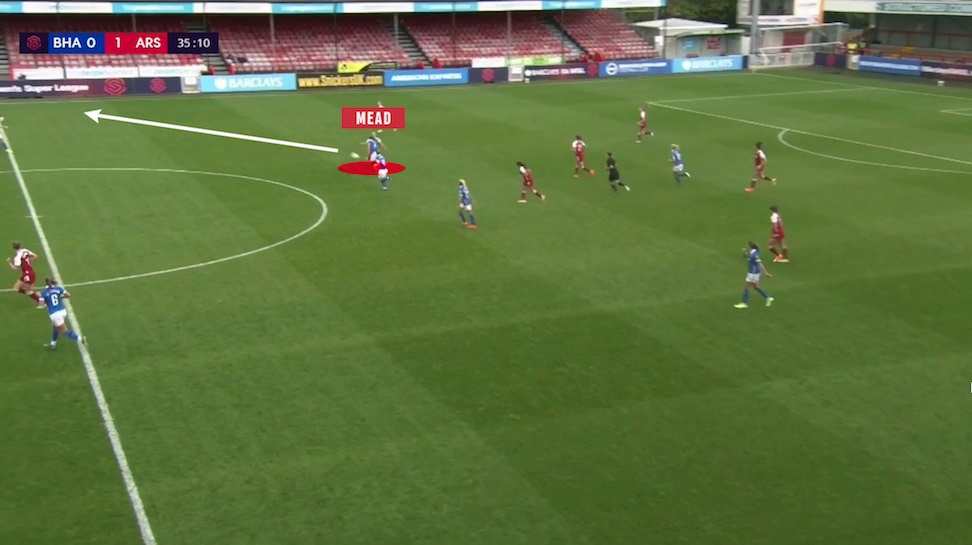 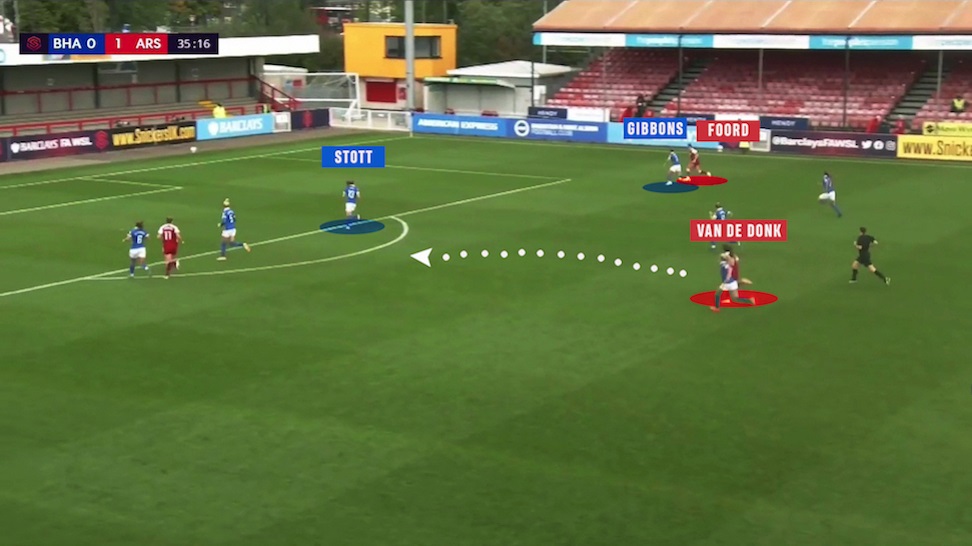 However, Denise O’Sullivan and Danielle Bowman have done a good job of keeping up with DvD and tracking her run, so van de Donk produces a clever piece of movement. She allows O’Sullvian and Bowman to keep running back towards their own goal, then she briefly stops and changes direction. Instead of continuing to run in a straight line, she zig zags towards the front post but stands off slightly too to make herself some space. 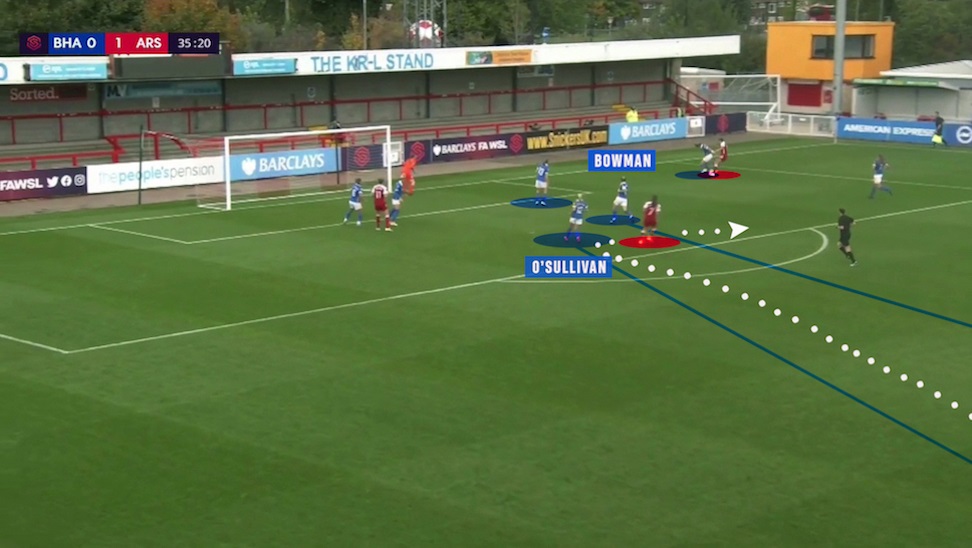 Foord beats Gibbons and by changing the angle of her run at the last second, van de Donk has made herself a crucial yard of space, which gives her just enough space and time to take a first time shot. She buys herself half a yard and half a second by zig zagging her run but that is all you need in the area. 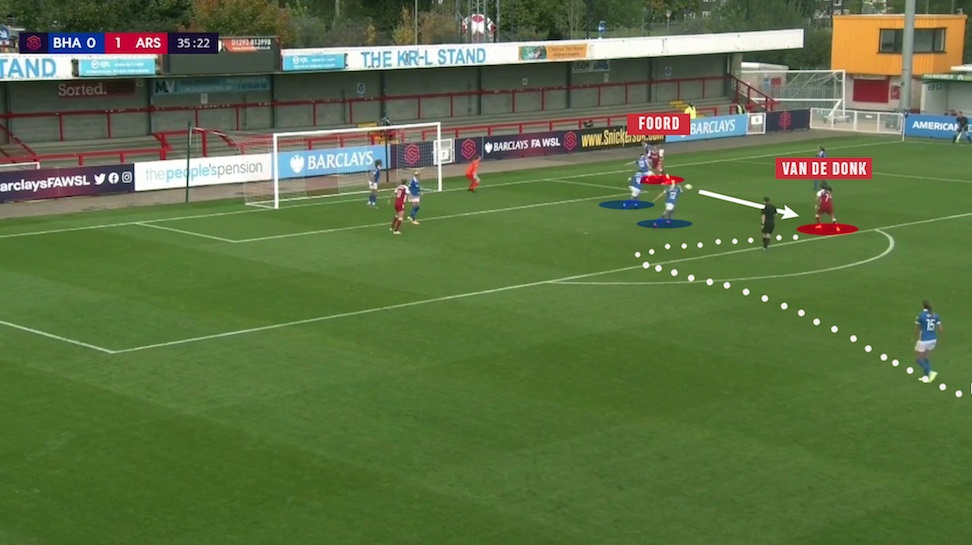 It’s not just the quality of the run but the speed of van de Donk’s decision making. Foord does excellently to both muscle and shimmy Gibbons out of the way. From behind the goal we can see that Bowman is very quick out to van de Donk but Daan has already seen the space she wants to shoot into and look at how she is already set for the shot well before the ball arrives. If she is anything less than rapid in her decision making, Bowman blocks the shot. 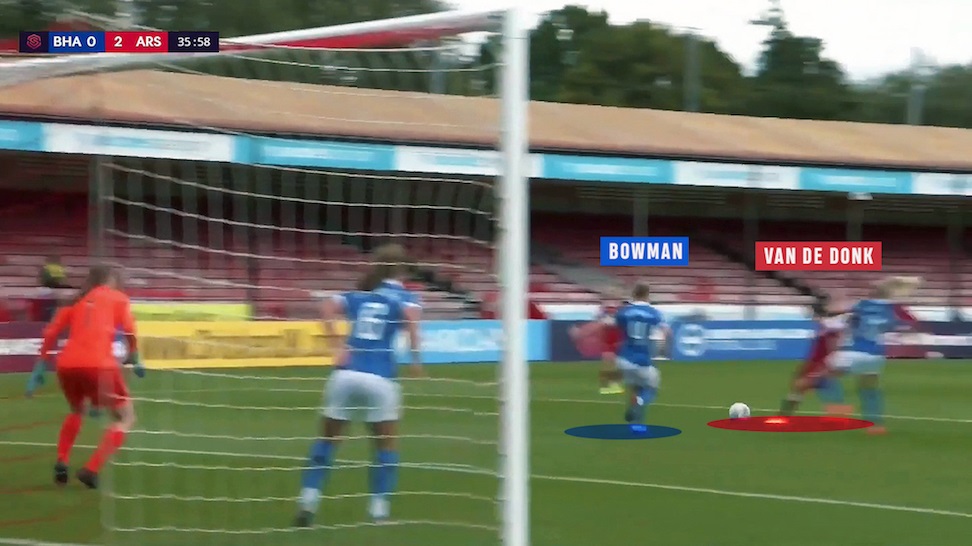 From an Arsenal perspective the third goal is from such a straight-forward setpiece routine that it doesn’t bear much analysis [Hope Powell will replay it to her defenders Clockwork Orange style all week]. Arsenal often opt for short corners and you can see that van de Donk has made that option available for McCabe, taking a Brighton defender away from the penalty area. 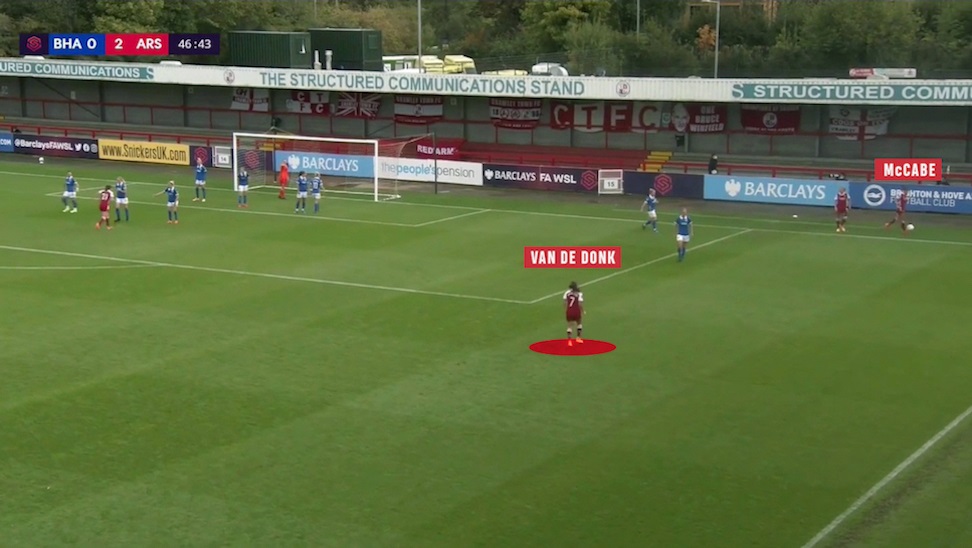 Brighton have opted for a zonal marking system from the corner and the ball simply floats into an empty space at the back post and Beattie reacts more quickly to the flight of the ball than the Brighton defenders. 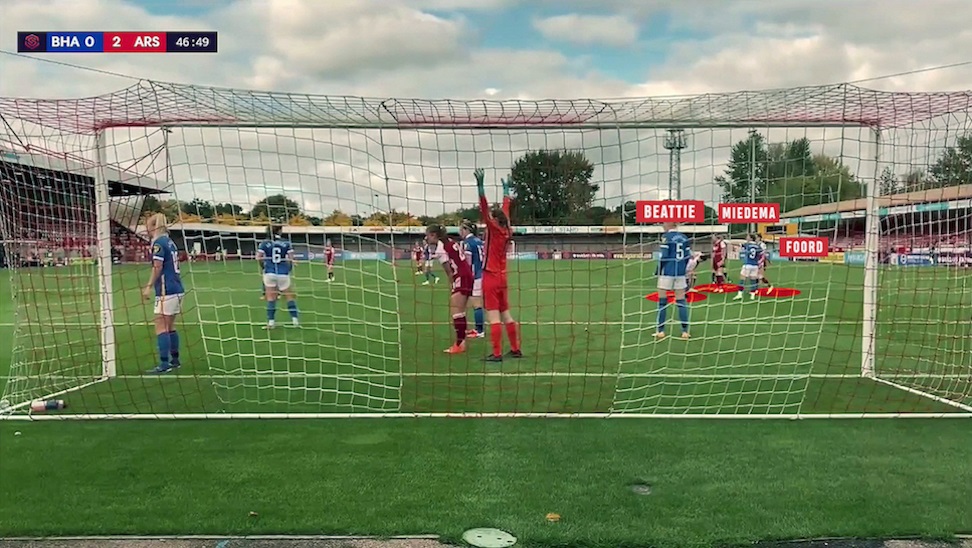 Foord and Miedema, who were next to Beattie as the corner was swung in, don’t fully follow the flight of the ball either. For Beattie, a centre-half who once played as a striker, her instincts were simply honed for this type of situation. The Brighton defenders in the middle zone, where Beattie runs from, have their backs to their own goal and have to turn and track Beattie, whereas the Gunners centre-half simply has to run forwards. 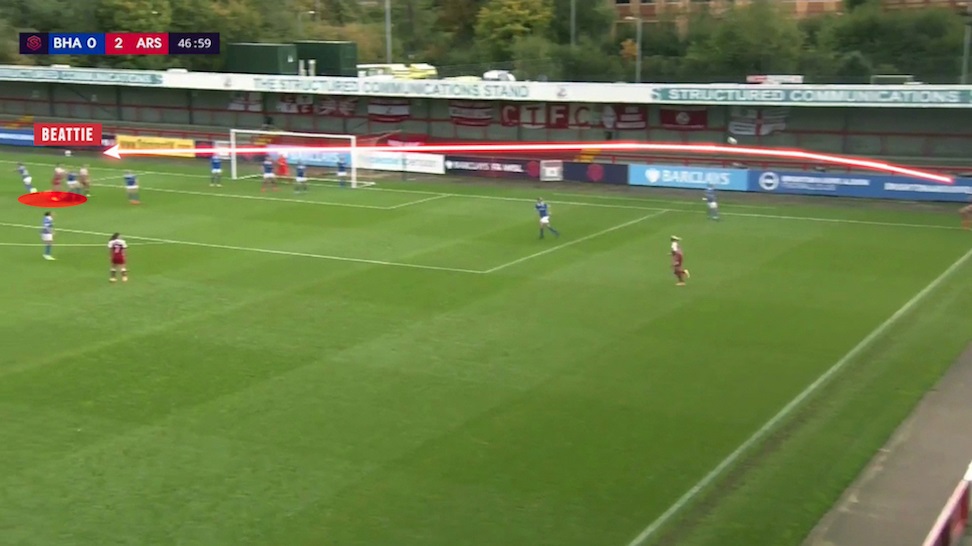 That half-second it takes the Brighton defenders to get turned costs them the goal as Beattie heads home from a difficult angle. 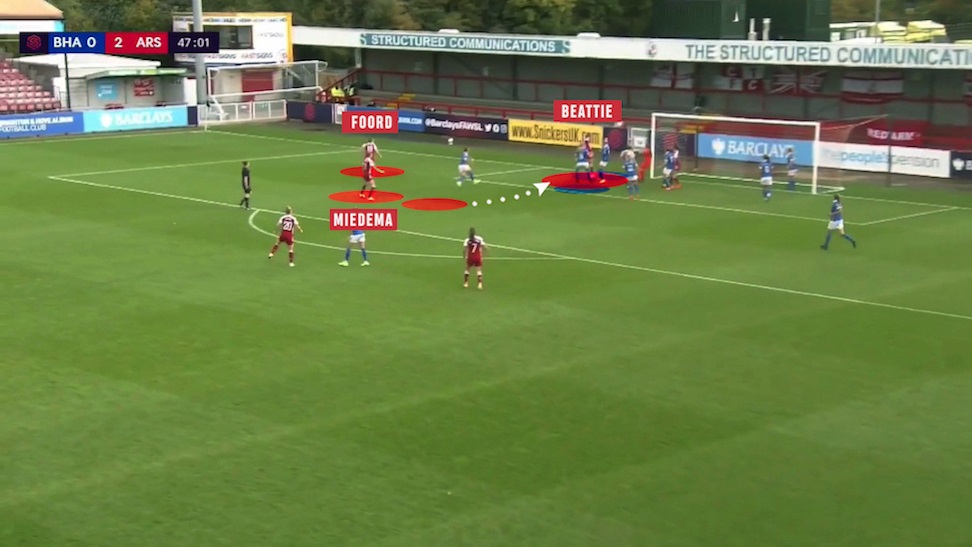 It's a third for @ArsenalWFC! @jbeattie91 at the back post ?#BarclaysFAWSL pic.twitter.com/MASYTqDQyZ

The fourth goal is another example of Arsenal attracting the opponent onto them. It has similarities with the second goal, albeit without the switch of play. Again, Arsenal ‘play with their food’ in the left-back slot, inviting Brighton onto them.

Wälti receives the ball with three Brighton midfielders closing her down. Lia ‘plays possum’ by going back to McCabe at left-back, inviting them to inch forward even more. At the bottom of your screen, you can already see the space Wubben-Moy has to play with on the right. 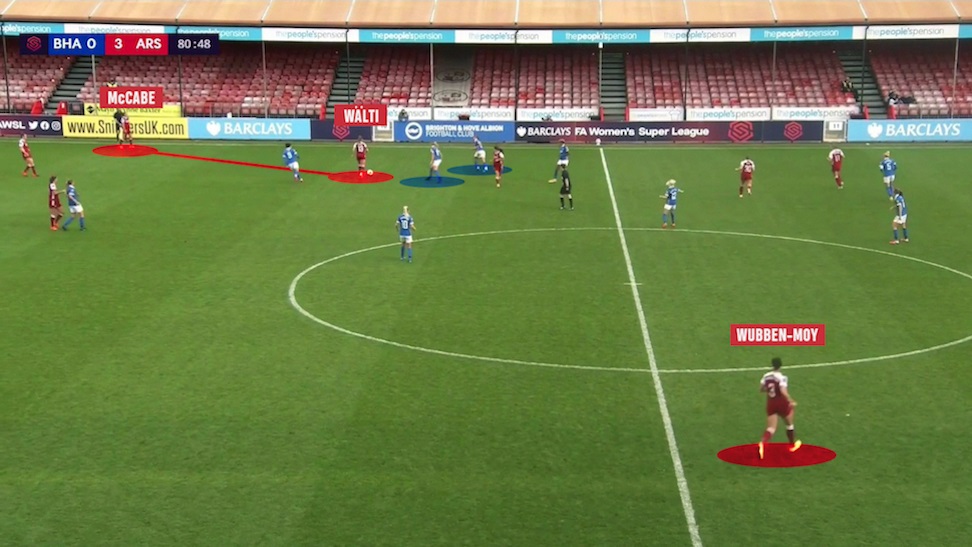 Wälti and McCabe go backwards even further and look at how much Brighton have edged up the pitch with just two passes in the left-back area. 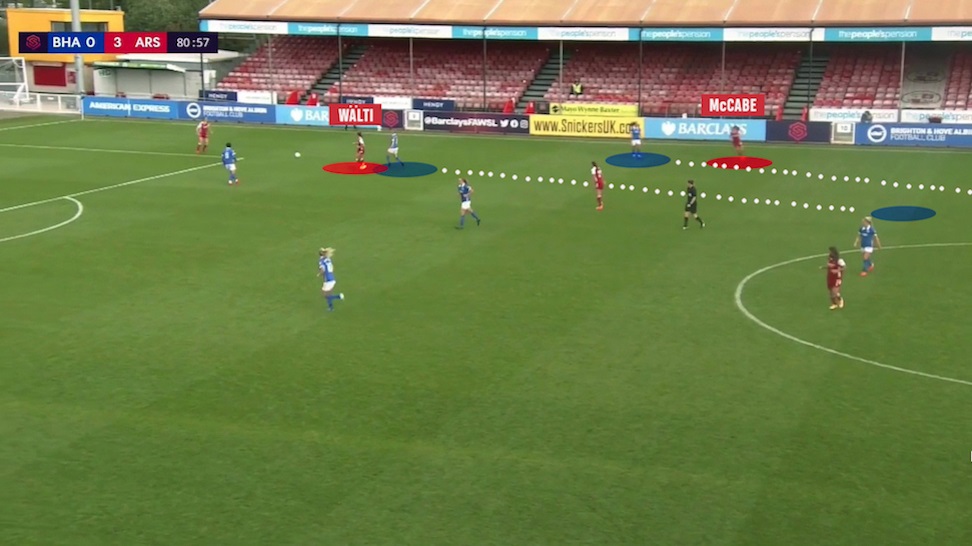 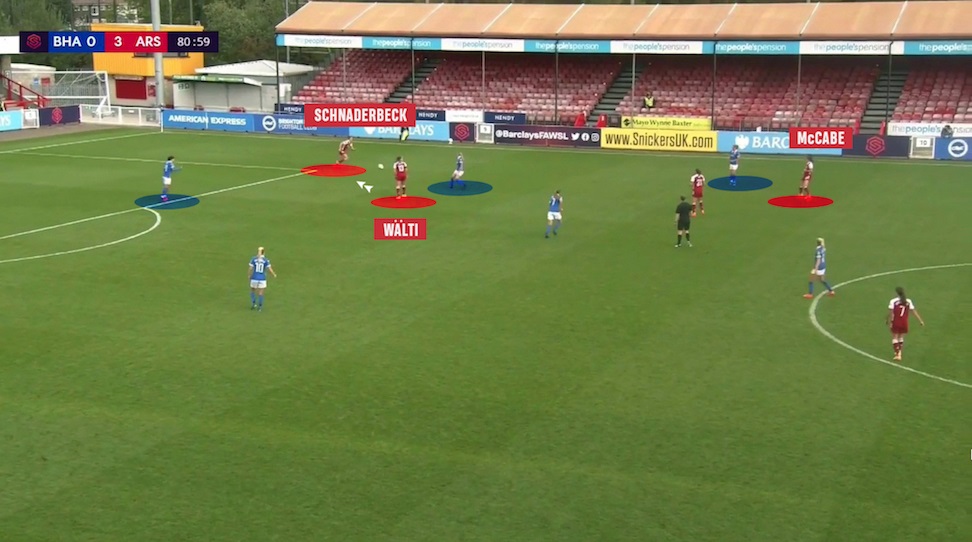 What they have done is clear some space for Schnaderbeck to move into the left-back slot, Wälti gives her the ball and then immediately takes the Brighton attacker at her back with her. McCabe has just started to edge up the pitch too, taking another Brighton marker away. This creates space for Viki to drive into in the left-back area McCabe has vacated. 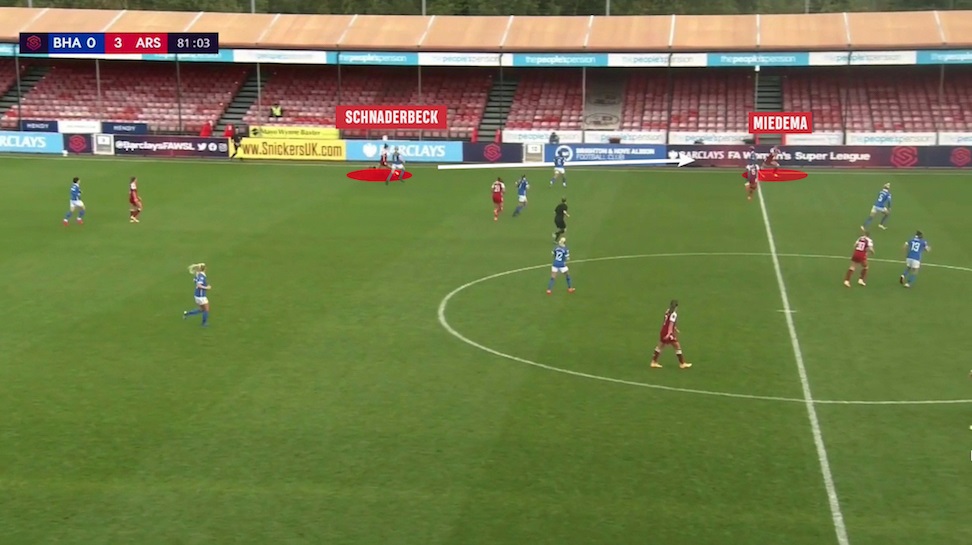 Miedema now has space and time with the ball and that adds up to nothing good for Brighton, look at how frantically their defenders are now chasing back, having been encouraged to edge towards the halfway line by Wälti and McCabe’s play seconds earlier. 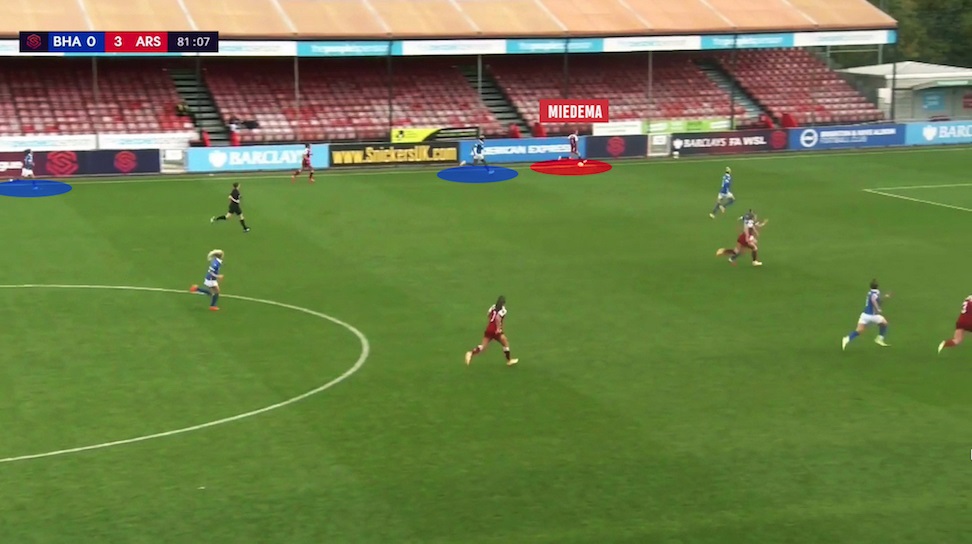 Not only have Brighton’s defenders been encouraged high up the pitch, they have also been encouraged over to the left-side. Miedema’s cross is excellent and Wubben-Moy has powered beyond Mead on the right-wing to meet the delivery and score her first Arsenal goal. 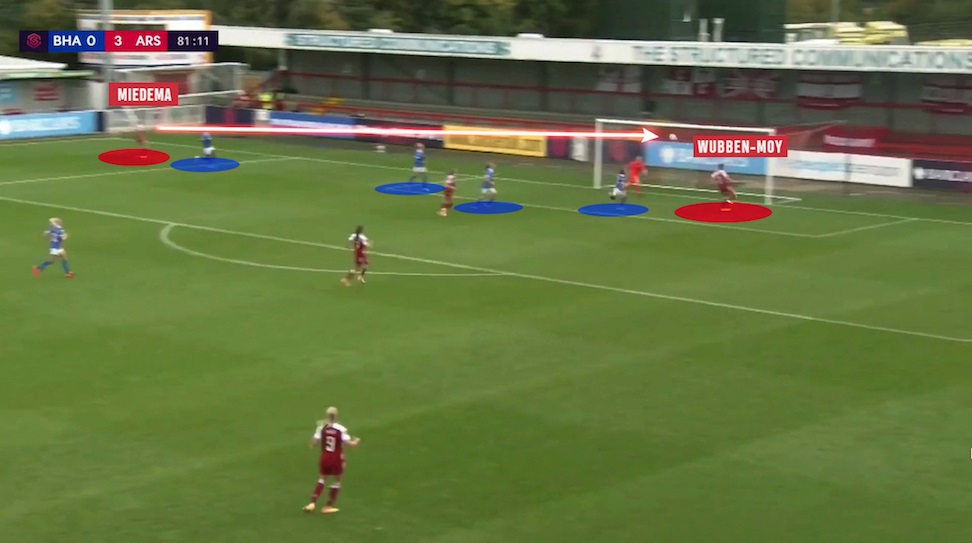 It's a fourth for @ArsenalWFC and @lottewubbenmoy gets her first goal of the season for the Gunners! ?#BarclaysFAWSL pic.twitter.com/muuEvX0omk

The fifth goal is much more improvised with McCabe and Miedema combining. McCabe simply follows her instinct and sees where the space is. She moves into the left half-space to combine with the Dutch striker. First, she plays a pass to Miedema in the channel and sensing Viv might get dragged slightly wide, she decides to run and fill-in the centre-forward spot. 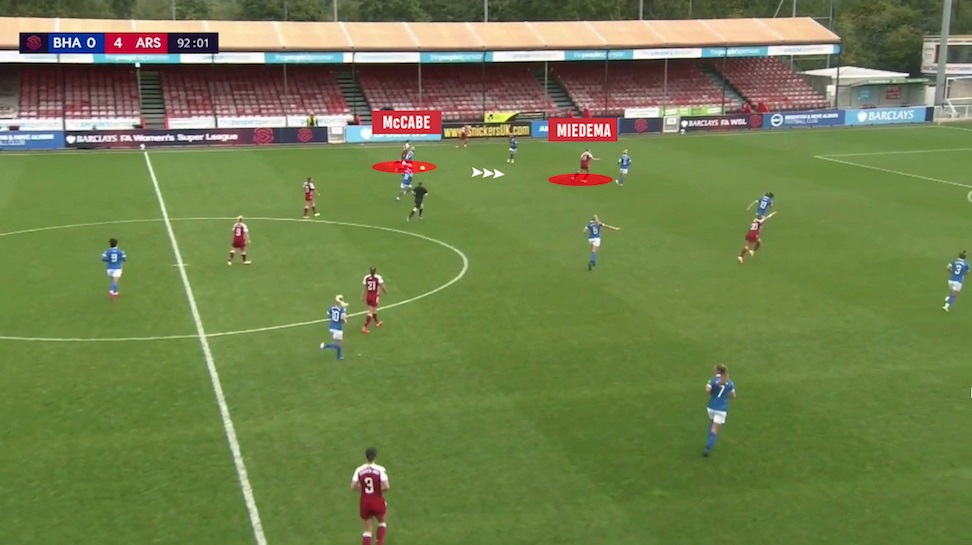 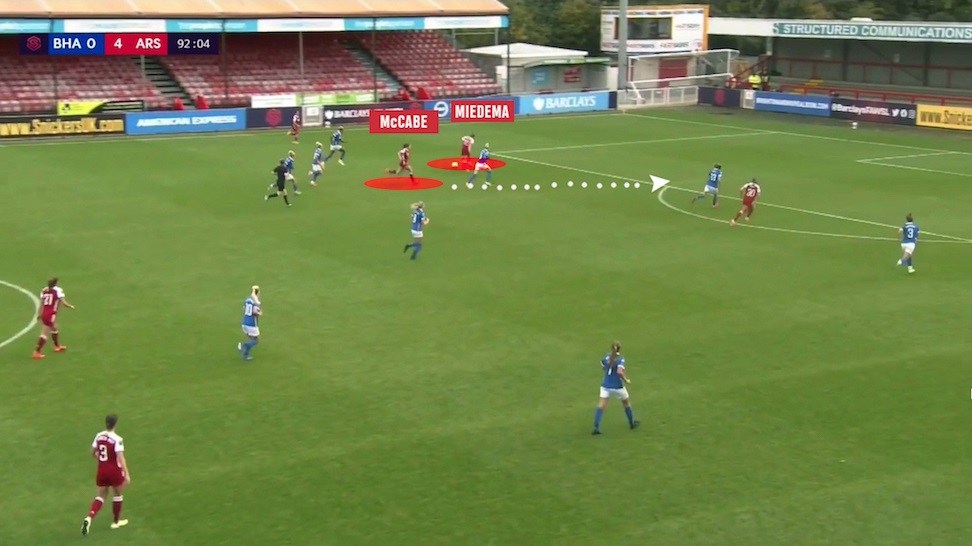 Miedema sees McCabe’s run and prods the ball inside but Katie just can’t quite get the ball out of her feet to shoot first time. 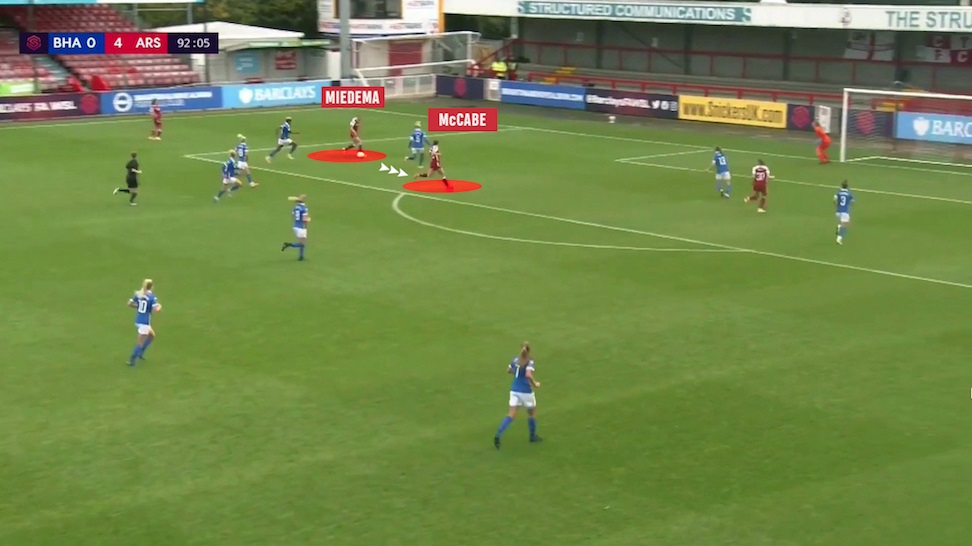 Now it’s Viv’s turn to see that McCabe has been pushed wide and to move inside to the centre-forward position and McCabe doesn’t even need to look up to know that Miedema has made that move. She just dinks the ball into that area and fully expects Miedema to be there. 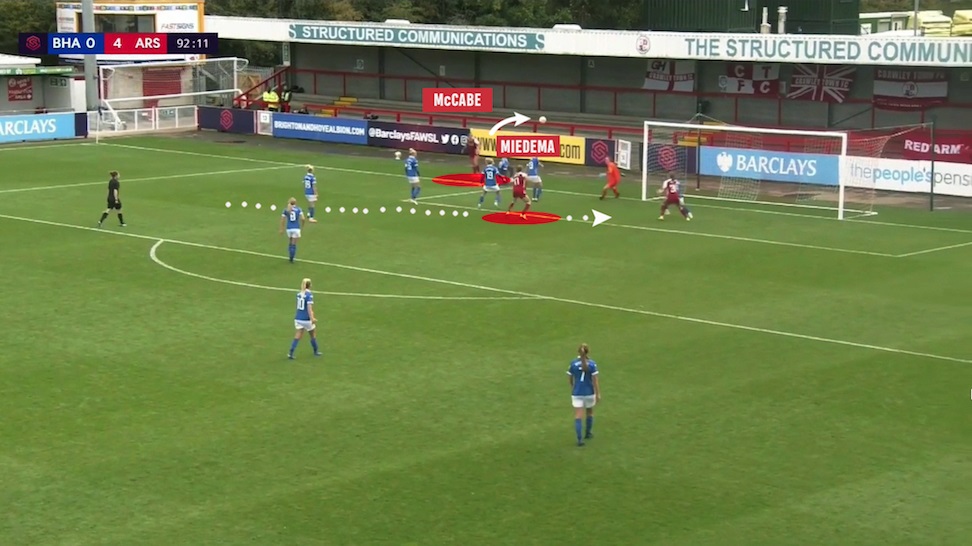 And she is. And it just so happens that she has managed to move away from the three Brighton defenders in the process. And she scores. Because that’s what Vivianne Miedema does. 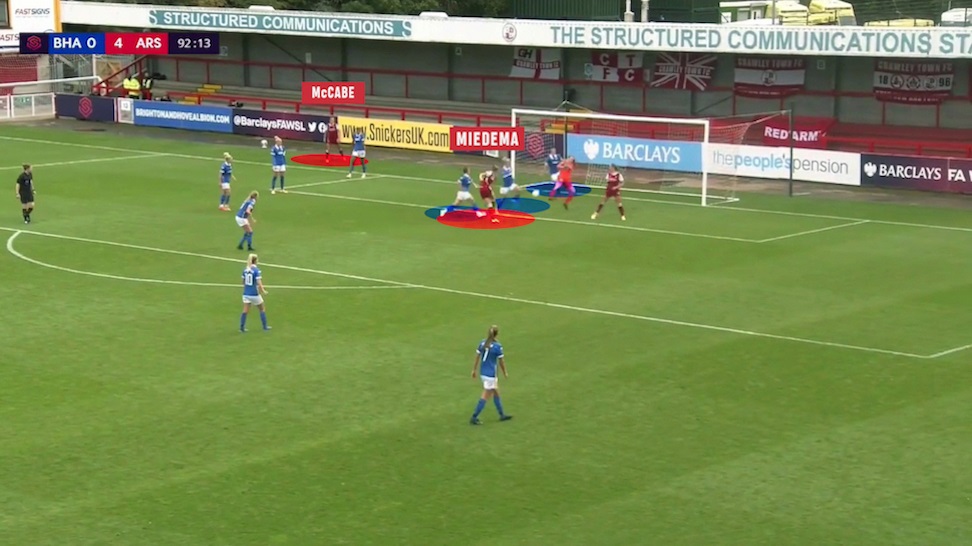 Here's how @VivianneMiedema wrapped up the victory for @ArsenalWFC ?

49 goals in the #BarclaysFAWSL… she's now tied with @lilkeets for the all-time goalscoring record! ? pic.twitter.com/E45I3r1FEf

Thanks Tim, interesting analysis of how the goals are created, including the quality of our players in terms of mental as well as physical skills. It was good to see Katie at the right end of the pitch in this match and her involvement with the goals. Foord is definitely starting to find her form. She is tenacious and tough in addition to her footballing skills. The whole team seemed to work better yesterday – I thought the game would have been much closer – and we also kept a clean sheet in the league! I missed the first goal,… Read more »

My only worry so far is that we can turn on the style against every team apart from Man City and Chelsea. We’ll have to win at least two games against them this season if we are to win the league.

Its the Arsenal
Reply to  canon fodder

Good work Tim. Too good! Opposing coaches will be to these breakdowns before they play us.

thanks Tim & Miedemastuff, this is so well-done! And I do think the professional graphics add a lot to it 🙂

Talking stats. This sounds incredible but I read the girls attempted 734 passes on Sunday with Leah leading the way with 104.

The team played well last weekend but the stat I am most concerned about is from the the official club website. A handful of games into the season and we have 7, yes seven, first teamers in the treatment room already! Calf and hamstring injuries appear to be commonplace at the moment. In the next month we have the Spuds twice, ManU and Chelsea at home and if these injuries turn into prolonged absences which seems to happen frequently we’ll be back into struggling to field a team once again. Perhaps we need less scrutiny on the tactics and more… Read more »