Saka: The boss told us not to let them frustrate us

THE LOWDOWN
Arsenal travel to Crawley Town’s Broadfield Road Stadium on Sunday to take on Hope Powell’s stubborn Brighton side. The Gunners have beaten the Seagulls 4-0, 4-0, 4-0 and 4-1. However, Powell’s side have improved this season and have already held Manchester City to a draw away from home this season.

After Wednesday evening’s defeat to Chelsea, Montemurro admitted there was a greater focus on this game due to the availability of WSL points. “We need to worry about what we need to do because Brighton are a very well organised and they’ve already taken points off a super squad like Manchester City. We expect a very difficult game and they have some elements that can definitely unlock you.”

? Watch the highlights from a frustrating evening at Kingsmeadow ?#ContiCup ?

Despite a seamless WSL record against Brighton, Arsenal were held to a 0-0 draw by Powell’s side in the Conti Cup last season. Montemurro will want to maintain his team’s perfect league start, especially with Manchester City and Chelsea playing one another later in the day on Sunday- giving Arsenal a chance to extend their lead over both of their most likely title contenders at the top.

The Gunners attacked well but an unfamiliar back line defended poorly. Leah Williamson and Katie McCabe will probably come back into the team to restore that sense of cohesion. The front line of Mead, Miedema and Foord has shown some real synergy in recent games and they will get another chance to establish their partnership on Sunday.

TEAM NEWS
Joe Montemurro says this game will probably come slightly too soon for Kim Little and Jordan Nobbs, who are nursing slight hamstring strains. Lydia Williams is in full training again after an ankle problem but will likely be allowed further time to fully recover. Steph Catley [calf] is earmarked for a return in the international break. Jill Roord [knee] is coming along nicely but won’t be fit for this game, Lisa Evans [calf] won’t return until after the international break.

LAST TIME OUT
Goals from Danielle van de Donk, Jill Roord, Jordan Nobbs and Beth Mead gave Arsenal a 4-0 win over Brighton in January. It was in this fixture in April 2019 that Arsenal sealed the WSL title thanks to goals from Miedema, McCabe, Mead and van de Donk.

PLAYER TO WATCH
With Kim Little, Jordan Nobbs and Jill Roord unavailable, much of the creative burden from midfield will fall on Danielle van de Donk, playing in her favoured number 10 role. On Wednesday, DvD enjoyed probably her best performance of the season in a scrappy, transitional game at Kingsmeadow.

Sunday will be more about patience for Arsenal and van de Donk, where incision will be the order of the day against a Seagulls side likely to play with two banks of four ahead of their penalty area. Van de Donk’s goal after three minutes in this fixture last season went a long way to setting the tone for the game and Arsenal will hope for something similar this weekend. 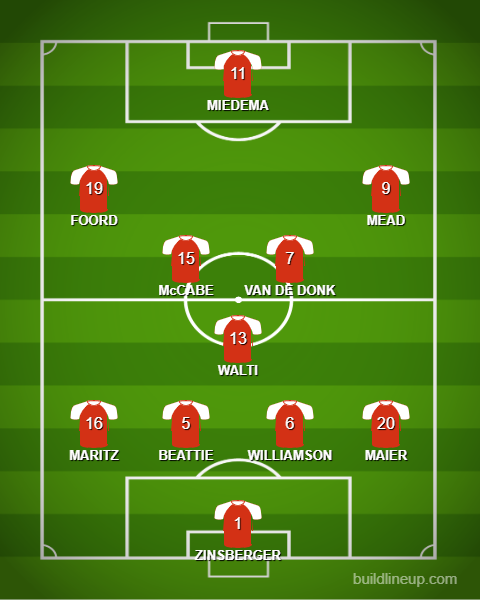 THE OPPOSITION
Brighton have four points from nine in the WSL this season having started the season with a 2-0 victory over Birmingham City followed by a very creditable 0-0 draw at Manchester City. However, they were beaten handily by Manchester United last weekend and allowed West Ham to score twice in a 2-2 draw in the Conti Cup on Wednesday evening.

Hope Powell’s teams tend to be very defensively organised, playing in a deep block but always with threat on the counter. In Irish midfielder Denise O’Sullivan, Brighton pulled off one of the most underrated transfer coups of the summer. O’Sullivan joined on loan from North Carolina Courage and is an international teammate of Katie McCabe.

⚽ All the action from yesterday's @ContiUK Cup group stage match.

HOW TO CATCH THE GAME
In the UK, this game will be broadcast live on BBC Online and the red button, kicking off at 12.30pm. If your country has a TV deal with the WSL [more information here] then it’s very likely that this game will be picked up by your local provider. If your country doesn’t have a WSL television rights deal; then the game is available free of charge on the FA Player app.

COMING UP
We will have the usual post-match reaction from Joe Montemurro after the game and available on the site shortly after full-time. I’m working on putting some extra content together ahead of next weekend’s North London derby so watch this space!

Assuming Arsenal score, I will also have another piece breaking down the goals from this game on the site on Monday evening, similar to the one I produced for the Bristol City game last week.

‘When I came back from injury I...

Saka: The boss told us not to let them frustrate us