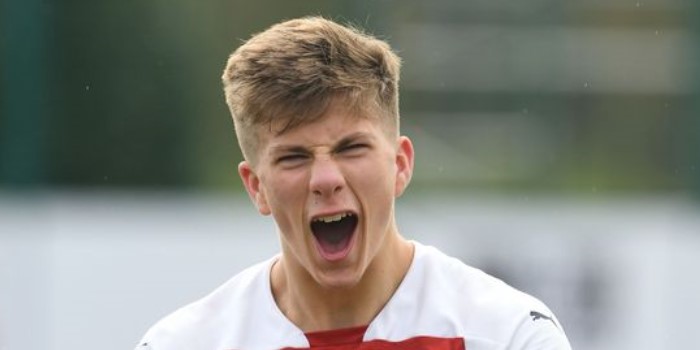 There was one final departure on loan from Arsenal in the closing stages of the EFL transfer window, with defender Harry Clarke securing a switch to Oldham Athletic.

Clarke will stay with Oldham, who are managed by Harry Kewell, until at least January 20th, and it appears that he will face a major test of his credentials.

Oldham are currently bottom of League Two and have taken just one point from their first five games, with their defending having not been of a particularly high standard, which is why they have elected to bring in Clarke.

At the age of 19, Clarke is set to gain his first experience of senior football, although he has trained with Arsenal’s first-team squad on many occasions.

The centre-back has frequently captained Arsenal’s U23 side and is adept at playing out from the back.

Occasionally he can be a little too rash with his challenges, but on the whole he is a talented player and this loan should benefit him greatly, provided that he receives sufficient game time.

With so many first-team centre-backs at Arsenal it appeared highly unlikely that Clarke would be involved with the senior squad this season, so this move makes much sense from that perspective.

I am so fricking Arsenal. Even the adverts on this page are trying to sell me Arsenal shirts.

Haha! I got posh watches. Shows the algorithm doesn’t know me at all! ?

Mine is something about “working smarter”. Surely they mean “doing the absolute bare minimum” in which case they’re spot on.

I’m being invited to ‘kill the goblin’. I’m guessing that’s a euphemism.

Oh come on. I’ve got cardigans. I’m going back to the allotment. No WiFi to mock me there.

Radiators for me……..boring compared to the rest of you.

Well. We’ve found something to do during the interlull that’s more entertaining than national football…

Ok, no more loans? I’m interested how much other young lads (Balogun, Azeez, Cotrell) will feature this season. Would absolutely love to see some more young players making the jump into the first team. But our loanees will probably get the chance next year. Busing to see them developing.
Up The Arsenal

Frees up a bit of room. Maybe Saliba can get on the bench for the U23s now.

Take it from my digestive system – old ham is always a big challenge.

Always go for the freshest.