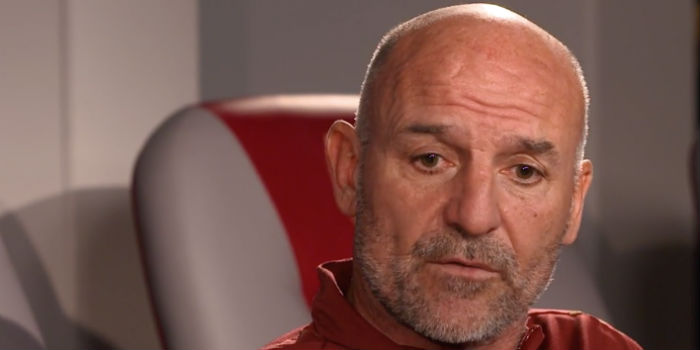 Arsenal U23s fell to another defeat yesterday as they were beaten 4-1 by their Manchester City counterparts.

Steve Bould’s side started well, with new signing Nikolaj Moller scoring on his debut, but matters took a turn for the worse when goalkeeper Karl Hein was sent off.

Unusually, Arsenal didn’t name a goalkeeper on the bench so Taylor Foran, a defender, had to go in goal for 83 minutes on what was his debut for the U23s.

Foran did his utmost to try and keep City at bay and made some excellent saves but the hosts eventually prevailed.

Going down to ten men and playing with an outfield player in goal inevitably didn’t help matters for Arsenal, but their overall performance was rather disappointing.

Arsenal have taken just two points from six games in the league this season and there are already concerns regarding whether they will be able to remain in the top tier of Premier League 2.

Results aren’t of the greatest importance at youth level but it is vital that the U23s stay in the top division so that they can continue to test themselves against the best youngsters.

Next up for Bould’s side is a home game against Liverpool.

Sounds like we need some first team squad players playing.

Well I can think of two with nothing better to do…

Are they up to that level any more?

Perfect opportunity for Mesut to demonstrate his endless loyalty towards Arsenal.
Based on his twitter feed, he seems to be pretty bored anyway.

One of these two can encourage all players by giving them double of their salaries.

Some changes is a good plan

Not sure why Willock and Nelson couldn’t have played this one. They only had a handful of minutes on Thursday night.
And where was Saliba?
Someone mentioned that 3 players over 23 years old are allowed in the team, think Sokrates and Ozil need to be involved here.
No goalkeeper on the bench, that is quite frankly embarrassing.

Is Ozil joining them soon? What a lift it will be having Ozil join the U-23. At least he will work for his salaries

That’s as long as he doesn’t have to tackle anyone.

What exactly did we expect when we arbitrarily picked free agents and players released from European lower league teams?

I feel kind of bad for the likes of genuine prospects like Balogun who actually needs to use these games as a stage for his talent.

Did you read the bit about the keeper getting sent off early and is having to play a defender in goal?

You should also read that we have 2 points from 6 games !

That’s pretty shocking, by all accounts Foran did extremely well, on his debut, but he must be wondering what the hell is going on. BFG needs to get involved.

I don’t read the articles. I just react to the headline. What’s this about a goalkeeper?

The u23 squad has been decimated by loaning players out and bringing in new guys from outside the academy who’ve never trained together, so it’s to be expected that they take time to gel. That said, I’d be interested to hear what others think of Steve Bould, is he a good coach or is it time to try someone else. It’s a pity Freddie left, he seemed to get so much out of the young players.

Steve Bould has won leagues and cups at this level so I doubt that he doesn’t have any idea about the role he’s filling, the goalkeeper scenario is worrying but I doubt that any of us really know what’s going on in that regard. I agree Freddie has a definite ability to connect and coach the youngsters but he never had the majority of his squad sent out on loan en masse.

The biggest question from this is why did we not have a sub keeper on the bench…or does it mean that little to the club? You would think a sub keeper would be a pretty basic requirement for any team

Sounds pretty shambolic to me

I’m beginning to seriously doubt Steve Bould as a coach. Yes we played with 10 men but prior results haven’t really shown this to be a one off.

I say we poach some of the Ajax academy coaches. They must be doing something right judging from the amount of top class players coming out of there

I wonder if we need to look at Bould? Perhaps he just isn’t suited to this kind of role. Depending upon results over the season, I think Arsenal may be re-considering his position in the summer.

I tend to agree and I’m someone who defended Steve a lot when he was getting flack as a first team coach under Emery, but something is missing with the U23s for sure. As worrying is the U18s as well who aren’t playing well either.

I say we should bring Dennis home to work alongside Bouldy. Imagine coming to work every day and learning from Dennis fucking Bergkamp.