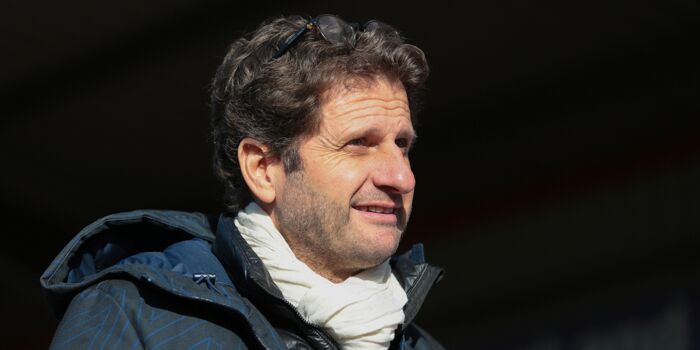 On inviting Brighton to press the Arsenal defence to find space in attacking areas….

When teams play us in a 442 we know they’re going to press us aggressively in the first phase but we want to keep making the distances longer between the first phase and the second phase where their middle four were. Once we were able to do that we were able to get through them quite easily. Our way is to keep finding the spaces to get into those areas, we knew there wouldn’t be much space between their midfield and their defensive line so we knew we had to create that space behind their midfield line.

On the recent form of Caitlin Foord…

She has a different dimension, she’s a little more explosive, very good at protecting the ball and very good at coming inside, which is probably a different asset to our other wingers. I’m proud of her, she’s come off a very difficult couple of years, a couple of very sporadic years in the US and in Japan. We’re very happy that she’s beginning to find her rhythm and her feet. We know that she’s going to get better and better.

On the qualities of Lia Walti…

We know what the team lacks when Lia isn’t involved and her ability to open space for our defenders to play beyond her is very, very important. I’m proud of her but she was well complemented today by Malin Gut. She was really great in the second phase of build-up and really showed signs of the player we think we’ve signed for the future.

On Leonie Maier going off early in the second half…

She had a knock on the quad she was feeling a little bit and we didn’t need to take a risk knowing we have a full week leading into the Tottenham game.

She’s proven herself with the goals and her character. She is an absolute privilege to coach but also to know her as a person- she’s a phenomenal girl. I’m so proud to be part of her growth we’re all proud of her as a family as we are at Arsenal. We always talk about her goals and her finishing but the amount of work she does off the ball, creating space knowing when to trigger the press is incredible. When people can come to see our games again I urge people to watch the work she does off the ball and that’s the mark of a great player.

Here's how @VivianneMiedema wrapped up the victory for @ArsenalWFC ?

49 goals in the #BarclaysFAWSL… she's now tied with @lilkeets for the all-time goalscoring record! ? pic.twitter.com/E45I3r1FEf

On a first Arsenal goal for Lotte Wubben-Moy…

She’s come from a college environment which is a different environment we always planned to ease her into the squad and give her opportunities. What I like about Lotte is her attitude but also her versatility, she can play as a centre-half, she played very well at right-back today but she can also play as a holding midfielder. That complements the squad we’ve got and she is young too, which is very exciting for Arsenal and England.

This is what it means to score for The Arsenal ☺️

We’re so happy to have you home, @LotteWubbenMoy ❤️ pic.twitter.com/2fbiiXDvQ3

Time to go up a difficulty setting

Great win. Foord and DvD were unplayable.
But our problems have never been beating the likes of Brighton handily. How does Joe come up with ways to play for wins against Chelsea and man city?

Tbf Arsenal beat City a lot [just always at home]. Chelsea is the question but it is a dilemma, do you change your whole style and squad just to beat one team? Chelsea’s style is great for big games but not always against deep blocks. Arsenal’s style doesn’t work against Chelsea but gives Arsenal 54 points a season against 4th downwards. I think the title will be really close again this year as it was last year.

@Tim, sometimes you do need to change a style if it isn’t work and has been consistently found wanting in certain games. This IMO was also Wenger’s biggest failing towards the end. He was adjusting enough the the teams he was playing and tried to rely on “beautiful football” to win out in all circumstances. Arteta is already showing how key it is to adjust styles to personnel. I think Joe could use a little of that versatility and pragmatism at times instead of forcing one system, one style on every opponent.

For me we have too talented players to have record like we do against Chelsea. That’s why I am critical of Joe’s record against them. I understand the tactics thing and everything, but 1 win, 1 draw and 8 defeats is not good enough even if we take into account that their tactics is better suited to play us than our’s is to play them. Last games we have conceded in the first 10 minutes, I undestand we probably can’t learn how to park a bus for 90 min, but to be more pragmatic against best counterattacking team in the… Read more »

I maybe naive, but I don’t believe that player against player our best 11 or 14 is that much worse than Chelsea’s best 14 as our record shows. Our problem is that we haven’t been able to field our best 11 in 3 years now. I admit and fully understand that because our injury record the debate about Joe’s big game thing needs so much more nuance, than just saying not good enough. I also admit that I have been really annoyed with couple of big games, where he has really messed up (Chelsea at home, PSG), when he had… Read more »

It will be a tight battle with Chelsea this season. In our favour they have European games to play and they have dropped 2 points already. I’m not concerned too much about City as they have already dropped 5 points and again will have more games and travelling to accommodate. We need to keep a close eye on Everton. They went under the radar by not signing household names but are flying this season; Dark horses for the title? We need to take all 6 points off them!

Agreed. Everton and Man U probably won’t win the league, but the team that does will have to do the double over them both.

Not worried about Everton. All their wins are against the bottom 4, but I agree are building confidence.
And Tim- About finding a way against the likes of Chelsea and man city(away), Joe has to find way. That’s why he’s the manager. We can use the excuses of injuries, etc. But it’s obvious he cannot seem to impose his will in those games. Maybe he needs a rethink about that.
I don’t have the answers as I’m not qualified to offer them.

Well done ladies. Six first choice players down and still a class performance against an improved Brighton team. Okay the acid test will always be Chelski and MankC but if we can take 6 from 12 from those two the chances are good to reclaim the title. Although, thankfully, from a competition perspective it looks like Everton and MankU are set to make it more interesting.

Loved the 4th goal as it was a show of tremendous desire from Viv and LWM (right-back popping up to score at far post is always exhilarating to watch!)

I think we could have a future Lucy Bronze in our midst with Lotte. I’m glad we brought her back. Her goal will give her great confidence to push up when she can and as she gains more experience at defending she could become a stalwart like her mate from Milton Keynes, Leah!

I hope our “injury fc” team comes back quickly. We need every woman. The key for us going forward is really the backline and Lia in Midfield. If we can line up well and they perform, than we are good to go.
I think we should appreciate the performance and the wins, an do not look at “oh we can’t beat Chelsea”. Every game is different. Though it would be really nice to beat Chelsea again. 😉
Up The Arsenal!

Very happy for Lotte. Moment to give her confidence. Also so so happy for Beats, it probably meant the world to her, after being out for 10 months now. She is so important to us, lets hope we can keep her fit for now. She is so underrated, but improves us a lot. For me Leah and Beats together are the best CB pairing in the league, they compliment eachother better than any other pairing. Also Lia was immense, my best player yesterday. Can we just have some games where we could play backline of Noelle-Leah-Beats-Steph and Lia infront on… Read more »

Agree with the Leah and Beats comment. If only we could keep them together for an entire season!
Also Lia. Lia is Lia and we are a different team (not so good) without her. Hopefully, she can train Malin into being the ‘new’ Lia!

The ladies be like FIFA on beginner difficulty setting..

At least play on Intermediate, girls!