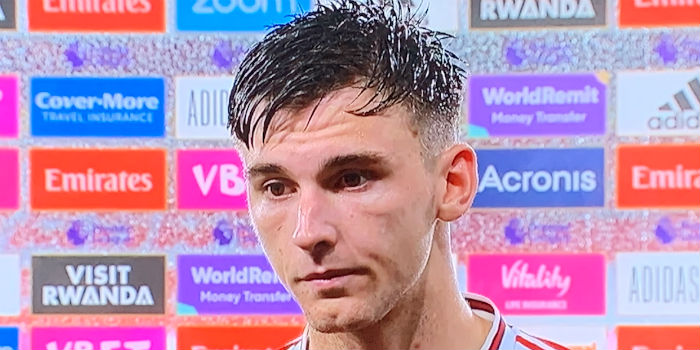 Mikel Arteta says he’s hopeful that Kieran Tierney will be available for Saturday’s Premier League with Man City, but admits he’s not sure if the defender can play.

There was confusion last week after he was reportedly ordered to self-isolate for 14 days having come into close contact with an international teammate who had tested positive for Covid-19.

It led to Arsenal seeking clarification on the situation, but as of Thursday morning it was still unclear whether the Scotsman would be available for selection.

Speaking to the press, the Arsenal boss said, “This is getting very complicated when we send players abroad, you lose some control.

“Some authorities have different regulations to the ones in the Premier League. We are still some discussions with the authorities, and hopefully we will know more this afternoon.’

Asked if there was any chance of Tierney playing, Arteta said, “I hope so.

And on how difficult it was to manage player health and safety during international breaks, he continued, “At the end of the day we know we have a responsibility ourselves with our players with international duties.

“We have to give our players the opportunity to do that. International football needs our players, if not it will not work.

“I think we can still make things better for the future, and hopefully this international break helps minimise some of the errors which have been done. But the reality is that there are always some risks, whether they are here are there.

“[We need] to clarify some rules, certain protocols, try to unify them to give ourselves the best chance to protect our players and protect the clubs as well.”

Meanwhile, Hertha Berlin have announced that on-loan Arsenal midfielder Matteo Guendouzi has tested positive for the virus, and is now in quarantine. They say he is free of symptoms, so let’s hope he suffers no ill-effects.

Totally crazy if he can’t play. Test was clear, if he is still clear why not?

As far as I understand it (and this is a complete headf*ck to understand at times!) I think it’s because tests are not 100% reliable. So you can have ‘false negatives’ and still have it. Hence people are asked to self-isolate for a period as an extra precaution.

He has been isolating and I’m sure they can afford to test him every day to eliminate a dodgy test result.

It is. I think I also read somewhere recently that KT had the virus himself in the summer so a) he’s getting loads of negatives and b) he’s probably still got the antibodies required to avoid further contagion for a while yet. Basically, it’s the bureaucracy of the rules.

Yes, but there is statistics and probabilities to consider here. Having multiple tests come back negative. From a report I read recently he has had 3 negative tests. Now we consider there is a 2-33% (see link). Lets use the average 16% chance. That means the probability of have three false negatives at 16% chance each is 0.41%. Even if we take the worst case scenario for each test (33%) that translates to a 3.6% chance of three subsequent false negatives. At the best case (2%) that translates to 0.001% chance of 3x false negatives. In Lehman’s terms – HE… Read more »

This particular situation is absurd – he clearly does not have it. BUT there are a limited number of tests available so authorities don’t want people just rushing out to keep getting retested over and over following a contact as there are people who genuinely need the test. We’re getting caught up in the fact that Scotland doesn’t want to make one set of rules for footballers and another for everyone else.

Sure, I get all of that. And it’s not me that makes up the rules, i’m just saying what my understanding of them is! His is an odd situation, but I think that was always inevitable with the way the rules have been drawn up. Obviously i hope that he is allowed to play, but I suspect he won’t be because it will come across as one rule for Arsenal and another for other players. From what I can tell, the issue is that KT allowed someone else into his hotel room to play a game – if that wasn’t… Read more »

Hey I’m a doctor who’s spent the last 6 months on the COVID ward. What we’re seeing is those who have been in close contact, within 10-14 can even if they test negative, can eventually test positive and be symptomatic. It’s the latency period we’re worried about. However, if you say he’s tested positive before, he’s likely to have antibodies which would be protective. This however doesn’t stop his ability to pass it on, and furthermore, the length of antibody positivity is not certain. I still have my antibodies but someone who tested positive at the same time as me… Read more »

If teirney plays other scottish players better get playing at weekend

Yup there’s a new wave in my country now and it’s partially due to this reliability/method of testing. A state was seeing a spike in infections and we made it mandatory to be tested if traveling out from the state. If the result was negative, there was no quarantine period. You just have to quarantine waiting for the test results. But as it turned out alot of these negative results were turning positive a couple of days after the negative result. Meaning that these people were roaming around nationwide only to have symptoms appear after a negative result. We went… Read more »

Once again, when it comes to anything involving the simplest degree of administrative endeavour, this club makes a right pig’s breakfast of it. They’ve had all fucking week to get clarification on this matter.

Maybe if we actually had some administrative staff left, we might actually get these sort of ad hoc run of the mill issues clarified in a timely manner befitting a club of this (supposed) stature.

Once again, one of our ‘fans’ leaping to a rather large assumption that the club is at fault and not Lothian Health Authority or the Scottish FA. Pathetic.

It Is What It Is
Reply to  arseblog

This is one of those strange scenarios that was always going to pop up. Unfortunately, I can’t see how Tierney can play without breaking the rules on self-isolation in Scotland or being some kind of special exception (which could have implications for the credibility of the rules, so I imagine would unlikely be agreed to). There have been other players ruled out of games in lower divisions because they have been told to self-isolate, this was always going to affect us too at some point. On the bright side, it will mean KT has had a nice 3 week break… Read more »

This is bullshit. Just play him if negative. 4 or 5 at Liverpool have tested positive and the rest of them aren’t on quarantines.

Bureaucratic nonsense. Nothing to do with ‘safety’. If he tests negative, he should play. The whole one rule for one set of people and one rule for everyone else is exactly why people have lost faith in the authorities ability to control the Covid situation.

What’s the point of testing people and then still requiring them to self isolate after they have tested negative. Footballers are also tested multiple times so test results are more reliable too

I read yesterday that Bruno Fernandes, who has had all negative tests may not have to self isolate, even though he was in close contact to Ronaldo. This was because the rules don’t apply to professional athletes in their sports bubbles.
If true, shouldn’t the same apply here?

Different rules in different countries. I guess it also depends how close the contact was. Tierney shared a hotel room with someone who was positive, maybe Fernandes was more apart?

I read yesterday that Bruno Fernandes, who has had all negative tests may not have to self isolate, even though he was in close contact to Ronaldo. This was because the rules don’t apply to professional athletes in their sports bubbles.
If true, shouldn’t the same apply here?

Unless he showed signs of being ill, the test is a waste of time and money if he still has to self-isolate.

Compared to the Ozil situation it’s a drop in the ocean in terms of wasting resources, but it’s equally annoying nonetheless.

I don’t think he’s going to play, I doubt if he’s even been able to train properly, what a stupid situation.

I trust you’re OK, Douzi. This too shall pass.