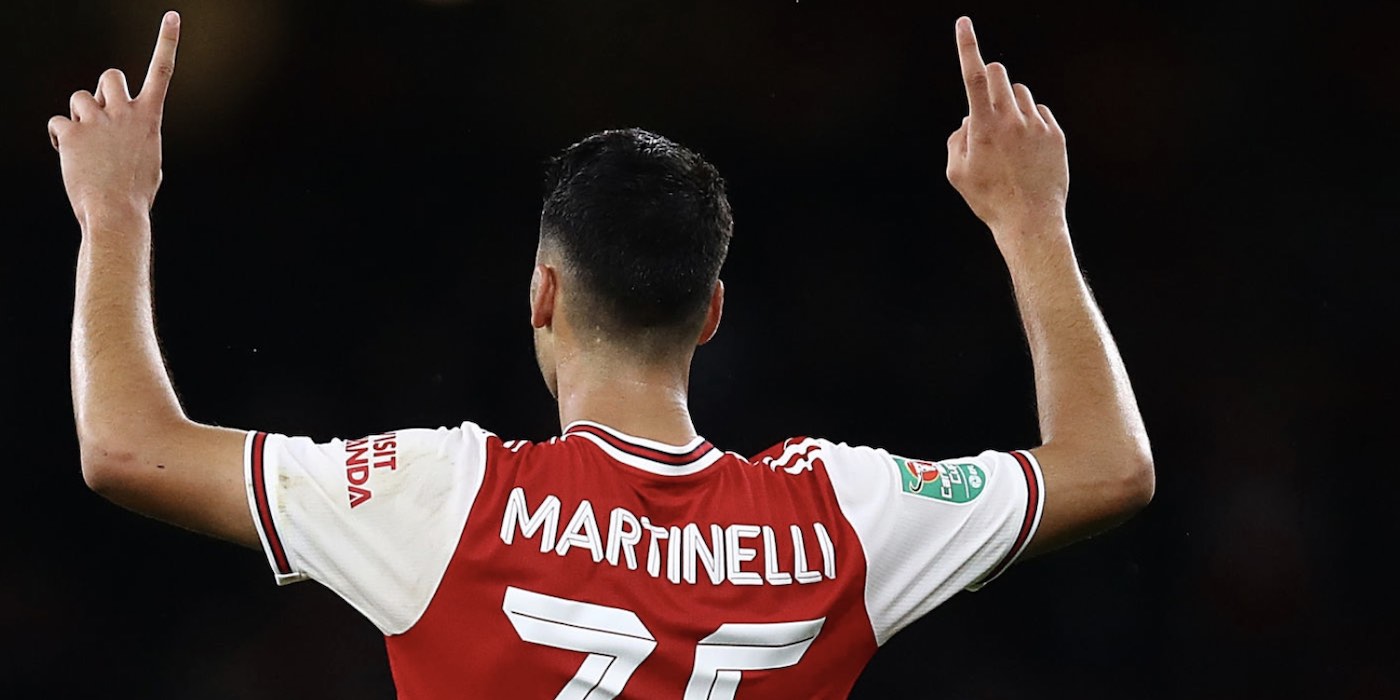 Gabriel Martinelli is hoping to resume ball work in the near future as he steps up his recovery from an injury picked up in training in June.

The 19-year-old underwent a procedure to repair a lesion in the cartilage of the left knee just after football returned from lockdown restrictions and is not expected to feature for the first team until 2021.

Having last played for Arsenal way back in March when the Gunners beat Portsmouth in the FA Cup, it’s been a frustrating time for the teenager.

On the plus side, he’s on the mend.

“I’m feeling very well, I’m regaining confidence and I can feel my knee is better,” he told Arsenal Digital.

“After an injury like this you are kind of scared to force the knee again but the past couple of weeks it has been fine and soon I can start training with the ball.”

In Martinelli’s absence, the Gunners have added two new Brazilians to the ranks – Willian and Gabriel Magalhães – and secured the services of David Luiz for another year. Throw in Cedric Soares and technical director Edu and Portuguese has quickly become a dominant language at London Colney.

“I’m very happy, it’s good to have players from your country that speak your language,” reflected Martinelli.

“I already knew David Luiz and now it is great to meet Willian and Gabi.

“I only just met them but I can already tell they are great guys, we are always laughing and it is a great environment to be in. They are playing well and giving their best too. I think they have a lot to offer to this club on and off the pitch.”

Due to more happening in the past 6 months than in most decades, I think its easy to forget we have one of the most exciting teenage forwards in Europe to come back to our squad! His goal contribution last year was incredible. Will be so exciting to see him back.

Yes, that’s true. Let’s hope he makes a speedy, but more importantly, a full recovery from what can be a very tricky injury. The club won’t want to take any chances so it will be quite some time yet before we see him I suspect.

You are absolutely right, his potential is huge. I also believe he shows a lot of leadership and passion beside his obvious contribution in pure footballing, something you might expect from older players. It will feel like a new signing in the spring when he (hopefully) will be back on the pitch!

well said and so true! Imagine Martenelli and Saka combining down the left side. That’s tasty.

Without wishing to be the eternal pessimist, I hope Gabriel is treated by fans with patience. Hector Bellerin was lampooned as he recovered to playing form after the ACL. This young guy is going to take time, and we must collectively respect his pace and health.

Even if he doesn’t regain his place completely this season.

His finishing just seems so natural. Real potential to be a super star!

Pepe The Frog
Reply to  Chamakhyungpark

Yes, and he can score with either foot and his head. Has that knack of getting the ball into net, doesn’t matter if it goes in cleanly, looks beautiful or is plain fucking ugly. Very few players have that ability.

Don’t know about you guys, but I’ve been thinking about this kid a lot. Let’s not forget how immense he was for us last year. I hope they’re taking scans of his knee every day and he’s healing up properly. No need to rush. I was saying last year and I’ll say it again that he belongs in the center. Aouar could be a great addition but frankly, if Martinelli learns enough from Willian he can be the middleman we need. Could say the same thing about Saka, but Gabby gives us something very daring and unpredictable. All of us… Read more »

Starting to get tired of ‘ Aouar crap’.
Let MA build the team with what we already have; we made interesting signings & we need to appreciate that.

He’s direct, fast, great at getting to and past the byline, good crosser and brilliant finisher. Those are attributes of a forward. Saka has a lot of that too, but he has the ability to pick a pass and is really strong in tight spaces too. Saka is the one I can see developing as an AM. My hope is Saka plays as a LW this season and Willian in an AM roles – but they play interchangeably. Both have the ability to get into wide spaces and deliver crosses, but also create. Push Auba to the middle (ST) and… Read more »

A truly world-class prospect. I hope the physios at Arsenal take extra care in bringing him back. These kinds of injuries can linger or cause other injuries and ruin a player’s career.

That’s a very good point about injuries. Unfortunately, we have a fairly recent history of players whose careers have been ruined through injury, or later injuries that have resulted from weakness caused by the earlier one. Great care will be needed here.

I keep wondering what might have been with Diaby…and weep. Dan Smith and his needless zeal robbed the world of real world class midfielder.
You need to watch the game against Liverpool in ’12 again. He glided elegantly like a Stallion at Anfield.

Yes, quite right – one of the great “what ifs” – and there’s our old pal Wilshere as well.

…and imagine the greatness that could have been achieved by Rosicky and Cazorla!

He was brilliant in that game! I still think about it!

Great and exciting prospect and deserves great things. Injury sounded very tricky and it must create anxiety at such a young age. I had thought with a cartilage that some players could be back within a few months after having it operated on, so guess this was a non straightforward one. Wishing him all the best to resume where he left off.

LANS. one of the more exciting ones

Can’t wait to have you back on the pitch, Martinelli.

When i think of Martinelli i dont know why Alexandre Pato comes to mind. I remember my friends who were Milan fans how buzzed they were for him, just like we are with Gabi. His dad has been a great support in making him the athlete he is today, hope he is not rushed back and has a smooth comeback. He is one of the real gems we have in our squad, as much as i want him to see back in the squad and see him play , i just want him to recover properly more than anything else.

Pleased for the lad. It will be good to have him back.

And no, Biggles, don’t go getting any ideas about putting him up for sale…..?

For me…… his injury, the timing of it, was probably the biggest disappointment ( on the pitch) for everyone at The Arse…. not least to this great talented player himself.
Things have been improving but a real bonus to us , would be watching this lad playing….. he is such a joy.
Come on back buddy!!!