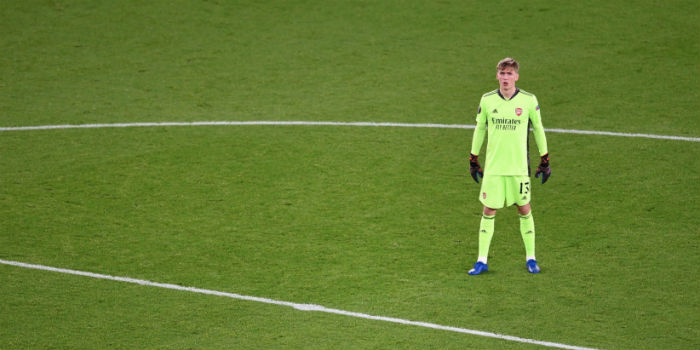 Alex Runarsson says he’s proud to have made his Arsenal debut after coming through his first test at the Emirates with a clean sheet.

On a night when the Gunners dominated Europa League minnows Dundalk from start to finish, the Iceland international didn’t have a huge amount to do between the sticks.

After a smart save inside four minutes to deny Patrick McEleney’s early low drive, he mostly had a watching brief although he did show confidence claiming a couple of corners and his distribution was faultless.

If given more chances by the boss, Runarsson is expecting further group stage games to pan out in a similar manner.

“I think that is normal playing for a club like Arsenal,” he said of the 63% possession the Gunners ended with.

“We have the ball a lot and there are going to be a lot of games like this. But you have to be alert for maybe the one or two chances and I was a little lucky it came at the beginning of the game, it gave me a good start.

“But I think this is going to be the image of a lot of games for Arsenal.

“I’m proud to have reached this achievement [making my debut] and I’m proud of the team that we got a very good win. All games in Europe are difficult so it is a very good result.”

Congratulations to Alex on his debut. He’ll be looking for another opportunity next week when Norwegian side Molde travel to N5.

This guy must be seriously counting his lucky stars, basically dropped as #1 in mustardland only to bounce right into the backup duties at Arsenal – an injury away from being the regular starter. Shows it really isn’t what you know, but who you know…

So many things had to go right for him to land up at arsenal. Seriously, i hate that luck is such an huge factor in our life.

Whilst true, you have to work hard to put yourself in those situations where luck can play it’s part.

To use a football analogy: If you don’t shoot you’ll never score.

To be fair, it’s like most of the under 23 squad won a competition to play for Arsenal for a year.

Edu sings while the new signings are led through the halls at Colney – “Come with me, and you’ll see, a world of non negotiables”

I’m in no way trying to slight him, but let’s be honest, he is only here because of working with Cana and the fact Emi went. Not sure that is the same as most under 23 talents. They have to be scouted, (usually) trialled and then signed. Not sure so many have an “in” with a coach like Runner has had. Anyway, he has his chance and it’s now up to him what he makes of it – fingers crossed he’s up to the task.

If Emi has taught us anything it’s that we should never write off a player, even if they’ve had bad times at previous clubs. Emi had some terrible loan moves but is now a worthy number 1 at Villa and, some would argue, should be Arsenal’s No 1. Arteta is all about attitude and with the right attitude, players can progress without necessarily being the most gifted. Let’s let time be the judge of this one. Plus we have a good record with keepers. Fabianski, Szcz, Vito at Monaco, afore mentioned Emi. We could theoretically sculpt him into a really… Read more »

To put it perhaps more positively, he’s here because he knows Cana and had made a strong enough positive impression for Cana to stick his neck out to bring him here.

Cana hasn’t got much of a neck.

I think he’s being a little complacent. How many clean sheets have we kept across all competitions so far this season? Enough said. If/when he gets more chances, as he surely will, he’ll need a lot more of the other “C” word – concentration!

The rejected stone become the cornerstone..
Old wisdom but you can choose any outlook you want in life

Was impressed with his distributions. Fast and effective. Also caught the balls from corners instead of punching them out…

He’s way too small, we’re fucked if Leno gets injured

His listed height is 186cm. His about the same height as Kepa but taller than Pickford.

I know those aren’t good comparisons but there’s no point having a basketball player in goal if they move at sloth speed.

Daveo
Reply to  Salibaba and the Forty Thieves

Interesting you have picked one of the worst Keeper signings of all time and a guy that should be suspended for about half a season for one of the worst tackles from a GK I’ve ever seen as comparison to our lil’ Runner.

Anyway, back to your overall point 185-186cm isn’t really what you’d call small. The average height of males in Europe is 177.6cm, he has that well covered.

Crouch had a slight build

DeGea is a long streak of piss, but seems to get the job done.

Yes, his distribution was great and fast, which we could do with speeding up our attacks. I just don’t get why we tend to pass the ball back when we are on the break 4 on 4, or 3 on 4, attack.

I can bet thus would be coached out of him soon

Not really, We have the best GK coach in the world apparently.

Liked the way when he caught a ball from a corner he was chucking it straight out so we could counter. Leno is more of a ‘hold on to the ball and then roll it to David Luiz’ kind of guy

“Leno is more of a ‘hold on to the ball and then roll it to David Luiz’ kind of guy”.

Very funny and apt. But how would you describe Leno when Luiz isn’t playing?

I like players who claim the ball and distribute all in one movement. It’s very effective – always reminds me of Belgium’s winning goal vs Japan in the last world cup

I wouldn’t count on it, Kiddo! If memory serves, Dundalk had two chances (of sorts) in the whole game. Anyone who thinks that’s the “norm” in any competition is living in cloud cuckoo land. We have kept very few clean sheets this season and, regrettably, I don’t expect that to change much in the coming months. If Runarrson gets more chances in goal (which he almost certainly will do across a season) he’ll need to be doubly alert or he’ll be picking the ball from the net a tad too often.

Wait, are you criticising him for having too high an opinion of Arsenal? Would you have been happy if he had said: “well, this was an exceptionally easy game for me; I know my crap teammates usually allow a boatload of quality chances even against a minnow.”

Congratulations to Alex!
Can we sign Elneny’s son, Patrick, from Dundalk?

Good job to our new boy, time ll tell, he might be better than Leno someday.

It is almost impossible to see how he would respond if Leno was injured. He just looks too small to be a keeper, but maybe I am behind the times.

My worry about him would be his height.