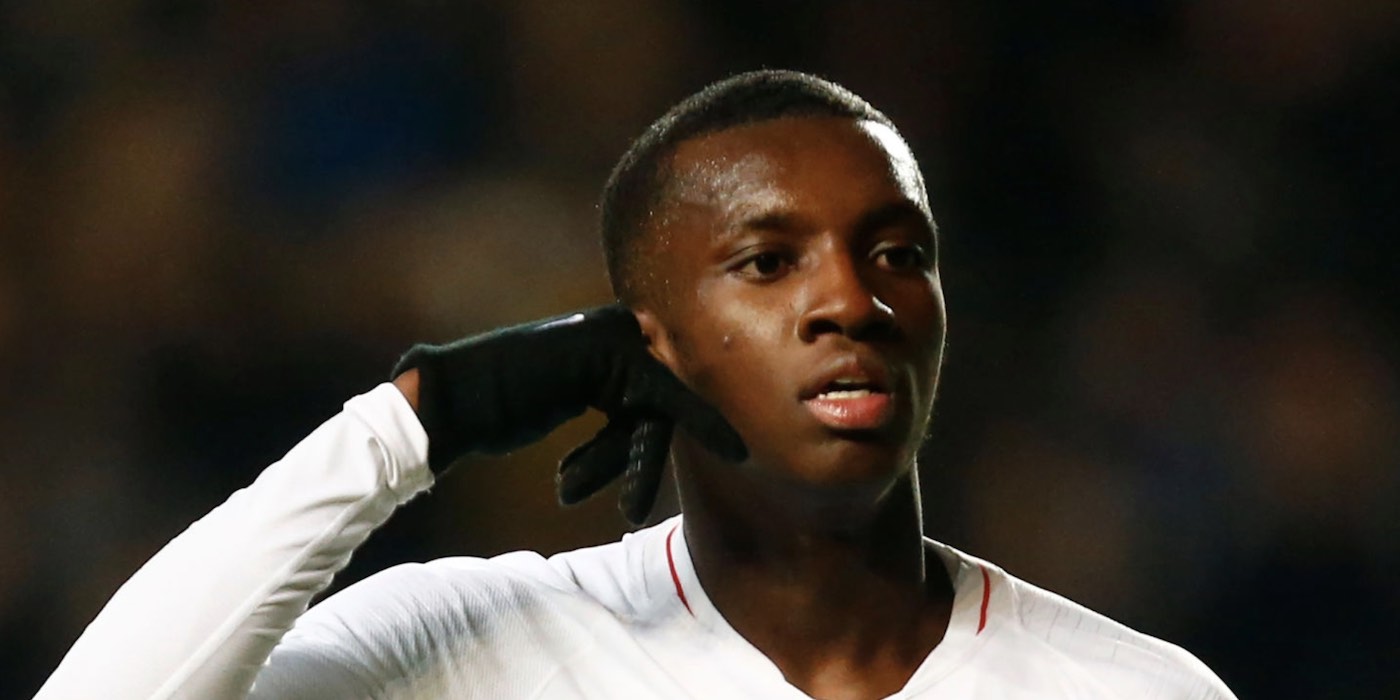 Eddie Nketiah has become England’s record goalscorer at U21 level.

The Arsenal striker went into tonight’s clash with Turkey having scored 13 goals for his country, level with former Gunner Francis Jeffers and the little-known Alan Shearer.

Despite missing an 85th minute penalty, Eddie had a late chance to break the record and did exactly that with a smart finish which you can see below.

Congratulations to him, beginning a great week for the 20 year old as he prepares to score a winner against Man City on Saturday.

If he continues in this form he could become a partey pooper!

This doesn’t make any sense.

I think it might be time for a Partey pun amnesty…

I abstained until now, let me have my obligatory pun.

AJD
Reply to  No foot Norbert

No, the partey’s over

Let’s hope he is more shearer than Jefferson at senior level!

Keep Lacazette on his toes

Just saying…staying on toes (or heels) was what caused his wretched form last season.

Nketiah can’t keep Lacazette on his toes cus he’s not good enough; he’s young, inexperienced and doesn’t have football brain.

Sometimes it’s better to keep quiet & keep people guessing about your intelligence than opening your mouth and exposing your ignorance.

Just like you talk with Emotions. Nketiah is not good enough period. If you like kill yourself. I would pick Martinelli over him any day. I see some Arsenal fans here let emotions cloud their judgement.

He might be a better player in the nearest future but now he’s not Arsenal quality. He should be on loan.

Not today you can’t as he’s still using crutches & hasn’t kicked a ball since March.

He is young and relatively inexperienced, sure. But doesn’t have a football brain? I’m not even totally sure what that means, but it’s wrong regardless.

And evidently he can keep Lacazette on his toes because Arteta has picked him ahead of Laca on several occasions.

I wouldn’t be that harsh on Eddie .. but Laca recently has looked like a declining curve and Eddie’s is moving upwards..

But Laca’s curve is still above Eddie’s and the gap remains frustratingly wide to watch them play at times..

Laca’s legs look heavy sometimes these days, and he needs confidence needs a kick .. but Eddie hasn’t offered too much apart from his pace and mostly tap ins (yes .. you still gotta be there and finishing them so not taking away any credit)

You are making sense, others are talking from emotions.

Looking at his finishing and positioning in the box, surely his main quality is that he has a ‘football brain’

Well done to Eddie, still very young with a lot more to come in a Arsenal shirt, under Miki we could have a young Vardy/Wrighty in a couple of seasons..

Eddie can be our homegrown-mercenary trigger happy gunner

He’s got a Wright good game.

Scenes at Wrighty’s house this evening

Can I just say…I feel really fortunate to be an Arsenal fan right now. I also get to read the well thought out and honest opinions of this blog. If only the rest of the worlds issues were at the place Arsenal and Arseblog are today.

Little known Alan Shearer..?. Epic!! Congrsts to Eddie! It can ONLY get better.

Apologies for being a Partey pooper but still not quite convinced about Eddie.U21 different gravy to premier league.Eddie willock Nelson just have to look at Saka to see what’s needed at the highest level and I believe he is younger than those 3 lads.Consistent performances at the top level has seen Saka overtake these boys.

U21 maybe not as hard as the Premier League but bloody hell dude, give the lad some credit he is now England’s all time record goalscorer at that level. That is some achievement, Bet you’re fun at parties.

It’s a great achievement yes but he does have a point. Owen and Rooney etc didn’t break this record because they went straight into the first team. This should hopefully be more of a fuel for Eddie to realise he needs to push himself to get to the higher level

He should have been sent on loan. The only young players Arsenal should have kept are Martinelli, ESR,Saka and Nelson maybe. I mean, Maitland Niles is part of the team already so I’m not including him. I don’t get the hype about Nketiah.

So you’re a big fan then I guess?

Eddie needs to start producing goals as a member of the first team, no one can deny that. He went on loan last season, so it’s time to find out if he can take the next step with us. If he can’t, give Balogun a try. There’s no reason to slate the kid, now is his time, just give him that. Is it too hard to wait and see how this all comes out or is your ego so important that you have to be the crystal ball specialist. No one gives a fuck.

Needs to step up a bit now, his postioning and close range finishing have brought some rewards for arsenal but I get a feeling he needs to offer a bit more now. With the squad lacking creativity, we need more than just his poacher instinct

I know he is still very young and raw, but if we are thinking of regularly playing him as Arsenal’s no. 9 that’s a big responsibility/opportunity.

That’s actually a big responsibility to entrust it to Nketiah, he’s still very young and inexperienced. I’ll continue playing Lacazette for the experience or adjust my formation or bring Auba back to the middle. Nketiah should be a sub or be used in matches where lower pressure is expected or match of less importance.

Agree with the last sentence. Eddie should come on after 65 minutes for Laca who still can’t play a full 90 and play the early Europa games and cups. That’s all he needs to do this year and score goals.

What we need is more through balls from the midfield to the forwards.

Only Saka looked capable of doing that last week.

Substituted against Sheffield Utd because he was making rubs yet no one was creating anything for him in the channels.

He’ll get better. Whether our midfield creativity does is another thing entirely.

*runs in the channels.

That was a great goal from an excellent build up. Congrats, Nketiah

Eddie needs to learn how to play with his back to the goal. Without that element in his play, he’ll never be anything more than a late game substitute.