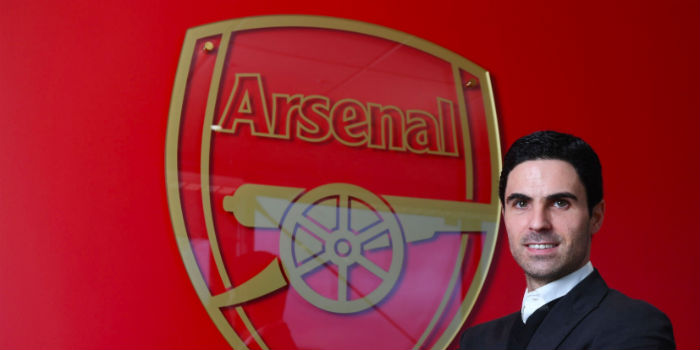 Mikel Arteta says he’d love to sign a contract extension at Arsenal but accepts he has to earn it first by pushing the club forward.

It’s 300 days since the Spaniard took over as head coach at the Emirates and his impact, on the touchline and away from the pitch, has been impressive.

Key squad members have been persuaded to stay, a clear playing philosophy has been adopted, silverware has been won and our new recruits hint at a bright future. All the while, Arteta has been exemplary in the way he’s conducted himself, handling the ongoing pandemic and the fallout from it with a steely determination.

It’s little wonder that the Gunners hierarchy decided to hand him more responsibility, promoting him to manager status last month.

Ahead of Saturday’s trip to Manchester City, Arteta was asked if he’d been given an improved contract alongside his title change. In his answer, he was quick to focus on the reasons for the decision.

He said: “No. It’s the way we’re moving our structure right now because we believed it was going to be more efficient. We made a lot of changes and we are still adapting.

“Things will evolve in the future even more regarding the needs that we have but we have a very clear idea of how we wanted to run the club and the right people that we need in every department to try to achieve what we are trying to do. We believe that was the right structure for us to work and move forward.”

As far as we’re aware, bonuses aside, Arteta is earning less now than he was at the start of the year after agreeing to take a pay cut like his players. Given the work he’s doing, we wouldn’t be surprised if the club looks to rectify that soon.

That said, if plans are in the pipeline, he doesn’t know about them.

“I don’t know [if I’ll be offered an extension],” he said. “We just finished the transfer window at the moment, but I can say that I’m really happy at the club and that I feel valued, I feel respected and very supported at the moment.

“My concerns are with all the work we have to do here, with the improvement we need around the team and trying to sustain the level of performances and get better.”

Pressed as to whether he’d like to commit for longer than the two and a half years he has left on his current deal, he added: “Yes, but I have to earn that. Now in football you have to earn it every week and things change really quickly, so we have to be on our toes.

“Obviously, it’s my responsibility to plan medium and long-term as well, but that’s with or without me.

“At the end, the time that I’m going to be at this football club will be related to how much I can move the club forward, improve the team and be a success on the pitch and get the values and the vision that I want to implement into this club as well off the pitch.”

Does he ever voice a sentence which can be wrongly judged or phrased ?

Agree entirely, I dread the day Barcelona or Man City come laden with a wheelbarrow full of cash.

Modern coaches tend to have a 3-4 year tenure.

What I find (as a Canadian), is that Arteta is now manager and coach. It doesn’t really happen in North American sports. Hopefully the decision to give him both roles helps keep him longer. He will only get better.

There will be a day when he is no longer the manager of Arsenal football club for whatever reason. Can’t obsess over what you might lose, enjoy him while he’s here.

Here’s to a couple of decades, and eclipsing Arsene as the greatest Arsenal manager.

In Arteta, we genuinely have a world class manager in the making, albeit a wonderkid with his relative inexperience in the manager world.

Things can really change so quickly. One day it’s the closing window, the next questions about the manager’s future. Such is life. Wish him nothing but the best with us.

Yeah, this is so true. A bad run in January and people will start talking a lot about his inexperience…

There is no more important signing than this. Sign him up now, 5 years minimum.

We’re so fortunate to have him and I hope the owners do whatever it takes to keep him long term. I’m still not clear, however, as to what type of playing style Arteta wants to implement. He has had to adjust the playing style with the talent (or lack of) that he’s inherited. And he’s changed the style a lot depending on the opposition. But in general he strikes me as more of a power football a la Klopp than a tiki taka manager.

I believe he wants a fusion of the two– tiki taka and gengenpressing a la heavy metal.

If an idealist manager is one with unchangeable idea of a style his team SHOULD play, then Arteta is more a pragmatist than an idealist.

Yes, he has a clear idea of the style his team WANTS to play, but he isn’t averse to employing a different style if the circumstances demand it.

Just bend me over and shove a lego hair piece in me back pocket, love the geeza, trust the geeza, and we will now probably lose 6-0 against shitty because I’ve given me heart to el lego! UTA…

could you be any more impressed by this guy?

He seems to always know what to say

Give him a second contract, you shit!

Come back out Mikel, and carry on managing.

He has a good head on his shoulders, Arteta.