THE LOWDOWN
Arsenal play their third home North London derby in under eight weeks with Tottenham visiting, this time in the Conti Cup group stages. It’s the final match of the group stage and the ramifications are somewhat confusing for both teams. Elsewhere in the group Chelsea have already beaten Spurs and Arsenal at home and face London City Lionesses away in their final group game.

A London City Lionesses win would represent one of the biggest upsets in women’s football history, so we can assume that Chelsea are going to win the group. From the six groups, the six winners will go through alongside the two best runners-up- but here is where it gets very complicated. There are only 23 teams in the top two tiers of women’s football, meaning one of the groups has only three teams.

Up next for The Arsenal? 🔜

Only results against the first and third placed teams in the group will be counted when considering the two best runners-up- meaning Arsenal and Spurs’ respective London City Lionesses results will almost certainly not be counted. So Arsenal are effectively starting this game with a goal difference of -3 due to their 4-1 defeat at Chelsea last month.

In order to finish as one of the two best group runners-up, Arsenal are going to need a big win to qualify for the quarter-finals. The added complication is that kickoff times for the final group games are not synchronised, there are some games to be played on Thursday evening. Even if Arsenal do manage a big win, their qualification cannot be confirmed for at least 24 hours after the final whistle.

TEAM NEWS
Arsenal are still without Jen Beattie, Jordan Nobbs, Steph Catley and Noelle Maritz, Viki Schnaderbeck was also missing from the Chelsea game after hobbling out of the defeat at Manchester United. Lisa Evans was an unused sub for the Chelsea match after several weeks out with a calf injury.

Joe Montemurro might be tempted to give Lydia Williams a debut in goal, the Australian has been fit for a number of weeks but, having not played since February, it’s likely the manager was reluctant to throw her into a bigger game. Montemurro will also assess whether Kim Little and Jill Roord are capable of starting again after playing 90 minutes on Sunday.

LAST TIME OUT
Arsenal have played Spurs at Boreham Wood twice already this season. In the FA Cup, they won 4-0 thanks to a goal from Jordan Nobbs and a hat-trick from Lisa Evans. Last month in the WSL, the Gunners were 6-1 victors with Vivianne Miedema scoring a hat-trick and additional goals from Katie McCabe and a brace from Caitlin Foord.

The moment @VivianneMiedema made @BarclaysFAWSL history! 😍

Watch the full highlights from the #NorthLondonDerby 👇

PLAYER TO WATCH
Danielle van de Donk was an unused substitute against Chelsea on Sunday, meaning she will almost certainly start this game. The players will understand that a bigger squad will mean greater competition this season but having been replaced 61 minutes into the United defeat and then not played against Chelsea, DvD will be chomping at the bit to prove herself once more. With Jill Roord and Kim Little unlikely to both be played in this game, van de Donk will almost certainly slot back into midfield as a number 10. 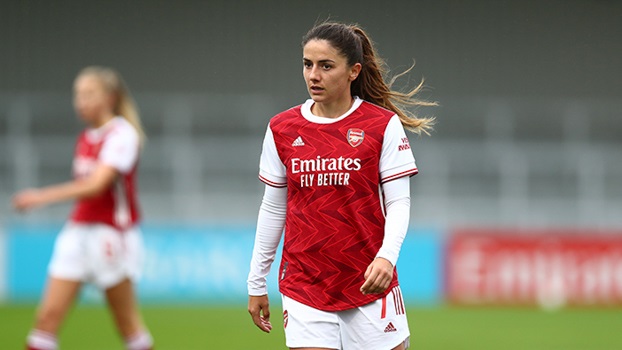 THE OPPOSITION
Spurs are yet to win in the WSL this season and threw away two points at Bristol City on Saturday evening after conceding a stoppage time equaliser. The principal issue for Karen Hills and Juan Amoros has been scoring goals- Spurs haven’t scored from open play in the WSL. That said, Siri Worm’s setpiece delivery has been an excellent weapon for Tottenham.

Spurs managed to hand a first start to Alex Morgan on Saturday after she gave birth in April. Morgan was replaced after 45 minutes in a pre-planned move, it remains to be seen whether Spurs want to start her against Arsenal on Wednesday evening. She will have two and a half weeks off after this game given that she has not yet been called back into the USA squad.

💥💥 Two goals in two games for @AshNev10 – we got her full-time reaction to our draw with Bristol City on Saturday. #SpurHerOn ⚪ #COYS pic.twitter.com/KwMlCfEeUd 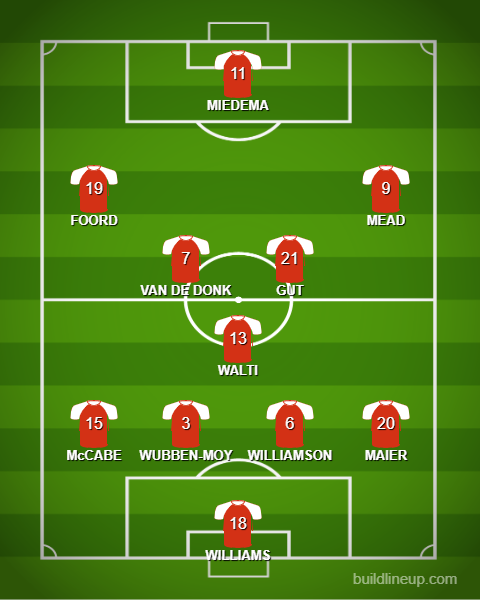 HOW TO CATCH THE GAME
This game will not be streamed or broadcast. The cost of streaming games is loss-making and there will be no avenue to watch live. The full game and highlights will be posted to the FA Player on Thursday morning. I will be at the game and you can follow me on Twitter @Stillberto and I will do as much as I can to keep you up to date!

COMING UP
We will have exclusive match reaction from Joe Montemurro on the site shortly after the game on Wednesday evening. We also have an exclusive player interview going out during the international break as well as a new Arsenal Women Arsecast.

“The cost of streaming games is loss-making and there will be no avenue to watch live.”

Funny that this is the only game being played behind closed doors. Maybe Spurs are afraid of a public beating….COYG….

The Conti Cup is strange all round and just made more incredible by this seasons assymetric arrangement!
If I was a Bristol City representative I would be appealing to the FA for forcing the team to play Man City away in WSL with 5 players unavailable due to Covid isolation when apparently the Birmingham vs Leicester Conti Cup tie is being rescheduled for the same reason!
Seems like our governing authorities are a shambles, or worse!

The pretence that the FA really gives a sh*t about women’s/girl’s football is hot air.
Girl’s academies locked down, Boy’s carry on. Must have missed the bit where the medics think girls are more of a covid carrying risk than boys.

I don’t even know why they play a Conti Cup. It seems a completely superfluous tournament. Otherwise, there is no such thing as a quick injury recovery when it comes to this team.

Jordan Nobbs has been unavailable for weeks. Suddenly, she’s part of the Lionesses squad for the upcoming international break. What’s happening there?

England don’t even have a game it’s only a “training camp” for a manager that will be gone in a few months anyway.
Totally pointless and stupid in the current rampant virus climate!
I hope our girls all pull out and stay at home.

Pointless and stupid is the new “bright idea, let’s do that!”