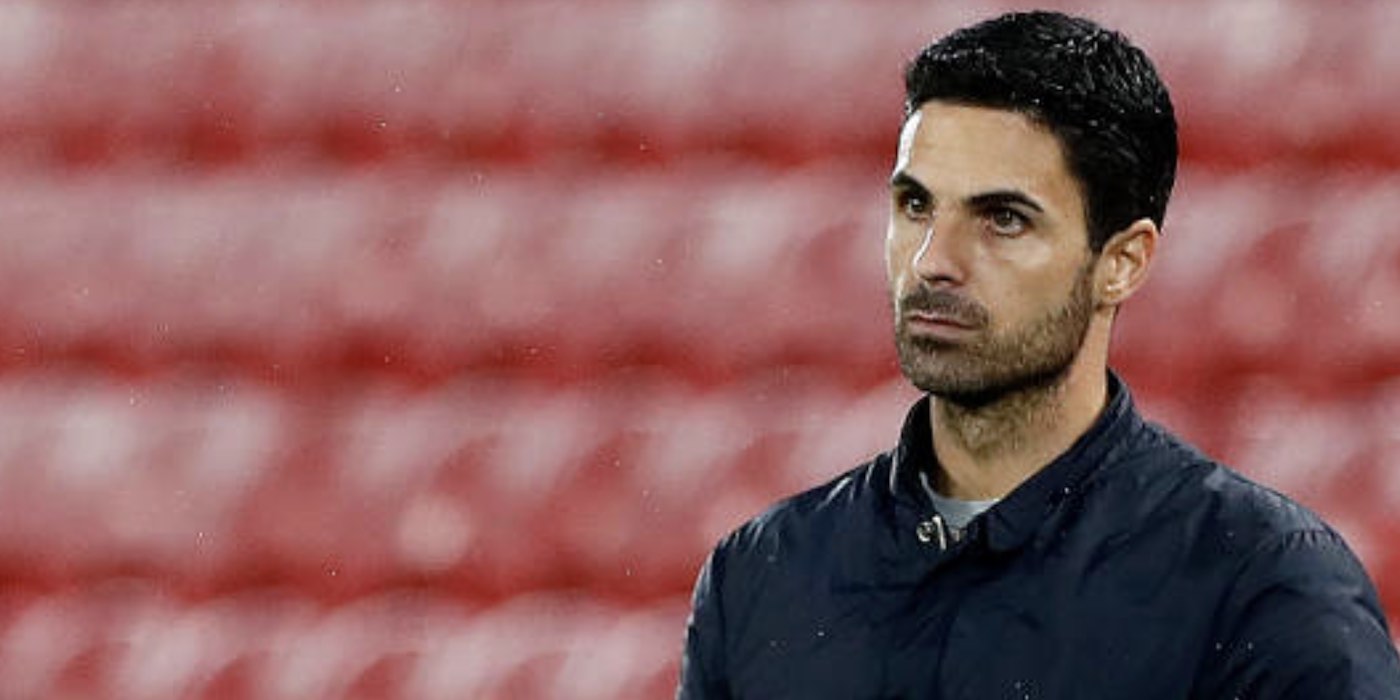 Mikel Arteta believes his Arsenal project is suffering because of a disconnect between players and the fans caused by the ongoing pandemic.

Emirates Stadium has been empty on matchdays since the Spaniard was diagnosed with Covid-19 back in March and he’s concerned that his squad haven’t experienced the highs and lows of the last eight months alongside supporters.

The boss seems particularly concerned that his stars, who’ve won a couple of trophies but continue to wobble in the Premier League, aren’t able to build momentum by feeding off the energy of a motivated crowd and vice versa.

“It is definitely affecting the players,” Arteta told Arsenal.com. “Now, for example with the lockdown: you win at Old Trafford, you feel excited, your adrenaline is really high, you go home and you want to celebrate, you want to do something, but you just go home, by yourself – some of the players live by themselves – and you go home, sit on the sofa, and that’s it.

“To find that purpose and say, ‘Okay, I work so hard for this moment, I want to enjoy it, I want to have people around me’ but you have nothing, so it is a completely different life.

“In our case, when you try to build a new project you need to engage the fans with the team. They have to see live what the team is transmitting. It is completely different on the TV, you are not able to do that.

“Without creating that chemistry between players and fans, for them to believe, for them to see live what we are trying to do, it is complicated. We need that. The players have to feel, ‘Wow, these guys are really behind us, they are really pushing, they are liking what we are trying to do…I feel more motivated, more engaged, I want to participate’ – and we are lacking that.”

To be fair, Arsenal isn’t the only club struggling without fans. Home advantage has gone out of the window this season. According to Footystats.org, 44% of Premier League games this season have been won by away sides compared to 37% by home sides. Alongside that, away goals are being scored at a rate of 1.67 per game compared to 1.47 home goals per game. For comparison, in 2018/19 – the last full season uninterrupted by Covid – home sides won 48% of the time.

Having originally been pencilled in for October, it’s now not clear when fans will be allowed back into stadiums in England. The country remains in a state of near-lockdown until early December and there’s a fairly high chance that could be extended right up to the Christmas period.

Yesterday Culture Secretary Oliver Dowden hosted a 90-minute ‘virtual future of football’ summit that touched on the subject. While there are some suggestions fans could return to some grounds in lower-risk areas before Christmas, it seems unlikely this would apply to top-level sport.

TBH, with the way we’re playing he should be thankful fans are not allowed in.

A P
Reply to  Fayed

He is just buying time. Lack of fans didn’t affect Leicester and Villa.

Is it my imagination or have we been around this particular course once before? Yes, it’s unfortunate that the fans are missing – as a season ticket holder, I know – but everyone is in the same boat, aren’t they? It looks to me a little desperate to blame our current position, in part anyway, on something that effects every club. If we were in the top three or four places, would anyone be talking about lack of fans? I doubt it. Arteta and the players need to just get on with it and address the (now) obvious problems the… Read more »

A is for Arsenal
Reply to  Biggles

He’s not saying we’re an exception, though, or blaming that for poor performances. He’s just saying it’s different and players would find it more satisfying to have a better connection with supporters.

Reality check
Reply to  A is for Arsenal

“He’s not saying we’re an exception, though…”

He is implying it though. Don’t think he was watching what fans did to Emery and Xhaka. Losing to Leicester and then to Villa and the manner in which we did, fans wouldn’t think twice giving him the Xhaka treatment.
If fans being there has no competitive advantage or has any effect on the performance or results than what is his point?

It’s a non story really isn’t it? It’s a situation that applies across the board to all clubs at all professional levels in the UK. Nothing wrong with him discussing it but any point that is inferred or interpreted is moot.

I think when you are trying to build bridges with your fans after a particularly turbulent time with 2010’s Wenger and then Emery, it’s imperative that you have weekly contact with them. Teams like Liverpool, Leicester, Wolves… have a tight fanbase that all think their team is doing great. It’s easy enough to maintain unity as a club. But Arsenal has been infamously fractured for years now. And after an FA cup win and some positive moments under Arteta, I think he is bemoaning the lack of galvanising there has been in the team / supporter relationship. I just hope… Read more »

You can blame part of that on Gazidas’s proclamation that Wenger would be in charge until the fans said otherwise (not based on results) which lead to real frustration as the club had so clearly stagnated. As you say the vast majority of fans support Arteta & we also have benefited from the lack of fans in that away games have been much more like neutral venues which has benefited us given our inability to consistently perform away from home. This is a big year however for Arteta as we really can’t afford another year outside the CL as the… Read more »

Some sort of positive feedback and show of love would be useful though. For some reason Arsenal fans tend to err on the toxic side, as much as I hate to admit it.

I follow the Arsenal facebook site, and the comment section is a cess pit of stupidity and hate. It makes me ashamed. I looked at other facebook official sites like Man Utd’s and Spurs’ to see if the situation is the same – it’s not.

The same Utd fanbase of which some members launched flares and projectiles into Ed Woodward’s house. Not toxic at all😂

The Spud fanbase who agreed with Moaninho the Toxic and called for Danny Rose’s contract to be terminated when he was returning from a long-term like Bellerin?

Are you even aware of how many Manure and Spud fans live in the AFTV comment section?

Not sure why Arteta would bring this up. One could also argue having no fans simplifies things as well. His on the pitch player micro-management is infinitely easier (although it’s debatable whether players actually listen). And fans can be a double edged sword- when things don’t go well, they aren’t always encouraging.

Vaccine is around the corner. Looks like should be available for masses by February.. so fans should be in by March

Ah, the magic vaccine that is distributed to the world in the blink of an eye and work with 100% accuracy and 0% side effects. Back in the real world things are a tad more complicated, and infinitely more politicised.

I’m vaccinated and so are my kids. So politely as you can scurry off…

Timorous Me
Reply to  Daveo

There are absolutely legitimate concerns, and it’s definitely going to take time for the vaccine to be distributed.

That said, considering the long, long run of what feels like never-ending bad news, we should also celebrate (to some extent) positive developments, like the very good results coming out of recent vaccine trials and the study showing that immunity likely will last for several years, if not longer, for most who get the virus.

Johnny 4 Hats
Reply to  Timorous Me

I agree with almost all of this rational and well considered statement.

But apart from that, you’re bang on.

Of the physicians I’ve talked to, none are going to get it until we see the results being published. There are real concerns of safety with it being rushed through. As someone who gives vaccines all day long I’m very pro-vaccine but I’ll sit this one out until we have more evidence. It’s possible this is just anti-trump hysteria, it’s hard to separate that out entirely.

“Some of the players live on their own and go home and sit on the sofa”………. and then of course there are those that skip off to Dubai

arteta is a smart man, especially when it comes to language.
that sentence is sure to be loaded.
im left wondering if I want Willian to have disrespected Artetas faith in him by him playing aweful and then jetting off to dubai. Leaving no choice but to drop him.

but that would mean mikel being undermined by a new highsalary signing from a rival, which is bad in itself.

Bollocks!!! Using the fans as an excuse is terrible. When will intelligent people understand that we are not the only fking team dealing with Covid, too many games, in juries, no fans, and financial issues. We lost to Villa because we were awful and they were up for the game. If we had fans that day, they would be cursing Willian, booing Arteta. We are lucky there are no fans to hurt the feelings of our soft and delicate players.

Sorry I have to explain my down vote. It’s just because you disagreed with Mikel and I like him. Otherwise I hate excuses too. I will even go to the limits in his support till he gets it right. If anyone had told me Unai simply had to play Aubameyang central and everything would he ok or just start playing Willock I’d have brought the rope to hang them because he had to be judged on what he was delivering and not hope they try something new. We are a cup team and will be solid in the league. Good… Read more »

All this tells me is that the players miss the celebrity side of football and the adulation that comes with it. They are realising more and more that THIS IS A JOB. You come into work, you are being paid like royalty to work until you cannot physically give anymore, then you go home. That’s the reality. The celebrity adulation should come from how well you are doing that job. It shouldn’t be that you only do well when you get the unearned worship. What this pandemic does is show the players truly motivated for the cause and the ones… Read more »

Salibaba and the Forty Thieves
Reply to  G-Man

This is actually a brilliant take. It would explain why the younger less established players at Arsenal appear more motivated on the pitch.

Ouch, The Alan Parson’s Project really took a beating in this comment.

Thank you. This was great.

He needs to quit talking, if you need fans to get your players engaged why are we paying him?
Strong emery vibes as the word sandwich suddenly taste like crap.

All teams face the same predicament.

Arsenal fans will continue to invent excuses for Arteta as the team continues to slip into mediocrity through a series of mis-steps over many years, chipping inexorably away at our once technical advantages on pitch and soon our coffers.

The lack of crowd seemed to play to our advantage at the end of last season. It is more a case of players not performing and questionable signings.

Some bumps in the road are expected with this side, but Willian, Soares and Mari all looking highly questionable big money investments.