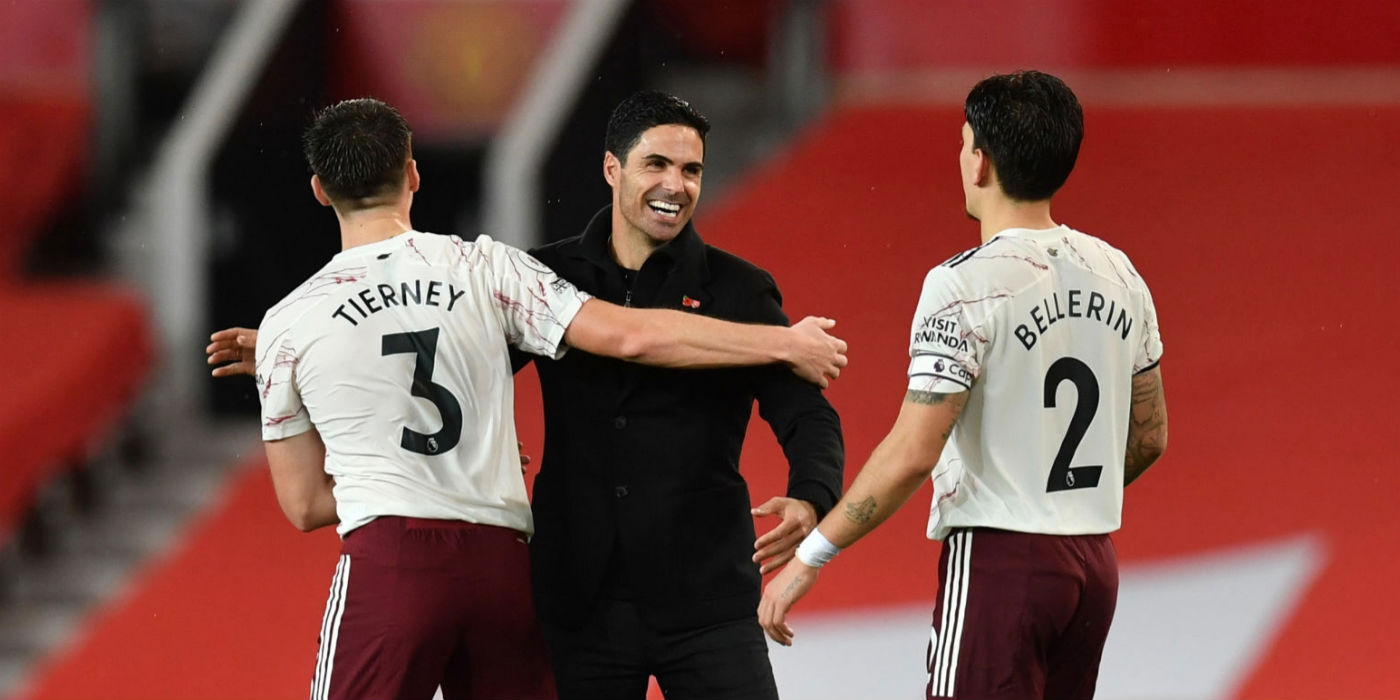 Mikel Arteta says Hector Bellerin is growing in confidence now that his body is allowing him to perform more consistently.

The right-back, who last night earned his first call-up to the Spain senior squad since 2016, has been one of Arsenal’s best players this season making four assists in 10 appearances as part of the Premier League’s tightest defence.

Having undergone surgery on his ACL in January 2019, it’s been a long road back to top form for the 25-year-old – something he admitted back in September – but his boss is pleased to see the recent progress.

“I think when you have a big injury like that it can take almost a year for your brain to reset and accept that injury and biomechanically become the same player,” said Arteta.

“After that you have to recover and rediscover those performances, that consistency in the minutes you are able to play, which is something he has struggled with in recent years, but when something starts to get more natural, you start to get the flow.

“He is more confident, he is playing regularly, he is able to do more things, he ends the game in a much better way physically and he recovers better. What happens, happens, but his performances are getting better and better.”

Bellerin’s close relationship with Arteta goes back a long way. The full-back has mentioned previously that his compatriot was ‘like a father to me’ when they joined Arsenal within months of each other in 2011 and that friendship looks to have played a part in Bellerin’s decision to stay at the club this summer despite interest from PSG.

Having been in a state of flux for a couple of years, Arteta believes the club needs players like Bellerin who have long-standing ties and have experienced both the highs and the lows.

“Yes, absolutely [it’s important],” said the boss. “As well as that it is about the characters we need in the dressing room and Hector is a key figure in that, in my opinion.

“He is a player who has special feelings towards the club because he has been here a long time and he is very grateful for all the coaches, the staff, the club and the fans have done for him.

“He is always willing to pay that confidence back, that respect back and that loyalty back. It is something you need in our dressing room because at the end of the day that is the habit of this football club.”

Arteta: We have to put the ball in the net

That’s what we all want to see. His call up to the senior Spanish squad will help his confidence as well.

Have you seen what he wears? Don’t think confidence is an issue for young Hector…

Well, his sartorial choices aside as I’m certainly no judge of that, I’m pretty sure that after an injury, you do need your confidence re-building, step by step. Performance on the pitch is most important obviously, but being called into the Spanish side again will be another boost. Seems logical, clothes aside.

I like that you always give rational answers to my jokey comments Biggles.

I think you must be a very literal person. If you went to a stand up comedy night, I imagine you’d be on google fact checking the comedians.

“It seems highly improbable that your momma is so fat when she cuts herself gravy pours out as said gravy would be metabolised by the acidic solution in the stomach lining as apposed to entering the blood steam….”

Thanks. I like to be rational … it beats being irrational, I think. That said, with your sense of humour you should be on the stage – one leaves in ten minutes. Boom, boom.

I used to sit next to this guy at the Emirates who was formerly on The Bill. You’d recognise him. Eric Richard was his name. Anyway, he was a right grumpy bastard. I remember once him shouting “fuck off back to Spain” at Cesc when he missed a penalty.

I’d genuinely love to come and sit next to you once we are allowed back in. I’d like to compare and contrast!

a fabulous conversation. thx to both of you. a rare thing in the net these days.

Now lets smash Villa with a convincing performance and scoreline. It’s been too long since we’ve really turned a team over.

I’d take the ball trickling in off Laca’s right bollock for a squeaky 1-0 to the Arsenal.

Yes, so would I but we won’t progess too far relying on that. Sooner, or later (well, sooner really) we need to start knocking goals in on a regular basis. The opening game aside, a strike rate of a goal a game isn’t anywhere near good enough (unless you have a rock-solid defence, which we don’t – although it has improved). Hopefully, the Villa game will end the drought.

I agree 100%. Winning is top priority of course, but winning “well” is a close second now. We need to score more goals as we obviously aren’t in any number on a regular basis. That just isn’t good enough (and won’t get us far in the long run). Three or even four (well, you can dream can’t you?) against Villa would do the job nicely. It would provide confidence and momentum after the Man Utd and Molde wins. I don’t really see it happening (not today, anyway), but you never know – it’s a funny old game etc.

Spot on analysis on the duration of the stay at the club. Hector is Arsenal through and through, and we don’t have so many experienced players of whom the same can be said.

For me… All I know is..
If lacazzette nd willian start together today ….am not watching the eyesore …
Peoes got to start for God’s sake…
Bellerin hope u continue the impressive form

Off-topic:
The Dortmund vs Bayern yesterday was a much better spectacle than the ManC vs Liverpool game, till the half-time break anyway at the time of writing.

While both were 1-1 at HT, the former, seemed more action packed, even though it was 0-0 much longer.

Wonder if we’d have any shot at landing Haaland. It’s wishful thinking but good god he is a special talent.

This article didn’t age well. I still love Hector though and hope he comes back from Spain duty refreshed and ready for the matches ahead.

It’s nice that he is improving but he is not good enough to play for the team anymore. His one great attribute was his speed and that has deserted him. He still can not cross a ball propperly And he always cuts into the middle where Pepe or Willian need to be, not him . His job us to stay out side and add with and he does that poorly. Defencively he is still a mess . His position is one of 2 that need to be ,improved by new signings, the other is a creative midfielder to play #10.… Read more »