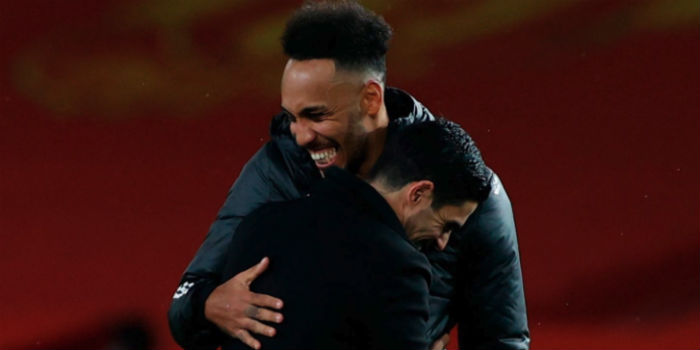 Mikel Arteta says his players can call him whatever they like, dismissing suggestions by Roy Keane that he’s being disrespected when they don’t refer to him as ‘boss’ or ‘gaffer’.

Working as a pundit for Sky Sports on Sunday, the Irishman – who was in a major grump after watching his former side get beaten by Arsenal at Old Trafford – took umbrage with club captain Pierre-Emerick Aubameyang referring to Arteta as ‘Mikel’. His actual name.

“They didn’t show him respect when they called him by his name Mikel,” he growled as smoke whistled from his ears and his face went puce like a constipated toddler. “He is the manager, the boss, the gaffer. That’s respect. Not Mikel.”

Ahead of the Gunners’ Europa League clash with Molde on Thursday, Arteta was asked about Keane’s comments and whether it was an issue that concerned him.

“No,” he said, “I was told that Roy [Keane] mentioned that. I don’t know. I think it’s something very particular [to him].

“I give them the choice to call me whatever they are comfortable with. With some of them, I obviously shared a dressing room and for me, I don’t feel disrespected.

“I understand why he’s saying that as a [former] player, but I feel so close with them, some I even played together with them, so for me it’s not the way I’d feel respected or disrespected.”

Arteta also made clear that the players with whom he shared a pitch at the tail-end of his career – Calum Chambers, Mesut Ozil, Emi Martinez, Hector Bellerin and Mohamed Elneny – were quick to adapt to a changed dynamic in their relationship. That said, it did play on his mind before taking the job.

“Well, it’s something that before I joined I was a bit concerned by but at the moment, I’m not.

“It’s not just something that has to come from me, it comes from both parties, they both have to understand, respect and go about the relationship in the same way [as me]. To be fair, they made it really, really easy for me in that sense.

“Obviously, the feeling I have for them, that won’t change whether I’m on one side or the other. At the end, we’re part of the same thing. It’s not been something difficult, I have to be honest. It’s not been difficult to manage.”

We hope Roy is able to digest the above without choking.

I quite like Keane, but let’s be honest, he always has to have something to moan about.

You quite like a guy who could start a fight in an empty room? I think he’s an absolute cunt who has ended players’ careers.

I am entitled to my opinion, as are you, and I think he’s okay.

absolutely, you are entitled to your opinion, as are we to ours, including showing our displeasure of your opinion.

Opinion yes. Facts no. And the fact of the matter is Roy Keane is a big, smelly cunt.

The Box
Reply to  Wut

Then there’s also his bad side.

Him, mourinho, trump, they’re all cut from the same cloth.

Attention-seeking dickheads who thrive on their little controversial opinions getting noticed to satisfy their gross insecurities.

I’d send them to Mars tomorrow, or the nearest black hole at that.

Venus is the better option. I’m sure they’d enjoy the heat

Is he really serious? If Mikel is fine with it……

Is this the same Keane so well known for his respect towards…well anyone, plus his immaculate sense of teamwork? I mean the man is just the role model we’re all looking to for a profound take on the concept of respect.

Roy Keane can go fuck himself! He’s very lucky it’s not PV4 he’s contending with here. Mikel is so nice to him.

He wasn’t fit to lace Vieira’s boots, and he knows it.

Wow. Imagine, Keane spouting off on something he knows nothing about. I’d be more concerned about the disrespect shown by United playing like a Championship side.

He can motivate himself but has no empathy whatsoever. I can’t imagine why he’s been such a shit manager……

Maybe Roy Keane would like to comment on what it means when people call him a cunt?

It means they are telling him the truth.

Never thought I’d defend Roy Keane of all people, but I watched the segment live and you can tell he was saying it tongue-in-cheek. That’s not how it’s been reported so will chalk this up to the media trying to make a story out of nothing.

Keane’s just a wind up merchant, can’t believe people don’t see that. Meanwhile in these comments he’s been compared to Donald Trump and Josef Stalin.. I hope they’re taking the piss too!

I had the same impression, it was pretty clear he was playing on his persona to make a joke

I watched it live too, he was deadly serious and the reason was i think, because his team were made to look so poor. Arsenal were so much better and it was obviously difficult for him to say that. He just concentrated on the poor showing of ‘his team’ so he would not have to praise ours.
Even Neville praised Arsenal but Keane found that difficult. I think he used the ‘Mikel’ thing to deflect away from praising Arsenal.
Personally, i don’t see him as a credible pundit, he is far too bitter and twisted to be taken seriously…

Rewatch it again, if you can, and wait till the very end where Jamie Redknapp asks him how he can say that with a straight face. It was obviously a joke but people are letting the media wind them up

I generally agree with all the write up… Except the last sentence; not that I wish him ill😉

I’d like to take the opportunity to congratulate Istanbul Basaksehir on a thoroughly deserved victory. Well played!

Meh!!! It’s just Keane not being able to take defeat as always

The box
Reply to  Stephanie

Tim Cahill did a fairly good job on him I thought.

Not-Manchester Evening News: After victory over Manchester United away, Arsenal leave disastrous storm in Roy Keane’s teacup in their wake.

A non-story story. There are more important things for Arsenal FC and Gooners to think about right now.

I watched Roy Keane on Sky Sports, I cant take him seriously, Mikel has transformed this squad, the defense is excellent, Gabriel and Thomas Partey were super against United, Mo Elneny, Rob Holding and the squad played very well. We are getting close to dominating games and going back to the old days. I’m sorry Roy, United should have got Zidane when he was available. Also, I listen to critics of managers, who have won back to back titles as managers. You have nothing to show.

Call me what you like, just don’t call me late for dinner! Boom-boom!!!

Seriously, welcome to the 21st century Roy, calling your manager by his / her name is hardly an earth shattering revelation.

Bloggs, you sure you don’t want him to choke? I mean just a little bit of course. Nothing life threatening.

It’s an interesting comment ( intentional or not) , by Blogs, that deep down Keane knows that Ollie will never cut it . He sees all the palsy walsy stuff between Ollie and his players and visa versa, and he hates it because the Utd players are milking the relationship and are in a comfort zone that the manager can do fuck all about it. Keane is jealous ( and perhaps even somewhat impressed) that Mikel is not respected by name but crucially, IS, respected on the pitch. Call me what you like , says Mikel to his players, but… Read more »

After his comments it’s no surprise he sucked in being a coach/manager.

Roy (cunt) Keane known as the model of professional deference to everyone he has ever interacted with during his career!

Someday would love Roy Keane to be called upon for a grand ceremony where they unveil the statue of the most meanest
and decorated midfield player and a great leader to ever play in the premier league.
Pulls the cloth and there it is Patrick Vieira cast in bronze.

Now that is what that cunt deserves

Someday would love Roy Keane to be called upon for a grand ceremony where they unveil the statue of the most meanest
and decorated midfield player and a great leader to ever play in the premier league.
Pulls the cloth and there it is Patrick Vieira cast in bronze.

No disrespect, just the TRUTH

Imagine back in the days a team plays a narrow diamond of keane, vieira, savage and davids with cb pairing of keown and stam, jens as keeper. Lauren right. Ibra up top. This team would skip breakfast and just eat opponents instead.

I’d just like to see that lot rounding on Philip Don or Paul Durkin for a bad decision….

Every time I see Roy Keane, I always think back to Vieira winding him up in the Highbury tunnel and my love for Paddy deepens just a little bit more.. 😉