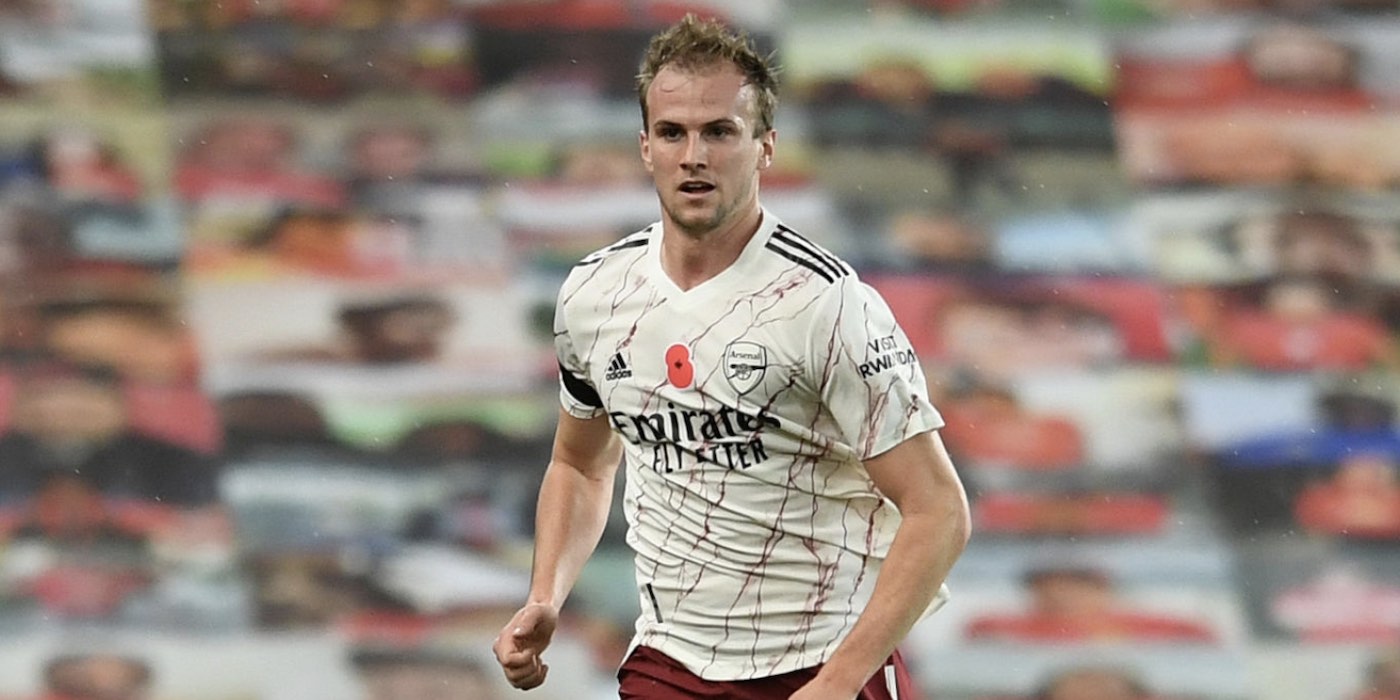 Mikel Arteta has praised Rob Holding’s determination after the defender came back from injury earlier than expected to help Arsenal win 1-0 at Old Trafford for the first time in 14 years.

The 25 year old slotted in alongside the hugely impressive Gabriel, less than two weeks after tweaking his hamstring in the warm-up before the Man City game.

His willingness to push himself drew praise from the manager, who said afterwards, “I think he had one [training] session. We didn’t expect him to be back so quickly, to be fair.

“Thanks to the medical staff for the work that they’ve done, but that’s the culture that we’re trying to create.

“Rob has this determination and he’s willing all the time to play and improve and work hard. He put himself on the line when we needed him and it was an incredible performance.”

With the Gunners juggling European and domestic fixtures at the moment, there’s a need for some squad rotation, but after a big win, Arteta is pleased with the response from the players he’s calling on, and hopeful it will generate further confidence among them.

“It generates the belief and it binds everyone together,” he said.

“Everyone’s going to feel really part of it because players who haven’t played so many minutes in the Premier League until recently will be involved.

“Everybody has to be ready and if we want to perform at that level, we’re going to have to use this squad. The fixtures are crazy at the moment and the physical demands are huge.

“Everybody has to be contributing and focused on what they are bringing to the team. That’s the question you have to ask of yourself.

“It’s not just on the pitch, it’s off it as well and in training. We’re looking at what you can bring to the team, how you can help and how you are contributing. I’m really happy with the team.”

I can’t remember the last time we had conceded the fewest goals in the PL, long may it last. Just need to start scoring a few now!

You’re right, but we mustn’t overlook in the celebrations of yesterday’s terrific win that we have nevertheless still conceded on a regular basis this season. We need to make the fine defensive performance against Utd much more of the norm. Hopefully, at the other end the goals will come – as you say. We’re not into double figures yet (three of those in the opening game), and only Wolves has less in the teams above us. That’s pretty anemic and a little puzzling given the scoring “potential” there is. It may be partially down to confidence so we’ll see what… Read more »

Arteta sorting out the defense first. He needs continued support from the board to sort out the attack (ignoring Auba on the left part for this).

Auba on the left will work so much better when we have a proper false 9.

Yeah, I think this is definitely true. Aubameyang has been a Golden Boot winner from the left (nearly twice!), he’s clearly very dangerous in that role. Additionally, I think many are discounting what Lacazette brings to the team off the ball–and I’ve been playing defense for him for a while now–but it’s pretty obvious the guy’s form has fallen off a cliff since the restart. He looks so clumsy on the ball. It doesn’t stick to him like it needs to, passes straight at opposition defenders, etc. There’s a player in the there, but we haven’t him for a while… Read more »

The trouble is, Eddie seems to offer almost nothing other than willingness and 6 yard box poaching.

Agree. The best team won Sunday but we never looked like scoring from open play.

We had 2 chances, Willian and Saka, were that not likely to be open play goals?

great stuff from Holding, who was on the verge of leaving on loan. Strong character and would love to see him return to his pre-ACL form.

I honestly think Holding is pretty average at everything but does enough, competes and doesn’t make a lot of mistakes. There must be a level of confidence in him from team mates too as his inclusion never seems to rock the boat.

Long term I’d say we need an upgrade but he’s a great player to have in the squad.

I particularly liked his gamesmanship, going down with ‘calf strain’ on 75mins. It really killed Man U’s momentum.

Had to distract myself with mobile legends when Mustafi was subbed on for the last bit.

I left the room

Yes, we never know for sure which Mustafi we’re going to get – although, overall, it’s more likely to be the error-prone one. However, he (and we) survived at Old Trafford. Despite some recent improvement I still think most Gooners will watch/listen happier without the knowledge that he’ll be starting or coming on during games.

This was my fear

The last 10 minutes was not fun

If you had played Saliba he would have had to put himself on the line.

We bought Gabriel and Arteta put him straight in and he hasnt looked out of place.

We bought Partey and Arteta put him straight in and he hasn’t looked out of place.

He puts his faith in Saka and he hasn’t looked out of place.

So…Could we have a little faith that the coach who sees Saliba every day in training and has been around him at the training ground maybe knows a little but more about Saliba’s readiness to play at this level?

Hold the line, I ain’t waistin no more time

Has a mean streak that’s loveable if he plays for your team.

Think he can get better at decision making in our initial build up. Tends to get caught on the ball or just about escape.

Good tackler. Hope he continues to grow. Crazy how players on the fringes can rise to prominence.

Consistency is needed but luck with injuries too. Just like Phillips from Liverpool replacing vigil and looked towering as well.

If I were his management I’d start getting him some traditional recognition like Rashford. A 26 year old Sir Rob Holding is a mean mature monster

The thing that encourages me most about this would be the fact that it sounded like a risk to play him. I wouldn’t expect that from arteta. I would’ve expected him to play mustafi in that situation. Seems to me that he wanted to avoid that. Not wanting to criticise the guy more than he has but I want us to move beyond him in his last season. If we’re short then play him and hope it’s a performance without errors and just his good traits but beyond that or europa league games I don’t want to see him.

With his age and the years of experience still can’t read the game well, zero anticipation.

I still think we are too slow playing out from the back. Need some Bergkemp one touches to slip the ball up swiftly and behind defenders for Auba or Nketiah to have a run on defenders like what make Owen so sussessful in his prime. Laca and Pepe losses cotton wool challenges too easily. We need more muscles to hold the ball at final third and make square passes at half spaces for midfield or wing back run ins like how Viera would with the invincibles. The good news is we have seen some positives from the impressive youngsters like… Read more »

I think we are heading in the right direction, we need one more sharp striker help Auba and Eddie

P.E. Aubamayang has been criticised lately about his performance. PEA should not be the target to criticise just because he ” fails” to score goals. It’s Alexandre Lacazette who should be question about his performance. PEA plays on the left, but AL pays in the centre of the attack. AL should deliver more goals rather than PEA.
In the match against Manchester United recently, all players played marverlously except Lacazette and William and Bukayo Saka is undoubtedly the man of the match.