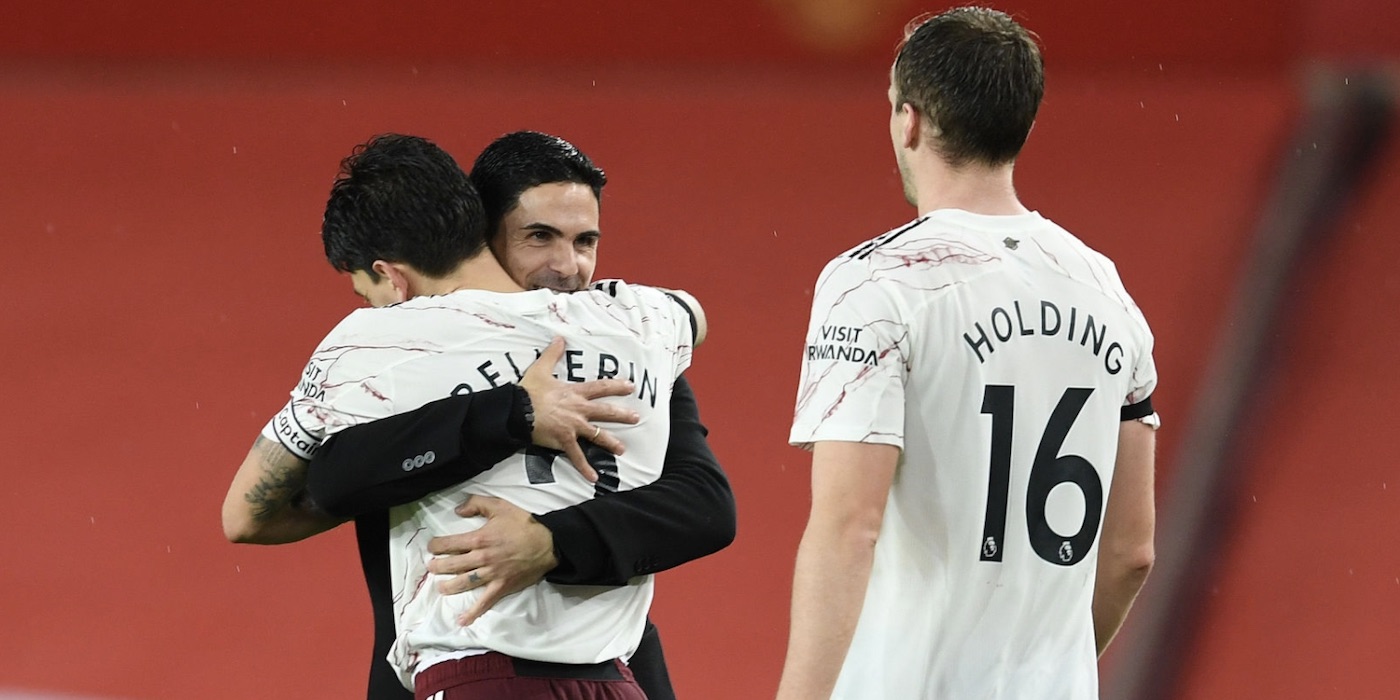 The last time Arsenal won a league game away from home against one of the so-called ‘Big Six’ was when we beat Man City 2-0 in January 2015.

Since then we’ve struggled on the road, but today’s 1-0 defeat of Man Utd finally put an end to that run.

It has been a long time coming, and after successive defeats to the aforementioned City and Leicester, it would have been understandable if today’s approach was more about not losing than winning.

However, Mikel Arteta’s team were brave, created chances, pressed high and were more than worthy of the three points.

Asked how it came about, the Arsenal boss told the press, “First of all, the belief that we created before the game.

“We wanted to come here and be who we are and be that from the first minute. I think obviously if you look at the performance, every player needed to be at their best and they were.

“They asked a lot of questions with the way we played, so I’m really, really happy with the performance.”

As for what it might mean for the players, he continued, “It generates the belief and it binds everyone together.

“Everyone’s going to feel really part of it because players who haven’t played so many minutes in the Premier League until recently will be involved.

“Everybody has to be ready and if we want to perform at that level, we’re going to have to use this squad. The fixtures are crazy at the moment and the physical demands are huge.

“Everybody has to be contributing and focused on what they are bringing to the team. That’s the question you have to ask of yourself. It’s not just on the pitch, it’s off it as well and in training.

“We’re looking at what you can bring to the team, how you can help and how you are contributing. I’m really happy with the team.”

The next step is to build on that belief and keep winning. It will be interesting to see if Arteta and the players can do it.

To be honest I did not expect us to win today base on how well United played in midweek and our recent results. Today we played with more hunger, beliefe, and we were very well organized. Our defence and midfield did an amazing job. We just need to be more clinical with our chances and make sure we see this Arsenal again every game. Full credit to Arteta and the team for the result today.

Happy to get the win today, great defensive performance as well. Did we ever look like scoring though?

You did watch the game right? We had about 5 solid chances of scoring, which is about 5 more than we had against LCFC.

Our immense pressure and blocking of passing lanes created far more turnovers in their half of the pitch than i’ve seen in months. I thought it a bit worrying that we couldn’t turn those turnovers consistently into dangerous chances. We created enough to expect to score, but we could have done better. All in all, i’m more encouraged by the creation of the turnovers than our inability to seize those chances. Hopefully the latter comes in due time.

Next match against AV. The Villa having suffered a low after putting 7 past Pool,will be looking for amarker.Arsenal dont seem to be able to kill off such teams.Thats why the ep is so competitive
. This inability could hamstring their effort to fight for 4th.

There was so much doom and gloom in the comments after Leicester, and I didn’t (still don’t) understand it. Performances are unrecognizable from this time a year ago. Our first mandate was improved defensive solidity, and we’ve got the best goals against record in the league. We’re two points off second, with away fixtures against Liverpool and the two Manchester clubs in the rearview. We all want more in the long run, but isn’t this clear progress amd vast improvement in a short time under Arteta??? I’m thrilled.

Dave
Reply to  Guns Up

Our fans are all reactive sad acts

I’ve gotta say that the reaction on here was quite shocking after the Leicester game, so I think that Dave has a point even if saying ‘all’ Arsenal fans is a bit strong.

Mcheza
Reply to  Guns Up

I think the criticism is fair and still holds. Auba and laca aren’t firing on all cylinders. I know what to expect from Willian on the right but the other two positions are still not firing. It’s also affecting team chemistry overall and fluidity in attack. Once there’s that you’ll start to see one touch and seamless movement. Brighton, Southampton and Chelsea are showing qualities of good attacking chemistry. How Arteta improves this without sacrificing defensive solidity is his task. We need to create chances more frequently. More direct take ons in and around the box. More shooting. Hoping MA… Read more »

A lot has been said about Arteta’s disturbing similarity to Emery, in spite of the fact that he needs support (*pleads guilty*) in the aftermath of the Leicester City frustration. This game has bought him a lot of leeway that had shrunk a bit recently, but as Biggles said, it’s important to sustain this now. We played this game like a Cup game. Would be happy to see us play another 31 of those

Jeez, we’d never be able to focus on the league with that many cup games! Are you mad?? (sorry, I’ll show myself out 🙂

Currently the best defence in the league. Let’s hope it continues. Really frustrating about Leicester game now though. Had we knocked them off we would be really close to the top.