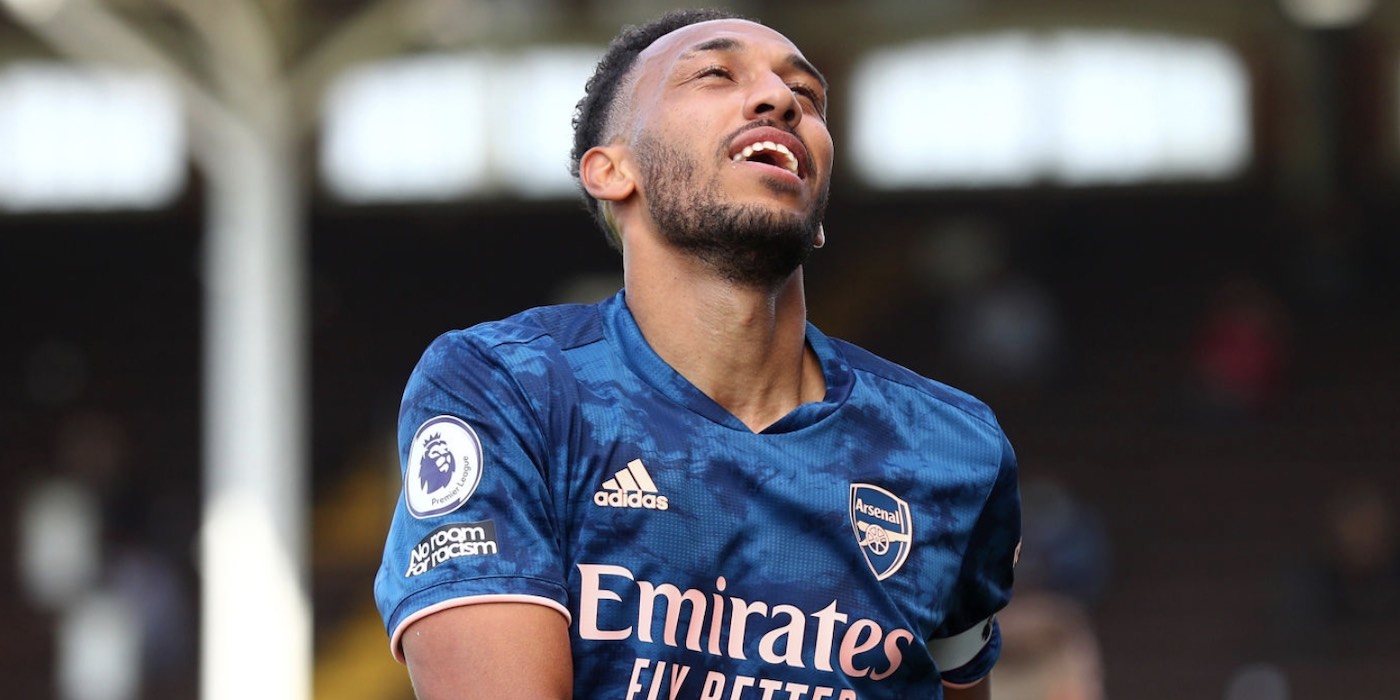 Mikel Arteta has backed Pierre-Emerick Aubameyang to find his form in front of goal and says he remains open to playing his captain in a central position.

The Gabon international proved talismanic last season scoring the goals that won Arsenal a 14th FA Cup on his way to an impressive 29-goal total. He even started the new campaign with eye-catching strikers against Liverpool – in the Community Shield – and Fulham, but since then has struggled in an Arsenal attacking unit that has looked very disjointed.

That his form has tailed off after signing a new big-money contract, coupled with Arteta’s insistence on fielding him on the left wing, has led to much teeth-gnashing amongst fans.

So what’s going on with Auba? And how do we get him firing on all cylinders?

“We need to help him more,” said the boss on Friday. “He knows himself as well, what he can do, the things he needs to improve in his game to be more decisive. That’s it. It will come.

“I’ve not known any striker in the world who for 10 years has not had a period not scoring as much. It’s how you navigate through that period and how quickly you come back to do what you’ve always done, which for them is something normal.

“Just take it in a natural way without putting too much pressure on yourself and as coaches, we need to find ways to help him as much as we can.”

As for playing the 31-year-old in his favoured central position. It’s not out of the question said the boss.

“We have to accommodate our players as you mentioned. It’s very important that the players build relationships, it’s very important how you adjust the attacking and defensive sides to get that cohesion as a team. Then these things evolve.

“There are moments when you have needs in one position and others with another position, but it’s always a possibility to [play Auba centrally].”

Bellerin: I really, really believe the results will come

This has to be tried out now. Lacazette has failed miserably to be our lone striker and while putting extra cover on the left side does give Auba some freedom, it just isn’t enough. Auba still has to often run back and compromise on his offense. This is a player with a golden touch in from tof goal, something that is prized beyond anything else in the footballing world. It would be a waste to not put him up front and let him do what he does best.

Trying it out for the sake of trying it out is ok. However everyone ignores the fact Auba uses his pace and finishing as a big tool in his game. That’s why he has scored lots starting his runs from the wing even to get in good position for a tap in. Let’s just ignore the fact that our game plan of playing it as fast as possible back to the centre backs and goalkeeper and then rolling it around as slowly and carefully as possible isn’t the problem. Even the best of attacking midfielders would suffer creating anything if… Read more »

A lot of truth in this comment, we all seem to have convinced ourselves that moving Aubameyang into the middle will magically solve all of our problems. While I do think it’s probably part of the solution for a number of reasons, the bigger problem is that our attacking approach is too slow and timid to hurt defences. Auba is more clinical than Lacazette but even he isn’t going to score 100% of the chances Laca has missed, and that’s what we’d need right now given our lack of urgency in the final third. As for Aubameyang as a CF,… Read more »

It is painful to watch Aubameyang puffing away after covering fullback positions. Also we need a more creative player on the left of attack to feed more chances.

Auba is also a lot better with is heading than Lacazette, probably due to height.

He’s a world class striker who used to just bang them in for us even when he was played out of position. Our attack on a whole was universally hailed as pretty shit hot. Our defence, of course, quite the opposite.

So now we are finally starting to turn our leaky defence round, albeit in a oiltanker kind of way but still, our attack drops its insides.

Why? How did that happen?

We are now playing safe, ultra safe ball. We were playing all out attack back then. Even Ramsey as one of the two midfielders protecting or supposed to be protecting the back four spent more time ahead of Laca, Giroud or Welbeck banging them in. We were good at quick breaks when the opportunity presented itself. But then we were shit at defending. Xhaka had to use his lightning pace to hold the midfield on his own and cover for everyone on the break and his desperate attempts got him booked or sent off. Our central defenders looked ridiculous having… Read more »

We certainly need to do something about Auba. It’s surely just a coincidence that his goals dried up around the time he got his massive pay rise. However, even if the overall tactics of the team are at fault (which is down to the manager) we could have expected a few more from him by now, I think. Perhaps the flood gates will open at Elland Road.

Is it just Auba suffering though? Ok Laca has been missing the one odd chance we have been lucky and fortunate to fashion but is it just Auba or the whole team when we transition to attack?

It would help if we had some creativity in midfield.

Only nine PL goals scored in 8 games by the entire team so far this season is deeply worrying. That’s bottom-half stats. I’d like to see Joe Willock start tomorrow: he’s one of the few midfielders who likes to push forward and who could get a midfield goal. Laca and Willian on the bench please.

We need to take the handbrake off tomorrow and have a go at Leeds: we don’t need to be cautious against weaker opposition.

FFS play him through the middle.

The No Shit Sherlock Award of the day goes to…

Moving Aubamyang into the middle is probably part of the solution to our attacking issues. It means taking Lacazette out of the firing line, whose poor form has indirectly impacted Aubamyang out wide. It means space for a more creative player that’s more comfortable playing wide. And it gets our most clinical player within the width of the sticks. But it’s not going to solve everything on its own, we need to quicken our attacks and get more support from midfield. A change in formation would be welcome, though is probably unlikely given Partey and Elneny’s absences. Also think we… Read more »

Laca, Willian, Pepe, Ceballos, Nketiah and most other players (barring one or two) with a tinge of offensive play to them are struggling simultaneously.
It isn’t a coincidence.
Surely, Auba central will not solve our offensive problems.

You only can help him

We understand the the situation of the team at the moment and we have to be solidly behind them especially Ateta,. Aubumayang will certainly return to his best form, it’s the same with every other strikers
Gunners for ever no matter what.