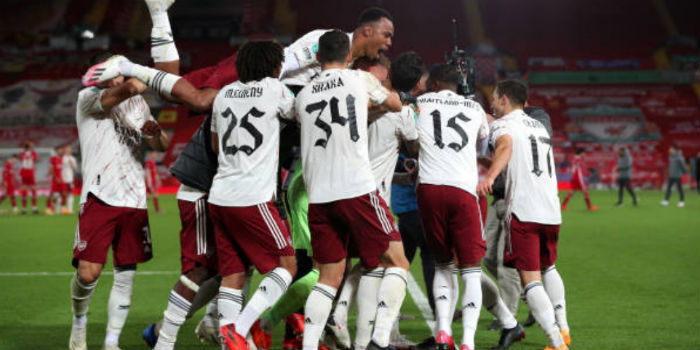 Arsenal’s Carabao Cup quarter-final with Manchester City will take place at the Emirates on 22 December.

The Gunners were drawn against the holders after beating Leicester and Liverpool just over a month ago.

The game, which will be broadcast by Sky Sports, will be the seventh of nine matches in December for Mikel Arteta’s squad; a schedule that bristles with difficult challenges.

TV selections for the month haven’t been made yet (rumour has it the PPV games will be scrapped) and our two matches post-Europe will almost certainly move to Sunday, so take the below schedule with a pinch of salt.

Yes, that is an insane run of games.

Certainly tough – we’ll find out just how good the squad is as we’ll probably need to use a lot of players. This is the kind of test that some of us have been concerned about, given the fact that Arsenal were unable to offload several of the players they wanted to in the recent window. It certainly won’t be dull.

Arteta has been adamant about saying we need everyone. This run of games will show our depth and fitness, which is not bad at all at this moment.

Fitness seems good currently but I’m still not sure about the quality in depth of the squad. Should we pick up injuries/suspensions earlier on it will certainly be a test as there’s a lot of potentially “difficult” games throughout that run. Anyway, we’ll see.

The entire season is giving Festive Run-In (TM) vibes. We have games every three days already, and it doesn’t seem to abate. This is very stupid planning, in general, regarding the schedules. 5 substitutes or 3, it is going to wring everything from the players, who will have WC qualifiers too, and then the Euro 2021 at the end of the season. Quite frankly, every team is going to need a 30 man squad instead of 25. The injuries we will see creeping up…it’s going to be horrible

We can play 2nd team academy players for the 2 remaining Europa League games, and play the same team for the Man city cup game. This should help with the number of games and fatigue with first team.

5 out of 9 games are at home,,,sp*rs away and Brighton away are not long trips. I think we will have a good December.

I just can’t see the Premier League making us playing matches two days apart, so I imagine the scheduled dates will end up being 3-6-10-13-16-19-22-26-29. Still an insane number of matches in a very tight timeframe. However, assuming we win at Molde on November 26, we’ll have clinched top spot in the group and will be able to blood a lot of youngsters against Vienna and Dundalk. We can use the second XI as substitutes and give the first XI a total rest during those matches. I don’t suppose we’ll put out a really strong squad in the Cow Cup… Read more »

Heavy schedule. I’d even be inclined to rest our entire first team squad for the Man City game – winning would be a nice bonus, but ultimately we’re risking burnout and injury on a cup where the prize is a place in the new Europa Conference League, which sounds like an awful competition to be in.

Am I the only one who thinks it would be a blessing for us to be sent packing from this tin pot cup?