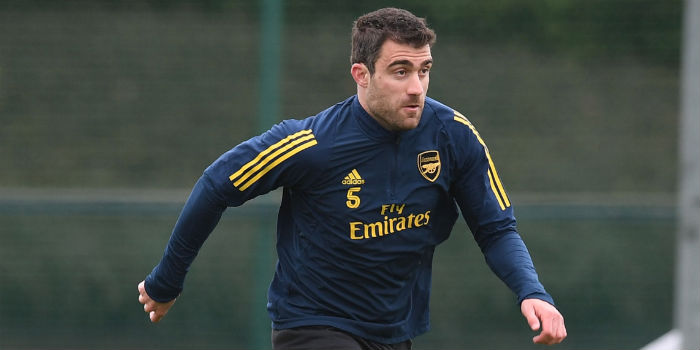 Five members of the first-team squad were in action as Arsenal U23s continued their resurgence with a 1-0 win against their Everton counterparts at Emirates Stadium today.

Emile Smith Rowe was on the scoresheet and played 45 minutes, while Sokratis made his first appearance of the season and helped Arsenal to keep a clean sheet.

Calum Chambers took another step in his progress towards regaining full fitness as he played 76 minutes and William Saliba received another runout with Matt Macey starting in goal.

Macey, a veteran at this level with 69 appearances, was called into action on a couple of occasions but Arsenal were mostly impressive and deserved their victory.

Steve Bould’s side were reduced to ten men in the 62nd minute when Folarin Balogun was sent off for a second bookable offence. The striker’s first booking came after he punched the ball away with the second the result of a dive.

With Arsenal having such a large first-team squad it seems likely that there will be further senior players involved at U23 level over the coming weeks, and players such as Pablo Mari and Gabriel Martinelli could feature at some stage as they edge closer to returning to action.

Being able to play alongside experienced players is undoubtedly hugely beneficial for Arsenal’s youngsters and it has also helped the U23s to discover some winning momentum, which has lifted them out of the relegation zone.

Isn’t it quite telling that Arsenal thinks it’s a good idea to throw in the likes of Sokratis, as they think it could be beneficial for they young lads, and Özil can’t even make that team?

Ozil has been banished to footballing Siberia. It’s a pity it has all gotten to this. Pity

It is, but still inevitable because of his attitude, I think.

You know absolutely nothing about his attitude, so keep your trap shut! The right to an opinion isn’t completely unconditional; it’s dependent on the related knowledge, which you just don’t have.

Not really. There are other, bigger and long-standing issues with Özil that have been well documented that prevent him from being considered for selection, least of all as a role model!

So Arteta lied when he said it was for footballing reasons…? Thanks for confirming.

The likes suggest that people thought I meant that as criticism towards Arsenal. I don’t. I completely agree with Biggles that it’s of course down to his dedication that you don’t want to have him anywhere near your talents. Guendouzi was his mate and we’ve all seen how that worked out. Can’t wait for the day his contract expires and we can finally move on from this very expensive , annoying mistake.

Hoping that ESR only playing 45 minutes is to save him for some first team action!

Ozil would rarely show up for Premier League away matches up north, I highly doubt he would be the least bit interested in playing for the Under 23s. If asked, he would be “ill,” or his back would be acting up again.

Go look up the word “rare” in a dictionary – you’ll realise what a stupid statement you just made.

Rare meaning 1. Not occuring very often 2. Not large numbers so can be of interest or value. 3. Unusually good or remarkable. So a bit like the word sick the young people use as in Ozil was sick again so missed another game up north or Ozil was sick again and had a great game up north. I know which one was used more often but I think we’re all sick of it now.

Why is it that only Ozil’s sickness and injuries are treated with suspicion? Relative to most footballers in history, Ozil hasn’t been a frequent absentee. Why haven’t Jack Wilshere, Jamie Redknapp, Andy Carroll ever been accused of “pulling a sickie”? They instead had/have so much sympathy from people.
Remember that before Arsene Wenger, Arsenal players missed games due to hangovers, cocaine addiction, or a jail sentence for drink-driving and knocking down a wall. These hypocrites, who we today must refer to as “legends”, have the audacity to question Ozil’s commitment and desire.

He is pure talent. We are a nuisness and his mistake in buisness eyes was talking about China’s treatment of its north people. Media tirned in him when he talked about racism and took a photo with turkish leader.
Football doesnt like politics..but we are the Arsenal..oops..but money (investors)own us!

Come on Luther, take down the aggression a peg, discuss the point, no need to be harsh a long the way. (From someone who agrees with you and would like Ozil at least available)

Just like you, I put a lot of importance on politeness and respect too. But are you seriously suggesting that the statement made by our friend isn’t stupid?! Does Mesut Ozil RARELY play in away games up north? Why do these people have to exaggerate like idiots?
During his Arsenal career, Ozil has played in northern away games more often than he’s missed them; so technically, he rarely misses Premier League away matches up north.

The whole Sokratis thing doesn’t sit right with me

I feel sorry for him but I’m pretty sure Arteta has told him about his chances. It was very plain to see after the break last season already. So it was down to Sokratis to find himself a new club. As he’s still a very capable defender, I can only assume the fact that he hasn’t found a new club, is down to his wage demands and therefore, he’s the guy who is responsible for the situation he’s in. If you rather play U23’s for a lot of money than professional football for less money, you can’t complain afterwards.

You make too many assumptions. He was going to Napoli who let him down at the last minute. He’s been totally professional about his situation and he deserves to find a good club in the January transfer window. I wish him all the best.

Lol I agree with both of you. He has behaved decently throughout his time at Arsenal and continues to do so. Nobody would begrudge him a move in January. However, if playing 1st team football was his only concern I’m pretty sure he could have found a team willing to take him on that could have found a deal with Arsenal. Clearly there are bigger hardships than picking up a reported 90k a week to turn out for our reserves occasionally.