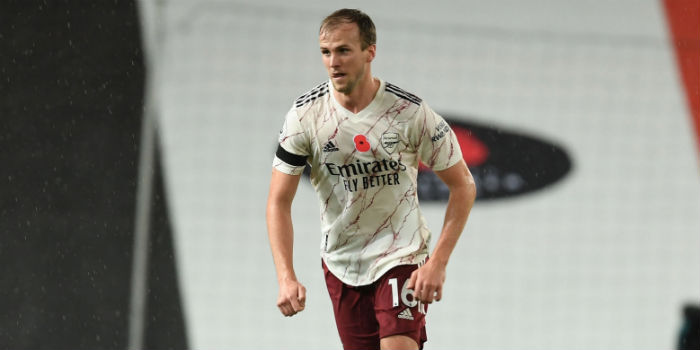 Rob Holding says last night’s 1-0 win at Manchester United was especially satisfying for him given the bad injury he sustained at Old Trafford nearly two years ago.

The centre-back, a boyhood United fan, suffered damage to his ACL ligament in the Emery-era 2-2 draw in 2018 and was sidelined for the best part of a year.

Struggling for form and game time on his return, Holding’s career at the Emirates looked to be hanging by a thread. Were it not for an injury to Shkodran Mustafi, the 25-year-old might have left the club this summer but he’s since built on a solid end to the last campaign to become an Arteta favourite this season.

“I’m happy with the performance and the clean sheet,” he told Arsenal.com.

“We’ve not won here in 14 years in the league so it’s nice to get that off our backs. The team’s just improving and hopefully, we can just keep this momentum.

“I knew it [our bad record at Old Trafford] from the past two years we’ve been here. The last time I played here was the ACL injury, so it was nice to come here and put that to bed to come away with a win.

He added: “It’s the team I grew up supporting with the family so it’s nice to get a result there.”

Like his teammates, Holding hopes the win fosters a greater belief in the camp after tricky recent away days at Liverpool and Manchester City.

“I think our performance at City was a good team performance and we just got unlucky with the result,” he reflected.

“I think now we can get that confidence from beating a top-six team away and then we can crack on.”

Great performance from the big lad. He rarely lets you down, especially in these big games.

He’s a more stable defender than Luiz, without the passing range and technical on ball quality of the Brasilian (well both Brasilians). Very solid guy. But hopefully with the more dynamic Mo’-Partey ahead of him that passing range isn’t so necessary, especially as Gabriel offers quite a bit of the passing of Luiz and is just an absolute beast defensively – best of the bunch. Good to have some options in defense that aren’t all mistake ridden, past their prime guys. Don’t forget Chambers was also really coming on before his own ACL tear. He’s going to need time and… Read more »

But can he play in a four? I’m liking the sound of him and Gab at CB, for home games especially. They have very different styles that could definitely complement one another. A bit like Kos and Per.

Holding still scares me a little when they’re passing it around in tight spaces to play out from the back, but I’d say even in the last couple games he’s been looking better at it — positioning himself better to receive passes farther from danger.

He’s definitely maturing as a player. His positional awareness has come on massively in the last 18 months. I think centre back is probably the one position where it’s still very difficult to come in a as a young player and hit the ground running (obviously there are exceptions but not many), and hopefully we will see Rob continue to develop and grow in the team for years to come.

Given that two of our key performers yesterday were signed for £2m and £7m respectively, I suppose we should give our club a little credit next time we bemoan the Pepe situation.

Both were bought during the Wenger era… he’s done it again!

He also bought Ozil (£42 million) and Mustafi (£35 million). Nobody is perfect of course, but we need to look at the transfer failures and the successes, don’t we?

Yes, but doing both isn’t mutually incompatible. The two players certainly look to be successes (and cost next to nothing, as you say) but that doesn’t diminish at all the cost of Pepe (£72 million) and the relatively (stress, relatively) poor return on that so far. You win some, you lose some. However, £72 million is still a staggering sum for Arsenal, which is very much an on-going cost as we’re paying the fee by installments at a time when the finances are very tight (tighter than when we bought him) and likely to worsen soon.

True, perhaps we went £30m over with Pepe. But then (and I pray I don’t curse them now) Tierney looks a steal, Leno looks a steal, Gabriel looks a steal, Martinelli looks a massive bargain, Partey looks like good business.

The sum of £30 we lost on Pepe has been more than recouped by these great signings.

The thing with Pepe is weird though. Say we paid 40m for him with a further 10m a year for two years if we make it into europe and perhaps a few other clauses over the course of the 72m timeframe people would hardly mention it. And he would even be considered not a record breaking signing. I know we screwed the pooch a little with the price but people act like we paid 100m for a non playing player, whereas it’s more like we paid 72m for a 30m player. (This is all subject to him not kicking on… Read more »

He has a great mentality, always ready to fight in the big games. Reminds me of Mertesacker – he does not excel in anything but is very solid and good in many different areas of the game. A good defender and seems to be a good lad. Keep it up Rob!

We dont call it the Mertesacker final for nothing!

To be fair we could call it the Mertesacker holding final. He was really chucked in the deep end that day. I don’t think anyone expected ether of them to produce the display they did.

Watch it again if you can. Holding showed great spirit, great determination, and worked incredibly hard, but Mertesacker saved him several times against Diego Costa (who, in fairness, was one of the most in-form strikers in Europe at the moment). It was the Mertesacker final.

He was the victim of another needless “airborne “ shove at OT.
Executed by a sly Rashford.
Rob came back two years later and put him in his pocket.

Mustafi of Valencia was actually good.

And we forget when he first joined he was immense – part of that 20 game (or something like that) unbeaten run we went on! And then the injuries hit…

For Valencia, possibly. For Arsenal, of course not. He has, overall, been a monumental waste of money – in the fee and wages since joining us.

That was Wenger trying out the Ex-Wife

This guy Biggles would surely have an unblemish record with transfers if Arsenal were to hire him as head of transfer/head negotiator (which is coincidently vacant now)..Anyway, just saying…😉😉😉😉😉

ACL is really a nightmare injury for athletes. Pre-ACL, he was clearly our best defender. Its taken him a full year to start showing glimpses of his old self. Same case with Hector. The consensus is after such an injury we need to allow this guys time to hit heights they were playing. So satisfying watching him and Hector right now. They deserve such a win after what they’ve gone through.

This. Thank you for this. ACL is probably one of the most terrible injuries sportspersons can have, and the aftereffects, even after recovery, seem to be ignored. Theo Walcott had it too, and he never was the same again.

U did good but got eclipsed by some outstanding performances.
Hope we maintain this level.

That ACL injury caused by Rashford’s challenge and yesterday Rob had him in his pocket all game long. Never gave him an inch of space

He had a great game. Thought he was injured at the end but he’s clever enough that he took time-out for some fluid intake.

Could Arsenal’s brilliant set-up have been a factor to their being poor?
A team that scored 9 goals in two games against good opposition are not that bad.

The bottom line is they didnt turn up last night. If they had put more pressure on el neny, he would not have been able to handle it. I mean we had it too easy.

P.S. dont worry I am not going to admit this in any non-arsenal forum. Just here.

Feeezedawg of Sweden
Reply to  Francesc

Nah, sorry but teams ‘turn up’ when the other team allows them to. Bottom line as I see it is we were better organised and tactically stronger.

Feeezedawg of Sweden
Reply to  Francesc

In comparison with the performance we put in, for sure. But poor opposition haven’t really prevented us losing games in the past though.

Biggles
Reply to  Feeezedawg of Sweden

That’s very true – but not this season really I think. That said, you play what you’re up against. We desperately needed the win yesterday and we got it. The trick now is to build on that and keep the winning streak going. If we lose the next game, much of the hard word and confidence from Old Trafford will have been diminished.

The only real concern from yesterday remains our relative inability to score from open play & finish off games. Hopefully Arteta figures out a solution to that as Leicester for instance should never have had the opportunity to sucker punch us.

Happy for Holding. A good solid performance. On another note could somebody explain the supposed joy players gain from winning against teams they support? I could not for the life of me imagine being ‘happy’ at winning against Arsenal.

I thought holding was immense yesterday, I think now he’s fit again there’s a proper player there. He’s one bloke I really want to succeed. Bad news for Luiz but tbh I’d like to see him in the rotation for midfield. He’s the best passer at the club and I think he’d do a job there

Welcome sight to see him back in and Cbacks did a decent job on the day against United. There were several moments of scare one from a superb pass from Rashford to Greenwood that eluded Holding and then there was the closing minutes when Van De Beek’s shot not closed down quickly enough hit Elneny ricocheted off of Leno courtesy of his face on thankfully onto post. The 3 at the back with Holding, Magalhaes and Tierney which easily morphs into a back 4 with Tierney pushed higher works well. It does however mean we have a left side bias… Read more »

Hmm. After this and the Mertesacker Cup final, I’m wondering if he’s actually the type of CB who’s really bloody good, as long as he’s paired with someone who can handle the thinking bit of the game for him.