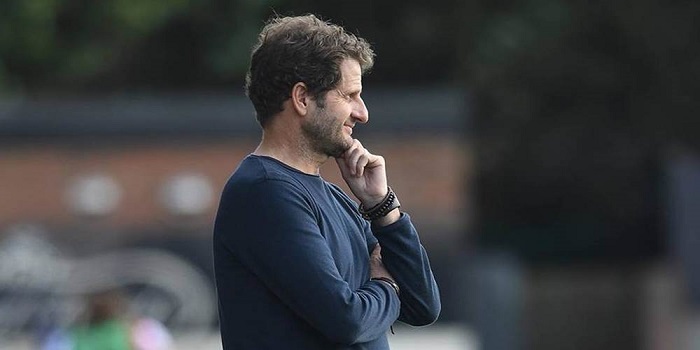 On Kim Little being subbed at half time…
She’s totally fine, it was pre-planned. The plan today was to manage everyone coming back from injury. We wanted to give them game stimulus back to make sure we got them off at the right time. We actually wanted to get Jill off earlier and we wanted to give Lisa Evans 45 minutes today too.

On why the second half was so different to Arsenal’s dominant first half…
First half was very, very good. I think it was one of the best halves of the season to be honest, we were in complete control. But when you have to tinker with personnel it takes the rhythm a bit. All credit to Tottenham they pushed us back more in the second half and got the rewards for it.

On whether the game meant more to Spurs than Arsenal…
We go out to play every game in the best possible manner to win, it was always going to be very, very tough to get into the next round with the amount of goals we needed and relying on results elsewhere. We did want to use it as a game to bring players back in and start reintroducing players coming back from rehab while also keeping an eye on players who are coming back because they will be going on international duty now.

On Leah Williamson making her 150th Arsenal appearance….
We’re very proud, she personifies everything we’re trying to do at the club, she’s an amazing character who wants to be better and is so humble, it’s incredible to be part of her development. I’m proud that we’ve given her the opportunities and we trust her and we hope she has many more games for us.

On Lia Walti making her 50th Arsenal appearance….
We can all appreciate the opportunity to see Wali in the Arsenal shirt but also the way she conducts herself and how important she is for the team. She’s infectious and when she’s not playing, you notice it. She’s an important part of what we’re trying to achieve and she’s an amazing person to work with. I’m blessed to be working with Leah and Wali.

On preparing for a game where Arsenal didn’t know how much they needed to win by…
The only thing we knew is that we had to win by for goals or more but it was always going to be difficult with the various scenarios and with games postponed, so we didn’t know. We compete in every tournament to win it and we have been in the final every year I have been here but maybe it’s a blessing in disguise because we know the fixture list is pretty brutal this year. The game was valuable to get players back in but it’s also a learning curve for us to ascertain our standards at all times because in the second half tonight we didn’t keep our standards.

I am not sure that Joe’s record in cup competitions has been good enough to be in the positions to just throw away possible trophys to win. And compared to Chelsea and City we have less games to play, so for us to complain about fixture list, is not good look. Also you can’t say you want small squad and same time say we don’t have enough players for all the competitions. Joe lost the right to complain about too many fixtures when he said he likes small squads and if he is judged by that, than so be it.… Read more »

It is too late to debate about our squad size and injuries now.. fact is that we dont have the squad to challenge for all trophies. It is not an ideal mindset to say it is a blessing that we are out, but it is as it is.

Between this game and the city semfinal defeat, the latter hurt more because it was such a limp performance and we would have every chance to win the final against everton.

I really don’t think the squad is small. There are lots of injuries which has had an impact but I think the small squad criticism is antiquated now. There are questions that can be asked over the amount of injuries but we have the same number of first team players registered as City and United and one fewer than Chelsea.

The way Joe is talking reminds me of Hope Powell just before she was replaced as the England manager. There was an air of resignation about tonight’s game instead of a positive mental attitude. Of course we will beat the Spuds we always do should have been the mantra. He knew we needed a big win to stand a chance but decided it was more important to integrate the players back from injury even though our next game is not until 6th December! Our job is not to get players fit for international duty! This attitude contradicts his statement that… Read more »

I said pretty much the same thing at the start of the season regarding Joe’s rigidity and stubbornness. The only rebuttal I got was that he had won the WSL so he must know what he’s doing.

With each passing match, this man is killing my enthusiasm for the squad. I don’t know if others feel the same

You did indeed and I was one who dismissed the comment at the time. Apologies!
I don’t mind a player or member of the coaching staff making a mistake as humans do, but if the manager goes into a game with the attitude that all is lost and we may as well use the match as a training session how does that instill confidence and enthusiasm into the players? But then to offer contradictory platitudes in the post-match interview by saying we try to win everything is treating the fans like fools.

For me this “intergrating players back” doesn’t hold up if you look at it. Until Ruby game on, it was all first team players who were brought on and who should be capable of beating Spurs regardless. Lisa, Jen, Beth who were the first substitutes are not some youngsters, but in case all of them, they are in contention to be starting 11 players. Why bringing those in, would have to mean, that we are not able to compete with Spurs suddenly. I am still all for Joe, but I don’t like this resignation talk at all. Any form of… Read more »

Frustrating, isn’t it? By Joe’s own admission we were playing well in the first half, whether you agree with him or not, so why bring on Lisa and Beats who haven’t played in a while and will not have the opportunity to play for Arsenal again until 6th December? It seems to me he was giving them match time so that they can play for Scotland next week and in the process disrupted the flow that we had in last night’s game that we desperately needed to win by a large margin. I agree both of those players would normally… Read more »

Didn’t Arsenal have to win the game by at least four goals to move on? Maybe at some point it was determined that that was not realistic. We had, what, a one-goal lead at halftime? I’m not going to get too exercised about the Conti Cup.

When he talked about reintegrating players he wasn’t talking young players, he was talking about bringing players back from injury and giving them minutes.

Wow what a difference a week makes! Last week replacing Jo was “Nonsense”, now Jill Ellis is in the frame, don’t time fly?

It’s a fair cop! Who’d be a football manager, eh?

Seems like the season for manager swapping with both the Spuds and West Ham changing theirs!

Tim, love the work and the exposure that you bring to the women’s team.. I have learnt a lot through you and Arseblog’s efforts… but this is not the first time I’m reading a ‘JOE MONTEMURRO REACTS…’ article with zero context. I didn’t know without digging around the hidden corners of arsenal.com that the game finished in a draw and the win was only on pens. I feel you (or another member of the Arseblog team) should be filing match reports and posting ahead of the ‘reaction’ articles.

Suggestion
On Arseblognews the womens coverage jumps from match preview to post-match comments. It would be great if at the top of this article was the score (and ideally team line-up) rather than needing to go searching on other websites to know the context in which the post-match comments fit.

Thanks for your increased coverage of the women’s team!

i came here to say exactly this. i’m not a fan of the women’s team – that sounds wrong: i’m just not that invested – but interested enough to see how they’re doing; just two sentences of context (result and implications – league table position, how far we’re off etc. / round of cup, next fixture) would be great.

Fair comments re: context. Shall do in future. For additional context, I can’t really do quick match reports because I’m not allowed to stay in the stadium once the interviews take place. I have to write these up on an iPad on a moving train, usually with frozen fingers! Realistically a match report could only be posted the next day and I just don’t think it’s worth it. Instead I do the analysis pieces with graphics cos I think it adds more value given all of the games (bar the Conti Cup matches) are available to watch worldwide. But yes,… Read more »

And Lia of course!

Well done, girls. A victory over Tottenham is always sweet.

Needless to say, my daughters were delighted! COYG