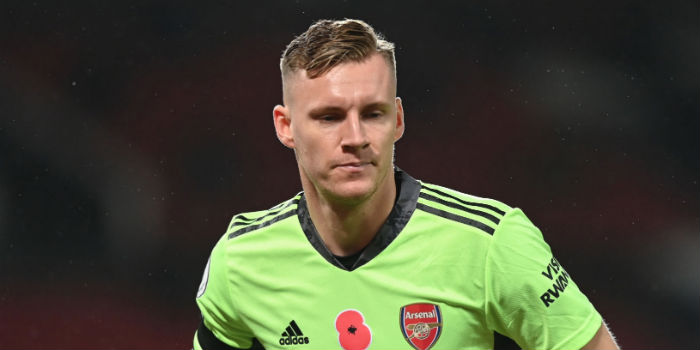 It might be early days, but after seven games of the Premier League campaign, Arsenal’s defensive record is unmatched.

For keeper Bernd Leno, it’s a sign that the Gunners are moving in the right direction under Mikel Arteta’s mentorship.

After tonight’s 1-0 win against Manchester United – our first in the league at Old Trafford since 2006 – the German played up the hard work that’s gone on behind the scenes over the last couple of years.

“First of all it was a very important win for us when you look at the table,” he told Arsenal.com.

“It’s been a long time since we won away against a team from the ‘Big Six’, and as well at Old Trafford. It’s been 14 years I think, so too long but finally we’ve done the job.

“It was a very collective, strong performance from us. Our players were brilliant and I think everybody had the right attitude and mentality to win. It was very hard for Man United to create chances.

“At the end of the day, this is the key. The collective performance and defensive work were really important tonight and I think we’ve worked on that. You can already see that it’s much more impressive than it was one or two years ago.”

Having lost three of our last four league games coming into the match, the Germany international was quick to acknowledge that there remains plenty of room for improvement.

“It’s a long, long process and we still have a lot of work ahead of us,” he said. “We need consistency. This season we’ve had a lot of good games but also some games where we could have done better. We’ll keep working on that though.

“We’re all doing a great job and the most important thing is that we stay grounded, we know where we come from and hopefully it goes in the same direction.”

The defence is becoming watertight, and long may it continue.

It’s certainly a lot better than it was but there’s always room for improvement. We need to score more though.

Best defense in the league.

I thought he did especially well with his feet tonight. Not one of his massive strengths and something he has been criticised for.

Such a great performance tonight. So glad that Elneny to Leno’s face moment hit the post though. Football is about such fine margins. Ah well, we deserved the luck after Leicester.

He also did better with claiming crosses. This is probably made his game between the sticks twice as easy.

Quietly had a very good game, looked very confident from set pieces and made an important save from Greenwood. Sly bonus points after Martinez conceded 4 earlier today (and 3 the game before) lol

Tbf to Martinez, there’s no keeper in the league who could have saved any of those seven. I still had the same thought though!

Tbf to Bernd Leno, if conceded 7 in 2 games like Martinez did, certain Gooners would march on the training ground with pitchforks

Also, has Leno even let in 2 free-kicks in his total time at Arsenal?

On one of the goals v Leeds Martinez pushed the ball straight in front of him for Bamford to score – the exact same mistake Leno made against Man City that people were moaning about.

It’s quite hard to judge how good at shot stopping a keeper is. A bad shot stopper can make average shots look like a great save, but a good shot stopper will make it look routine with better footwork/anticipation/reflexes etc etc Leno’s trigger to make the save is tuned to perfection. Notice how he almost never goes down too early and sent the wrong way (except penalties), or is left standing like a statue Emi might have great size and reach, but he just isn’t the same calibre of shot stopper. Not saying he’s poor at it, and there are… Read more »

I know Martinez had a good end of season but we quickly forget Leno having to make 5-10 big saves per game under Emery.

Ben EagerBeaver
Reply to  The Arsenal

TBH it would have been really craze to let go of Leno over Martinez. Leno oozes class without even stepping on the pitch.

Partey is a baller, and Elneny was awesome too

He’ll never cry, if that is what you mean.

Baller is a meaningless word, they all play with a ball.