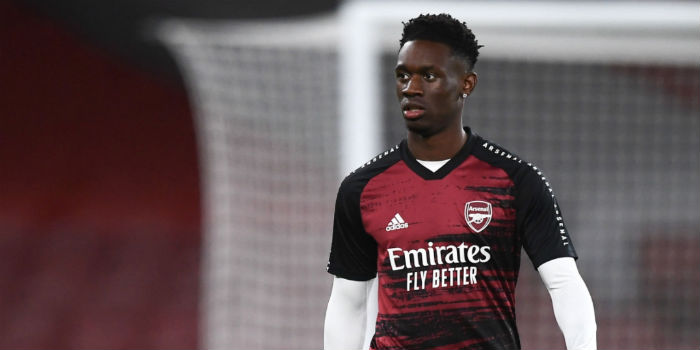 According to The Atletic’s David Ornstein, Arsenal have reopened contract talks with highly-rated striker Folarin Balogun.

Having reached an impasse in negotiations earlier in the year, the Gunners appeared to shut down the 19-year-old’s pathway into the senior squad and he looked nailed on to leave the club. Brentford are said to have made an approach that was rebuffed.

Since the summer, Mikel Arteta appears to have doubled-down on our determination to keep the attacker and he was finally given a first team debut in October as a substitute in the win over Dundalk.

“That’s why he was in the squad today and I showed him that yes, we count on him and we believe in him and if he wants, he’s going to have a future in the club.”

Arsenal will need to move quickly to persuade Balogun, who has represented both England and USA at under-18 level, to stay. Out of contract next June, he’ll be able to sign a pre-contract agreement with foreign clubs from January.

In the meantime, the youngster will be hoping for more senior experience in our upcoming Europa League group stage games. A loan move could follow.

A small piece of good news in the midst of the gloom. He really does look like a prospect so let’s hope we can hang on to him – although if we do, I don’t know what he’ll think, on recent evidence, about the club that he’d be staying at. Let’s hope Arteta and co. get a grip soon.

I’m surprised you’re not already trying to flog him off to ‘raise funds.’

Hopefully this will lead to seeing him along with Smith Rowe in action in the next Europa League game.

Let’s beat Molde in the next game and secure a place in the knock out rounds and then experiment in the last two ties.

I think he might climb above Nketiah in the pecking order if his heart is still in the club.
From the little I’ve seen, he looks a more rounded striker.

Good news, the kids are the only thing that gives me hope. Hope he stays on .

I genuinely think Balogun has a higher ceiling than any young forward we currently have at the club, bar Martinelli of course. Auba and Laca will soon be done. Keep him!!!

Hope u r right but Its easy to get excited over kids.
How many youth strikers have made it at Arsenal in the last 10 years?

I wonder how we can get this wrong?

I really beleive we should not have bought Willian but promoted Nelson and another youngster instead. I rather have a hungry but learning young than a washed up “experience” looking to retire at arsenal. Same for Cedric could have promoted/bought a young instead. For Mari i can understand because a good left footed CB for cheap are harder to groom/come by

Would help if Nelson could cross a ball though 🙂

I believe the potential of this lad is massive. We hope he signs the dotted lines.

Hope so but who was the last young striker to make it here?
Perhaps tbf we are due one?

yep sign up now, we a standard mid table team

At the moment certainly in prem games we are simply not creating enough for strikers.
Auba is one of the best in the world yet looks average.
We need to create more to decide if someone is good enough.
Im not 100% sure about eddie or laca but they are the type of players who need chances. if they are given limited service they will obviously look poor.
Same may be said about this kid?