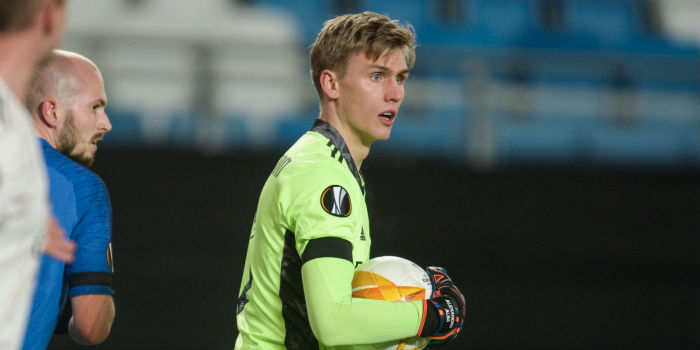 Alex Runarsson says game time is helping him build his confidence at Arsenal as he gets used to his new surroundings and teammates.

The 25-year-old kept a second consecutive clean sheet last night as the Gunners coasted to a 3-0 win against Molde to secure a place in the knockout stages of the Europa League.

Having been out of favour at French minnows Dijon not so long ago, you get the feeling Runarsson, whose recruitment was driven by keeper coach Inaki Cana Pavon, is finding the whole experience of playing for a massive club somewhat surreal. As you can imagine, he’s enjoying it.

After the win in Norway, he said: “I’m very happy. Playing away in Europe is always difficult, playing on an artificial pitch that we’re not used to…we did what we had to do. I’m very happy to go home with three points and a clean sheet.

“It’s good for my confidence to get minutes in with a new team, I’m learning to play…maybe not learning to play a different style of football, but I’m getting used to playing with the players I’m playing.

“To get a good game against a good opposition, to keep a clean sheet and win, it’s only good for my confidence and good for my overall improvement.”

The son of a professional goalkeeper – dad Runar Kristinsson was capped more than 100 times by Iceland – Alex was also quizzed as to whether his father was proud of his achievements and if he’d been passing on any advice.

“He’s always proud of me, what I do on the pitch and off the pitch,” he reflected.

“I try not to speak to him too much before games about football because he’s my father and I want him to be my father not my coach.

“I have so many other people that are working around Arsenal and my agent and other people I can go to for football [advice].

“My father is my father and we try not to speak too much about things unless I ask him his opinion. We’ve got a very good relationship.”

Arteta looking for goalkeeper solution, ‘probably in this window’

Seems like a very smart young man. And he only channelled his inner Almunia once yesterday.

All top GKs have an Almunia hiding in them, question is how often they let it out! The best ones hide it most of the times, can this young lad do the same? Time will tell, I guess.

I for one hope that he puts pressure on Leno very soon thru his performance(s).

Good to read. I just hope he realises that what he’s faced in the EL so far is not what he will have to contend with in the PL when, almost inevitably, he has to play in that some time this season (which is why our record in the two competitions is like chalk and cheese at present).

I don’t think there are many professional football players who don’t understand the difference between playing Molde or Rapid and facing Liverpool.

His dad was a midfielder, not a goalkeeper

He was pretty good throughout the match except for once where he came out as a sweeper keeper and missed kicking the ball out for clearance. Great game though. 2 Clean sheets, great start.

I wish him nothing but the best fortune with us, but (despite him being cheap) I’m still struggling to see why we brought in a 6 ft 0 goalkeeper. Very small in goalkeeping terms, particularly in the PL where aerial dominance is so important.

Alex is officially 185cm, thats 3cm less than Hugo Loris who has been pretty succesful. And í bet HLs height is exaggerated and he was measured in buffalo platform shoes. Fabian Barthez was even a semi midger. I believe in Rúnarsson!!!

Shay Given was 6 ft. Done all right.

Correction; His father (Rúnar Kristinsson) was an outfield player.

“My father is my father and we try not to speak too much about things unless I ask him his opinion. We’ve got a very good relationship.”

SarcasmB0t
Reply to  A P