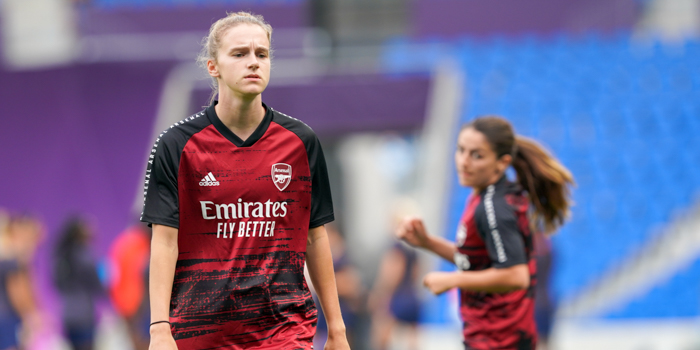 When Vivianne Miedema crashed the first of her first-half hat-trick against Spurs last month, she made WSL history, becoming the division’s record goal scorer with 50 goals, achieved in just 50 games. By half-time she had 52 goals in 50 WSL appearances. Miedema is a force of nature on the pitch but famously taciturn off it. I ask her if she is adjusting to a spotlight that she doesn’t gravitate towards naturally.

“I don’t think you ever fully get used to it but after being around for quite a long time now, you know what comes with it,” I ask her, tongue in cheek of course, if she has ever considered scoring fewer goals so that she doesn’t have to do so many interviews. “As much as I would love that, I don’t think the club would be too happy if I stopped scoring goals and I don’t think any other club would pay me either!

“I just need to keep doing what I’m doing and accept what comes with it. But it (the record) was one of those I was happy to tick off and move on. I am quite young but I have also been around for a couple of years now and you guys must get bored of me already! But it is pretty special and I am sure when I stop playing, one day I will reflect and think ‘wow, that was amazing!’

Ignoring the commentary, here is that record breaking goal from Miedema pic.twitter.com/9NqbUITqL8

Miedema is not a player that reflects too much on past glories, nor does she consider her goals individual feats but rather as the products of the collective labour of the team. Nevertheless, I ask which of her 52 WSL goals sticks out in her memory and she doesn’t have to ponder for too long. “I don’t have many favourites to be honest but the one that sticks in my mind is the one against Brighton the day we won the league (in 2019). A goal like that always stands out because it’s more than just a goal, because we realised we were going to win the league so that’s probably still the most special one for me.”

Turn your sound on for this absolute worldie from @VivianneMiedema 🤩#BestOf2019 🏆 pic.twitter.com/DLNYZymtdV

The story is well-told by now that Miedema is as happy, if not happier, setting goals up as she is scoring. Her father and grandfather both played as number 10s (she says that her father claims her goal scoring instinct comes from him, “I’m pretty sure it’s not,” she jokes) as she did until her late teenage years, when Netherlands moved her into the number 9 position. For such a prolific goal scorer Viv spends a lot of time away from the penalty area allowing teammates to move into the space she vacates.

Miedema says the goal scoring instinct came naturally, “I don’t really ever think about it, to be honest. The kind of person I am on and off the pitch is quite relaxed. I like to take my time and make the right decisions and that’s how I feel on the pitch. I think because I am calm I mostly know what to do in front of goal.”

As well as winning the WSL Golden Boot last season, nobody created more goals than the 24-year old. Therefore, Caitlin Foord has proved to be a natural partner for Miedema. Caitlin plays as a winger but likes to attack central spaces, allowing the Gunners number 11 to roam in search of the ball. Miedema says her partnership with Foord has blossomed naturally since the Australian’s arrival in February.

“It came quite naturally, I didn’t get to train with Caitlin much when she first came in because we went almost straight into lockdown. Coming back into pre-season it was obvious that Caitlin was someone who brought a lot of extra quality to the team and she really helps me. I really like the way she plays, she is really aware of what is happening around her.

“What is good about our connection is that I can drift over to the left-wing and she can become a number 9 and we help each other out in that way. It’s useful for me but it’s useful for the whole team and I think it’s working well for Caitlin too.” Too right, if only someone would write an article about it, eh?

Never Vivianne , I enjoy watching you every time you step onto the pitch in The Arsenal shirt.

You are a female Bergkamp even if you do play different roles and different positions.

Thinks it time for a Miedema shirt

Viv the 🐐
Reply to  Chalmers gang

Long overdue 😉
She was the only reason for buying a 2018/19 home shirt. I hated it, till I found out, that the gals absolutely rocked it. And I usually have people like Keown, Campbell or Gattuso, De Rossi on my shirts. Only “offensive” shirt I have, and I absolutely luv it. That one should still be available pretty cheaply on Sportsdirect in various sizes. Just saying because that’s the way I got it.
Up The Arsenal

I’d buy one for sure!

52 in 50 is such a stunning record. You said it! She is incredible and I am so so glad she’s at Arsenal. COYG.

Simp for Arteta
Reply to  Matthinc

Mine is called Victoria. Apparently “concordia crescit” was a bit too brave. I’ve settled 🙂

Can she replace Laca?

OdalGooner
Reply to  A P

Not sure Joe wants to swap, actually.

I so love this player. After Kelly l thought there will never be another Arsenal legend…. but here she is 😁👍

Give it another 10 years and there will be legend Leah too!