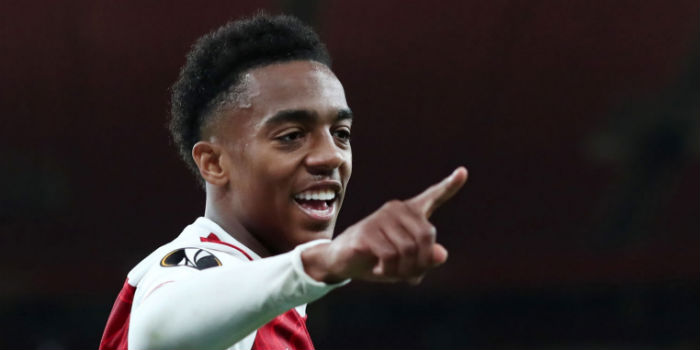 Mikel Arteta says he’s ‘very happy’ with the attitude of Joe Willock and Eddie Nketiah but wouldn’t be drawn on their involvement in this Sunday’s clash with Leeds United.

The last time the Gunners visited the North West, we secured a 1-0 victory against Manchester United thanks, in part, to the contribution of midfield partnership Mohamed Elneny and Thomas Partey. With both players out this weekend due to a positive Covid-19 diagnosis and thigh injury respectively, there are calls for Willock, a star of recent Europa League games, to be given a chance in midfield.

So far this season, the England under-21 international hasn’t played any Premier League minutes.

In his pre-game press conference, the boss was asked if that might change. He said: “I mentioned with Joe that I’ve been really impressed with him, the way he’s handled the situation of not having much game time in the Premier League.

“I haven’t seen him train like he’s done in the last five or six weeks under difficult circumstances.

“I think the reflection of that is the way he’s playing in the Europa League when he’s had the minutes, or the Carabao Cup in this case. He has a chance like everybody else to play on Sunday.”

Nketiah will also be champing at the bit to play. The 21-year-old was on loan at Elland Road in the first half of the season but had his time at the club cut short after not receiving enough game time.

“He’s another one that is fighting and knocking on the door every day,” said Arteta.

“I really like his mentality. He’s cultured, he comes into the training ground and he says ‘I should’ve scored four’ so that’s the type of ambition and hunger that you want from players. So again, with both of them and some others, I am really happy.”

In addition to the aforementioned injury worries, the boss also needs to weigh up whether to start players who’ve endured a busy Interlull. Kieran Tierney played three full games – including one that went to extra time – for Scotland and England kept Bukayo Saka busy with appearances against Ireland, Belgium and Iceland.

On the latter, Arteta said: “I’ll have to see today when he comes back how he’s looking and how he’s feeling.

“Obviously, he’s a 19-year-old kid and he’s played a lot of football in the last few months and we have to protect him. I understand from Gareth’s point of view as well, he had the injury of Chilwell and he probably didn’t plan to give him that many minutes but the circumstances forced him to do it.

“From my side, it’s not ideal, but if I was in Gareth’s shoes, I would have done exactly the same. It is what it is, let’s see how he comes back and try to get him fit and recovered and see how he is for Sunday.”

I’d definitely like to see Joe on the bench for Sunday.

Bearing in mind the lack of options, I’d like to see him on the pitch

Agree, we need to be more adventures and go for the 3 points. We can’t play with 11 handbrakes againts leeds.

Well we can, and we will.

Leeds play adventurous, organized, attacking football — and they’ve been doing that for quite some time now. We haven’t — if we suddenly try to play that way, we might bag a few goals, but we certainly won’t bag three away points.

Fuck that, he should be starting. He’s done more than almost any other player in for forward 6 this season to warrant a spot except arguably Saka. Nonetheless, I’m sure we’ll get Willian, Laca, Xhaka, Ceballos rolled out once again and a miserly 1-0 loss (with excuses of how home away fans would have saved us) or 1-1 (and how it was a big point against a really tough team). So much for optimism. We’re just an ordinary football team and Arteta is coaching like he is too scared to let the shackles off in anyway. Hard to get very… Read more »

We need to score more and some of that has to come from midfielders. Willock is the most likely out of all our midfielders to chip in with goals. I think he’s proven himself in defense as well. He’s a decent tackler and has non-stop energy. Elneny as the base, with Willock/Partey a bit further ahead would be nice to see.

I agree, Willock should be starting — he’s earned it, and with a void of production on the right, a need for a player to move in between the lines the way a #10 might, and the absence of Elneny and Partey, this all points to a cup of Joe. I am tired and frustrated with our football, too, but I don’t think Arteta is quiet scared the way Emery was — I think Arteta is cautious, conservative, but I think he believes we can beat anyone if we adhere to his system (and in some respects, I think he,… Read more »

If he doesn’t make the bench with Elneny and Thomas out, we really have a problem here.

and what about nelson. Arteta started him in his 1st few games in epl. seems nelson’s not training to arteta standards.

Nelson is an odd one isn’t he? I’m not sure that training is the issue and he’s has always struck me as a hard worker and tactically astute. Probably just that Pepe and Willian were ahead of him at the start of the season. But it’s harder to justify that after Willian’s recent shockers. He’ll get opportunities, he needs to ensure that he plays superbly each time.

He keeps getting injured unfortunately, got another knock on the knee before the Molde game.

If he’s healthy enough, his energy and pace could be very welcome on the left or the right, and he’s good at creating a bit of chaos. We could use some of that, at some point in the match, I’m sure.

Certainly a really nice option for us to introduce at some stage this season. I like that we have so many talented players who could mount a strong argument to start every game, it’s no bad thing. The challenge is to keep them motivated, focused and ready when called upon, but they do need minutes to achieve that.

He’s one to watch for sure, bags of talent.

Too much focus on attitude at Arsenal these days.

Too much focus on attitude all over the world nowadays.

Attitude and outlook IS life bro

Agree, would take a Ronaldinho any day. Plays himself on Playstation until very late at night or go out the day before a match, drinks heavily, vomits yet dominates the game.

I like Willock. As Arteta said recently, he offers something that’s in short supply in the squad. He can play between and break through the lines. The issue seems to be the system – if we play with a back 5, Willock probably doesn’t have the role that allows him to play to his strengths. Recently Lacazette has been filling the deeper space and almost operating in midfield. If we move to a 4-3-3 then suddenly Willock’s very much an option. He might need to remain patient until we get some easier home matches to try bedding in a 4-3-3.

While I understand the sentiment, games against clubs like Villa or Leeds who are likely to finish mid-table are must win games for us & ones we have consistently struggled in even under Arteta. It’s pretty clear those clubs have figured out that we can’t create if they just sit back (our offense really only works against big clubs as we just sit back and counter and even then relies on crazy conversion ratios) and then they can hit us on the counter. We can’t afford to keep dropping points as we wait for “easier” games to try to fix… Read more »

If I were Arteta i’d move to a back 4 immediately. But I can see why we don’t. I think part of the logic with the 5 is that both the wing-backs get into more adventurous areas of the pitch and stretch the play, whereas a 4-3-3 essentially means your two wide forwards need to be much wider (and that’s not good if Auba is one of them). Also, the wing-backs are much harder to pick up if they’re running from deep and if you only have Willock getting to advanced areas it’s easier to play against. Ultimately I think… Read more »

I think Willock can totally work with a back 5, just like Ramsey did when Arsene shifted to it. Less sure if Arteta would go for it though.

Sad about Partey and Elneny. I believe the formation and midfield against man utd, would have worked perfectly against high pressing Leeds. Hopefully the good old Ceballos Xhaka combination will work as well as it did pre-summer.

Willian taking a trip to Dubai so he can hopefully be disciplined for ‘non negotiables’ and thus creating a space for Willock to play is arguably his biggest contribution yet.

Who plays, how we play tactically can be argued over but we really can’t afford another loss when we travel to Elland Road – it would become a habit and very difficult to break the longer it goes on. Arteta is going to have to pull something out of the bag and if that means playing some youngsters, then give it a go.

We pray these guys are not knackered. Bated breath…