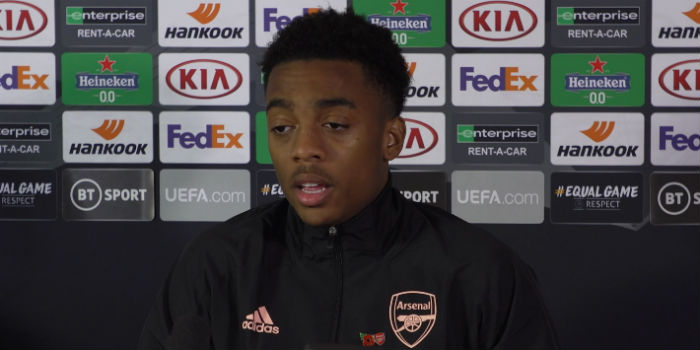 Joe Willock made more appearances for Arsenal last season than anyone else. Granted, he didn’t play the most minutes across his 20 starts and 24 cameos off the bench, but for a 21-year-old at a big club, that’s not bad going.

It’s not been quite the same this season. With strong competition for places in midfield and a return to just five substitutes in domestic competitions, he’s been restricted to two appearances apiece in the Europa League and Carabao Cup and not yet made it onto the pitch at all in the Premier League.

Despite the situation, the England under-21 international is staying upbeat, especially as he held encouraging conversations with Mikel Arteta in the summer.

Facing the media ahead of Thursday’s Europa League clash with Molde, he said: “I’m just going to continue working hard. I’m 21 years of age and I’m playing for the team I love. I’ve supported this team my whole life, so I’m not trying to look at it too intensely. I’m just trying to work hard and give the question to the boss.

“In every game I play, I need to ask the question, knock on the door with my performances. I don’t really like to speak, I like to show it on the pitch.

He added: “I always want to kick on, play more games and start more games in the Premier League and become the player that I’ve always wanted to be. I’ve just wanted to focus on doing that.

“At the start of the season, I had a few conversations with the boss and it was very encouraging. The manager is someone that I have a very good relationship with, I trust him, so I’m trying to work hard to have performances that ask questions.

“I thrive off competition, so when I had the conversation with [Arteta, about opportunities], it wasn’t something negative for me – it was positive.

“I wanted to learn from the players who were coming in and was training with every day, and compete with. I’m 21 years old and I want to compete with these players. I told Mikel that and it was very encouraging for him to support me and say if I play well, I’ll get the chance. That’s what I want to do right now.”

Asked if he might explore other opportunities further down the line, he made clear that he’s thinking very much in the short-term at the moment.

“I’m just focused on playing for this club, I’m trying to focus on what I need to do and tomorrow there’s a game and I’m focused on that,” he said.

“I’m not really looking too far ahead and I’m not looking back. I’m trying to knock on the door with every appearance I have and when the time comes – if that conversation comes – that’s a conversation that has to be had.”

Much better than having discouraging chats with the manager, I should think: Anyway, suitably encouraged I hope he presses on and turns in some good performances when offered the opportunity.

The highest hopes I have for willock are that he becomes an Aaron Ramsey like player that makes well timed runs in the box and produces goals from the midfield. Hopefully better defensively than Ramsey too.

I hope he stays on and grows with us. I really like his playing style, creativity and spontaneity! I think he’s a smart thinker on the go. Good vision and confident!

Let’s hope he gets more chances to start in the PL.

Did he just call Arteta by his first name?
Whoa.. somebody hold back Roy Keane..