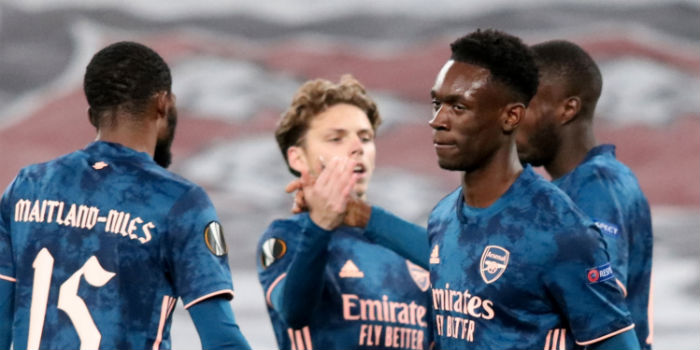 Folarin Balogun wants to extend his contract at Arsenal, according to Mikel Arteta.

After a lengthy contract standoff that nearly led to the 19-year-old leaving the club in the summer, the Spaniard has gradually integrated the striker into his first team setup in recent weeks.

Three appearances substitute appearances in the Europa League have already yielded two goals; the latest of which helped the Gunners to a 4-2 win against Dundalk in Dublin this evening.

After the match, the boss was asked if any further progress had been made in negotiations with the Academy graduate.

“We are having some discussions with the player,” he said. “He knows we want to retain him at the club.

“We know the length of his contract at the moment is an issue but we are trying to resolve it in the best possible way.

“We want him to stay and he told me he wants to stay at the club so hopefully we can reach an agreement and extend his contract.”

On the youngster’s performance this evening, he added: “Yes, he’s done really well. Every minute he’s been on the field, he’s been superb. Today he looked a threat again, he scored a goal, he set up another one and he looked really lively and mature.”

Plus, he holds the ball up like… no one in our squad.

He deserves all the chances Nketiah is having in the EPL.

Eddy has bags of talent, lots of people on his back of late but the kid is a poacher and has scored on a regular basis all his life .
However I think Balogun is a better fit for the kind of team we aspire to be good size ,good movement .

Does Eddie add vinegar to the boiling water first?

Whoah, that was pretty lateral.

he didn’t say eddie was no good. but eddie is pretty one dimensional. he is very slight. not much good at linking the play. cannot play from out wide. pretty much all he does is poach goals. that’s not to be dismissed but it does seem to me that balogun has “a bit more about him”…

He looks better and stronger than Eddie !

Honestly speaking, Eddie is more of a one dimensional kind of player and can easily be contained by a good and clever defender. But Balogun ticks all the right boxes as a fully equipped stricker and will probably bring more to the team. He’s definitely someone to watch out for in the future. Obviously a star in the making (if properly coached and managed).

Since we need different types of forwards for different opponents and situations in the game, it’s good to have both of them on our roster, and I’m so happy they’re academy graduates who are getting their chances and taking it!

All this criticism for a 21 year old academy graduate who’s also our top scorer.

Why can’t people be happy we’ve got multiple talented young forwards coming through rather than doing one down to hype the other?

We may as well throw him in against Burnley.

He couldn’t be much worse than what we’ve seen so far.

Give Smith-Rowe or Willock another run out in the league as well, they’d do well to perform as badly as Willian + Aubameyang.

Sorry, I disagree. He is too young and would get hacked to pieces against Burnley. We don’t want another Jack Wilshere on our hands.

I would love another Jack Wilshere without the injuries. Sad to think what a great player and captain we lost because of injuries

Good, we want him to stay also, now sort it.

I still have high hopes for Arteta and i think when you see talent commit it’s a positive sign he’s getting buy in from the players.
Here’s hoping the youngsters get the blooding they need in a better performing team 🤞🤞🤞

Looks like a proper center forward more better than Nkatiah in holdup and like up play. Uses his body shape very well and can also run behind defenders

Santori
Reply to  Once a gunner

True but my issue with both is size. Actually more keen to see how Tyreece JJ develops. Also Martinelli coming back.

Won’t be space for all of them.

It will be a mistake to prematurely ejaculate and give players contracts based on one or two minnow’s europa league performances. more needs to be seen and weighed. They won’t get as much joy in PL.

People need to clear their heads a little.

Nobody really loves premature ejaculation, right? Unless you are an OBGYN wanting to get paid.

Get him on the bench minimum.

Please give him a fare contract. He reminds me of the big young guy at Chelsea that is having a good season and I am sure our boy will become very GOOD.

Competition will be tight. Aside from Nketiah, we will also have Martinelli back in. Easy to be wowed over minnow’s league but that said if he keeps producing, he will have to be noticed. Held the ball up decently for us today. That said, still feel a lot of the players seem very limited in their distribution vision. When a quick pass could release compatriots, they are still opting for the safety first approach to what is in front of them. Often with back to goal, it means a ball backwards. More can be done with situational awareness. Many of… Read more »

Instincts coaxed out of them ? If it’s instinct it happens naturally Ccaching can & does make you a better player but in the penalty box where it really matters the exceptional player sees a picture before anyone else instinctively ! You can not put a value on that & I’d suggest Eddie is instinctively a poacher Balugon has an aura and looks clinical & Martinelli has no fear he feels he’s the best !What I’d say is that trigonometry maps sat navs coaching manuals can’t teach what’s in you only refine rough edges in other areas. It’s the flaw… Read more »

I wouldn’t mind playing the kids in premier league instead of willians and xhakas .. may be am just bored but also pretty confident that we won’t get relegated..so nothing to lose

I thought both produced really excellent finishes tonight. No reason to go down a one or the other route. There is room in squad for them both. I did think Balogun had a very impressive 30 mins. Looks strong and aware of what’s going on around him and like I said a very confident first time finish into the far corner. Good news

Not sure how anyone could downvote the comment by Dave cee?

Because there isn’t really room for both and that’s one of the reasons that Balogun has 6 months left on his deal. A squad can only really carry one young central striker who can get substitute minutes under his belt, especially as neither of them can really play wide.

If AMN and ESR were given a run in the team , even tho it was only Dundalk , I thought they linked up together superb at times , a partnership that could flourish given games , also what more does elneny have to do to get a start in the prem

The biggest difference between eddie and bolugan now is the looks. One looks like danny welbz when he misses or when things dont go well. The other reminds me of the kind of aura a striker should have.
I’ll keep them both and play 442 though.

he’s still a bit raw around the edges but looks the real deal; has a Drogbaesque aura about him, it would be great to have someone who can bully the opposition’s defence into submission, and he seems the person closest to this compared to all our other strikers.

People are talking a lot about the strikers but I want to see Soares for Bellerin and Elneny for Xhaka. Also, we have to play AMN too.

He’ll need to have a great desire and a top professionalism to become a main man at Arsenal because the biggest clubs need a cut above. If he uses his spare-time to further improve his game then he could make it, that’s the difference between the very good players – to the best players, what they do in the time when knocked off